Being related to a famous scientist is only a good thing if he isn't credited with robbing the world of colour and the ability to enjoy music. It was decades ago that Nikola Tesla's ill-fated experiment flooded the world with "Ether Radiation" before he vanished, and people still can't decide if it was an accident or an act of malicious genius from a budding supervillain. Marie Tesla has spent her life trying to unlock and reverse her great-great-grandfather's mistakes, but she's not having much luck... until the day Tesla starts talking to her through a temporal rift and coaxes her back in time, that is. Tesla's Tower: The Wardenclffe Mystery is a high-adventure hidden-object game from Persha Studio that combines excellent cinematic camp with a great light-hearted mystery for a time-travelling adventure you should definitely check out. Plus, it gave me an excuse to make a banner image with ghost/bubble Tesla talking on the phone. Win! What are you waiting for? Allons-y! 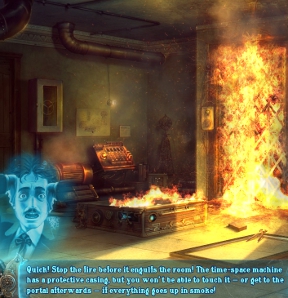 In order for Marie to uncover the truth about what really happened all those years ago, she'll have to team up with her wayward ancestor to unlock the secrets of his inventions and go back in time. It turns out not everyone appreciated what Tesla was trying to achieve, and treachery might be afoot! As Marie with, eventually, your trusty sidekick holo-Tesla (yeeesssss), click around to look for clues, solve puzzles, and gather items. If anything in your inventory can be combined, it'll happen automatically, and you can click the glowing orb on the bottom-left when it's fully charged to point the way to your next objective, or find a random item in a hidden-object scene. Marie's journal will keep track of objectives as well as offer up a handy map should you get lost. 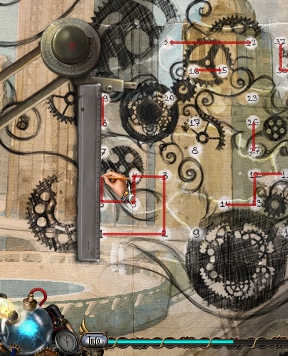 Analysis: With its heavy emphasis on light-hearted adventure and goofy time-travelling story, Tesla's Tower stands out from the usual sea of darker themed games and shouldn't be overlooked. It's not particularly challenging, both because of a generous hint function and clean area/puzzle designs, but it engages and entertains at a pace not usually seen in hidden-object adventures. Tesla's constant chatter and animation makes him a likable companion, and the mystery you'll solve constantly evolves with characters, plot twists, near-death experiences, and more. It's just a shame it doesn't offer anything as substantial in regards to the gameplay, which is by itself fine and dandy, but never really does anything to surprise you or differentiate itself from any other title in the genre. But, man, come on. Mystery solving with Nikola Tesla? Beautiful visuals? Murderous scientific conspiracies? This is just the ticket if you're sick of grim, dark games and want something fun and energetic instead.

The large amount of dialogue and straight-forward gameplay might put some players off, but Tesla's Tower: The Wardenclffe Mystery is still worth checking out. At around four hours or so for a playthrough, it's a satisfying length, and the focus on plot and characters is refreshing. Most importantly, however, it's something different, and if you prefer games with a greater emphasis on more traditional adventure gameplay with a sprinkling of hidden-object scenes, you should probably check out the demo here. It's just plain fun, and though it might lose points with history buffs for its science-fiction treatment of Tesla or not mentioning the source of his genius, it's a rich, engaging experience of the type I'd like to see more of in the future.

Place the LITTLE KNOB (beside the machinery lever at the Assembly Room) on the On/Off switch.

Place the LITTLE KNOB (beside the machinery lever at the Assembly Room) on the On/Off switch.