The great world is tearing itself apart. Every living inhabitant is doomed to die with the planet. A small group, however, realizes they must find The Maker, of whom no one knows if it truly exists or not to plead it to help save their planet. So off our heroes go to find help and information so they can beg The Maker to save the planet. You'd think everyone would be ready to be on board with this plan to save everyone's lives, but apparently talking is done through the sword and fist. Prepare for battle on your iOS and Android devices, with Mistwalkers new mobile battle game, Terra Battle. This tactical puzzle roleplaying game, lets you strategically plan your party and crush your foes, all while enjoying beautiful artwork and a deep in-depth poetic story. Mysteries unfold while you add more and more powerful members to your planet saving group. 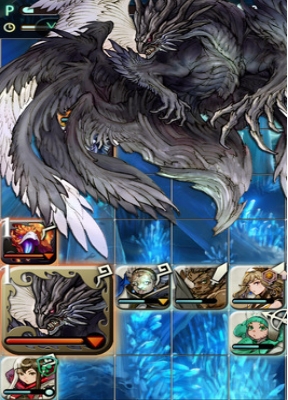 Set on a grid system, your goal is to get two of your units flanking one of the enemies. The more units you have on the same row or column, in clear line of sight of either of the main flankers, the more bonus you get to the attack on any enemies in the middle. The difficulty comes in when you can only move one of your units per turn, though you can pick them up and pull them anywhere on the screen until your time runs out. This may not seem too helpful until you realize that as only one unit can be in a box at a time, moving your unit into an occupied box pushes the other unit into the place the unit you're dragging around was just in. Using this method you basically can bully your allies to where they need to be as long as you're going fast enough. The grid is not always a friendly place, however. Spikes take a jab at your character every time they move over it, and some monsters have abilities to stop your units dead in their tracks, like the frogs who leave their sticky slime trails to keep you from going further. It causes you to have to be very cautious while you're drawing curlicues on your screen to dance your characters around.

You can have up to six units in your party at a time, and these allies can be awarded to you after battles, though typically you have to purchase them in the taverns using the gold you earn beating your foes. Getting a character is random, adding the excitement of a risk when you go to see who has answered your ad for a fellow flanker. If you get the same character you have before, that character just gets major bonuses, and so no money is lost. Most of the gameplay is battling... even the mini side-adventures are just battles for different gains. If you like puzzle battle games this isn't a bad thing at all, since every round is a new challenge to find the right way to get your units where they need to be and enemies with different powers. With new skills being gained as you level, planning your attacks is a new problem to be faced every time. The only annoyance this game has is that you have to be online to play, but this game is rather intense, so playing it while you're on the run around town probably isn't the best anyway. It's better for those down times at home or the long bathroom breaks. With a game this beautiful with a well thought out storyline, you'll probably be finding all sorts of reasons to escape into the bathroom, if just for a few more rounds.