It's a mad world out there with werewolves, vampires, mutant rats and more zombies than all the others combined. But thankfully there seems to be an equal amount of bullets and endlessly flowing alcohol so at least we can join in that madness and have one heck of a time. IriySoft's Tequila Zombies 3 has our two heroes, Miguel Tequila and Officer Jaqueline, finding a third party member who convinces them to take a detour from safety to gain a powerful...thing... but the path will lead them through more zombies than ever before. And what more could you ask for in an action shoot 'em up game? How about upgrades and unique character specialties, and secrets that are hidden throughout the game? Yeah, they got that too. [WAD] or the [arrow] keys moves your character and jumps, while the mouse is used to aim and shoot. Hitting [R] will reload, while [1] to [4] or [Q] and [E] will cycle through weapons, and the [spacebar] will activate your character's special power, with [S] used to search for things. The game plays like a classic beat-em-up sidescroller, and you choose your character to play through it... zombies will come in waves from either side of the screen, and when you've killed them all, you can move on to the next area. In addition to cash you can spend on upgrades between levels, they can also drop special power-ups, like peppers that double your damage! You need ammo to use any of the weapons you find, so if that runs out, you'll default to melee until a zombie thoughtfully drops some bullets upon death. 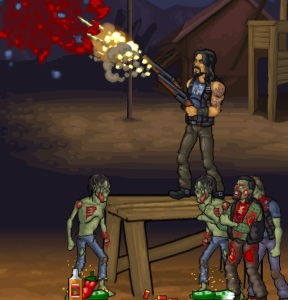 Depending on your taste, the sheer amount of cheesecake from female characters in this game as well as the adult magazines you find for upgrades might be a bit much, and the cultural stereotypes on display could also be hard to swallow. Still, Tequila Zombies 3 has some great humor and fun pop culture references hidden in the mix. Who doesn't want to fight off a vampiric Lady Gaga in her infamous meat dress? Or my favorite zombie, a plumber in overalls, green shirt and hat and a little mustache. Some of these referential characters are obvious to pick up on, and others are a little more subtle, but even if you don't get all of them there is still a lot of violent fun to be had with lengthy levels, multiple bosses, and characters with their own unique weapon type. This is the third game in the series, and you're just kind of thrown into the story, but honestly it's not hard to follow and the game can be enjoyed without it. There are lots of check points within the worlds, which can prevent you from going back to replay specific levels. You can only start the whole world over again and go through the levels you already completed. It makes it a bit grind-y, but you'll need the extra money you pick up to buy better weapons. Tequila Zombies 3 may not be everyone's cup of tea, seeing as it's more appropriate to say everyone's shot glass of hard liquor, but for those who can handle their drink it's a good time waster with plenty of gun battles and lots of zombie killing.

main issue with this is the awful game mechanics, I'm not sure it was well thought through needing keys to move but mouse to aim (and those flying things move FAST!).

Perhaps if the hit boxes were a tad larger (actually a LOT larger) this might be more playable.

The waves feel too long and knowing you can change character might be helpful on that main screen.

Pretty fun. I played with a track pad and didn't have any real problems. I do think that some characters are stronger than others and make it easier for them to beat the game, but seeing as you can swap whoever you want to be out, its a minor gripe.

3,153 Views
0 Comments
chrpa— Jayisgames needs your help to continue providing quality content. Click for details Welcome to the Roundup 34 with three games! As mentioned in the previous roundups, only odd-numbered episodes are featured since even-numbered are for Robin Vencel's patrons. More...  ...