While diabolical strategies and complex gameplay can be satisfying, Imangi Studios' smash-hit action-arcade game for iOS Temple Run illustrates that your beloved mobile device really is the perfect vehicle for delivering breakneck action in fast, frantic doses that keep you coming back again and again. Simple, sure, but an instant addiction world-wide, it was immediately embraced by gamers looking to have their reflexes challenged the good ol' fashioned way... fleeing from blood-thirsty monkeys through endless ruins with a pilfered golden idol. Now it's back, bigger, and badder than ever with the free sequel Temple Run 2, featuring everything from overhauled graphics and music to new locales, new obstacles and special abilities, and one very big, very angry, skull-faced monkey. Sounds like a party to me! 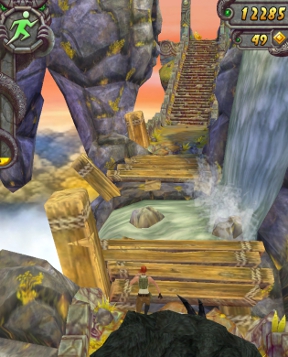 Gameplay is, essentially, exactly the same was before. Keep running, grab coins, and don't stop or you're monkey meat. Tilt your device left or right to have your character move in that direction, and swipe to either side to take corners and choose paths. Swiping up will let you leap, and swiping down will cause you to slide. Behind you, of course, is the aforementioned angry monkey, and you really don't want him to catch up. Bumping into some obstacles will make you lose momentum, while some, such as cliffs, spinning spike pits, blocked mine paths, and more are instantly fatal. (If you're the sort of person who can survive a plummet into whirling blades and crushing blocks, why haven't you called Stan Lee yet?) If you have any gems on you, you can choose to spend one (increasing by one each time you use it per run) to be saved and keep running. Of course, failure is inevitable, but don't worry. You can spend the coins you nabbed on upgrades, and even new characters to play as. If you're impatient, you can choose to buy more coins or gems through the in-game shop with real cash.

Temple Run 2 wins a lot of points for focusing on improving almost every aspect of the original rather than overhauling the game to change it. It's still the same, wrist-breaking, addictive game of avoiding death by the seat of your pants, but now it's just... better. The visuals are nice, with eye-catching backgrounds, although if you're like me you're glad to hear the music change from the annoyingly repetitive loop of the first game. The player-activated power-ups are a nice touch, allowing you to use helpful abilities by double-tapping the screen, and it feels like there's more variety to the things you encounter overall. But is it perfect? Well... not quite. Most of the objectives are, unfortunately, fairly repetitive and tend to boil down to "spend thus much", "go this far", or "get this much". There are also a few minor bugs (that will no doubt be ironed out) and frustrations, such as occasionally falling through a bridge when you try to leap across a gap, or rubber-banding off the side of a wall just enough to plummet into the abyss along a narrow edge. But ultimately? Temple Run 2 represents some of the very best "never gonna give you up, never gonna put you down" arcade action your iOS can get. It's breathless, fun, addictive, and full of more of everything you loved about the original. So go on, try it. Just... make sure you've completed any obligations you needed to do today first. Trust me on this.

Whenever an app behaves like that, try rebooting your device. Usually works for me.

Not available for Android yet. There is a "Temple Run 2" app listed by Lmangi offering wallpapers and possible spyware. Imangi might want to check that.