David Thorburn is a British freelance designer with several years of game development experience behind him, and he has successfully applied that knowledge to the Flash environment and designed several low-bandwidth games with impressive 3D perspective. Featured on his personal website TeaGames.com, David delivers a bit of elegance in his takes on classic games such as: Pool, Air Hockey and Archery, among others.

In 3D Pool, it's a race against the clock to sink as many balls as you can in 3 minutes. Sink the black ball last for a bonus and avoid scratching, as the latter will deduct points from your total. David demonstrates his mastery over 3D graphics in Flash by allowing freedom of perspective when lining up a shot—simply click and drag the mouse to change camera angle—and with cinematic camera effects when showing each shot. A straightforward and accessible game to pick up and play, with a high score list to one-up the competition. Very nice implementation. Click.

Air Hockey is not only a fast paced game, it is also a race against the clock. You have just 3 minutes to score as many goals as you can. Four increasing levels of difficulty, ranging from Beginner to Grand Master, reward points on a sliding scale with each goal scored. Control is performed with the mouse, moving it moves your corresponding air hockey stick on the table. Intuitive control, realistic sounds, and authentic looking scoreboard all make this game an excellent implementation. Click. 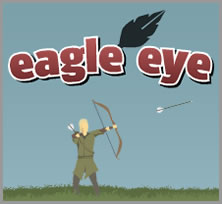 A variation on classic trajectory games, Eagle Eye is about archery, and yes, a race against the clock. Each level presents a task that must be completed within the time limit, such as hitting the target board twice in 45 seconds on the first level. Some tasks have you aiming for another archer, requiring two hits within the time limit to move on. Points are deducted if you are hit by the computer AI archer. The mouse is used for controlling the angle of each shot, and there are several different arrows of various weights to use to affect the distance of each shot. Arrow keys on the key board allow camera movement to view targets and distances. The game has smooth fluid motion that exudes elegance and polish. Click.

Check out David's other games on his TeaGames.com site where he claims to be working on even more games soon to come. Click.

can i download this game????
i really like it
but it's a bit slow i think
only in the beginning and in the end it's faster

You may want to make sure no other programs or browser windows are open while playing.

Other than that, these games do not exist on this site, and therefore they are not mine to offer as far as downloadable content is concerned. You may want to contact David Thorburn directly, his email address can be found on his TeaGames.com website.

i like these games they are fun and i enjoy playing them in english at school when i am surpost to be listening to my teacher. all my other mates thgat are siitng around me enjoy them to. thanks t games

This site is mint and all the games rule

Excellent game! I wish there were more levels. My one complaint is that it is SO SLOW.

nice site, we are all using it at our skool! its the only 1 that works...

nice site ONLY the one that works without being BLOCKED out our school UCA !!!

i like your games but you need more games

I really like Eagle Eye, but am a bit disappointed because if you get really far, and lose, you must start from the beginning. It kills all desire to continue playing after that.