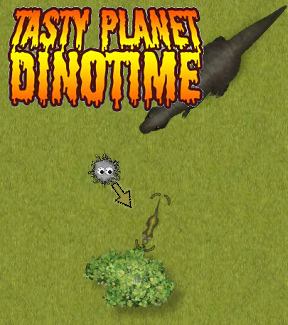 What time is it? Tasty Planet: DinoTime! Mathematical! The popular action series from Dingo Games is back, and this time things have gotten prehistoric. Like always, gameplay is one part Fishy and two parts Katamari as you take the starring role in the the cutest darn grey goo scenario the ancient world has ever seen. It's eat or be eaten as you grow from pebble-size to apatosaurus-size and, eventually, maybe big enough to do something about that huge asteroid in the sky. Those who've played the previous installments of the series should know what to expect: simple fun with a low challenge-level and some cute comic-book cut-scenes. Tasty Planet: DinoTime is short but enjoyable and worth playing to the clever end. Now get out there and eat ALL the dinos!

Bonus points for the description. Algebraic. :D More on-topic, like all the Tasty Planet games, this was fun to play. It felt a little like that brief dino-section you got in TP2, but I enjoyed the ending.

I found this game easier than the first one.. Until i found the "hard" button. Brilliant game, and a really good concept. you get shootemup's where you have to get a better gun, but i can't think of another game with the same idea. I'm about to go back and try and find out what happens if i dont eat the earth/eat the time machine? can you still pass the level i wonder?