What in tarnation is this thing?! Some sort of copper-headed rattle-water moccasin? Actually, Tarnation is a clever real-time strategy game by Brad Merritt that bears some resemblance to a tower defense title. You control a garden with rows of seeds ready to sprout into flowers that will dash off and dispatch incoming bugs. 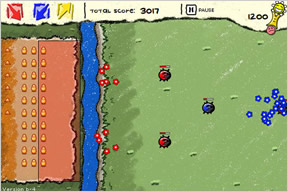 The bugs are made of Tar, you see, and if they reach the stream in front of your flower bed, they start to gunk up the water. Merely defeating all the bugs is enough to pass, but real excellence comes by releasing only as many flowers as you need. Its like a primer on sustainable gardening meets tower defense, with graphics reminiscent of Yoshi's Island.

There are three colors of bugs that can only be defeated by like-colored flower missiles. To turn seedlings into flowers, drag boxes across your garden. Depending on which corner you start and which direction you drag, a different color flower is made. For example, dragging from the top left to the bottom right unleashes red flowers, while top right to bottom left makes blue. Sprouts continually grow from left to right, so make sure you use seeds closest to the stream before they're pushed over the edge. 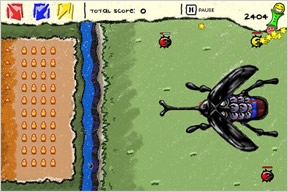 After the flowers are turned loose they attack like-colored bugs with a series of quick fly-bys. As long as there are bugs on the screen, the flowers keep attacking (though they eventually vanish), but when the bugs are gone the flowers disappear, too. The real strategy of this game comes from conserving your seeds as best you can while still preventing bugs from reaching the water. After all, there's not much of a garden to save if you don't have any seedlings!

Analysis: The angle of the flowers you create in relation to the bugs they attack determines how quickly the enemy is dispatched, which adds a nice element of spatial strategy to the mix. Also, "Close Call" kills made near the stream net big bonus points, though it's usually best not to plan for the last-ditch effort. Then there's the art of timing your releases so they finish the Tars just before another same-colored Tar enters the screen. Very rarely does a game achieve this level of depth and flexibility with a one button interface.

The only flaw in Tarnation that I could see is that your Skill Rating isn't immediately presented when you complete the level. When you try to click through the secondary statistics to see that prime value, it skips right to the next level. Other than that, this game is perfect, both in doing what it sets out to do with the poise of an Olympic gymnast, and for setting out to do something innovative.

We don't do ratings here, but if we did I'd give Tarnation five stars.

Yeah! I like good working simplifications of a genre. Thumbs up to this one.

great game, my only problem is that it's too short - could have used some more bosses and different enemy combinations plus perhaps some form of powerup or upgrade to really give the game the depth that it deserves.

This is Brad, the developer of Tarnation. I love this site so I cannot express in words how exciting it is to be featured and well received on Jayisgames. Thanks.

Very fun little game - I wish there was more of a warning the boss bug is about to advance, but it's not a big deal. I'm not sure I'd consider it a real time strategy game, in the conventional sense of the term, but it certainly is in real-time and certainly requires at least a modicum of strategy/guesstimation, and certainly is entertaining.

That's a neat litte game. It's nice to see something new!

Kudos on the control system - solid way to exploit existing skills that many (though perhaps surprisingly, not all) Mac & Windows users already understand. The drag-direction meanings quickly begin to feel natural after a couple of levels, though leaving the little gesture guide in the top-right was also a good move. I'd be interested to hear how the author chose to use this system; I feel like I've seen similar ones but can't remember where.

The theme is cute without being too cute and menacing without being too nasty, and the hand-drawn style works with it. I'm not sure how the poor bugs got so tarry and meanspirited (perhaps rescuing them could be fodder for a sequel), but let's face it, the world can probably use a little more ecological surrealism.

I'm not sure if the player choice of rectangle geometry has that much effect on flower effectiveness, especially because flowers last a fairly long time and their movement quickly becomes more random (which isn't a bad thing). I would have liked to see this angle better exploited, because there could be a natural tension between the way flowers fall off the patch (in a vertical line) and the optimal pattern for harvesting them (approximately horizontally). In the absence of that, I found selecting one or two seeds at a time to be an effective strategy, albeit a bit micromanaging (perhaps this is partly why Patrick felt the game resembles an RTS?).

On the downside, the difficulty ramp isn't really there yet - it's pretty much easy for the first ten levels, then considerably tougher for the last. The main game challenge, as noted in the between-level hints, lies in timing attacks to maximise reuse of flowers, and I didn't feel there was enough opportunity to get better at that. That said, I'm not sure what to recommend - maybe clearer feedback on how flowers age (the darkening effect is difficult to see when a swarm of them are in motion), and tuning of the game parameters - seed rate, flower strength and life, number and strength of bugs. Pacing the game a little quicker (more and weaker bugs, faster seed planting) would give more room for the difficulty to slide, and varying those parameters more between levels would help differentiate them.

The game is probably unplayable for someone who can't perceive the different colours, so more easily distinguished bugs (perhaps with features that evoke the three different gestures) would be a nice addition. And I couldn't help wishing that the fourth diagonal gesture had been used somehow - perhaps for the boss fight, or to pick up an occasional bonus?

As Imok notes, more warning that the mama bug is about to advance would help the player to better plan flower waves as the climax of the game approaches.

But in the final analysis, the game kept me engaged start to finish, and that's no mean feat. Thanks. ;)

(P.S. - one change I have to insist on is a way to turn off the music - independently of the sound effects - in-game. The loop fits the game well enough, but it's just too short, and as a rule giving the player this choice is a must for most any browser game.)

Great game! I'd love to see a multiplayer version of this :-)

I like the game, but I don't like the bonus for destroying bugs at the last second. Is my goal to protect the water, to be be a very bad tactician and let the bugs get as close to the water as possible?

I really think that this game should have an online multiplayer battle. It could be that after capturing a tar enemy, that spawn slightly slower, you can control them, while a computer comtrolled thing will try to defend the stream.

I like this game.I was on level 7 and then a advertisement came and messed up my game so I had to start over (but I didn't,not yet).I'm not playing right again because I'm kinda sad. :(

Being as late as possible is stylish. XD

I think this game is fantastic, though the last level is so hard and I am still stuck on it!! Can anyone help leave a tip for the last level?? Thought it's a great game, it can be frustrating when the mother just walks and dirty our water!!!!

Good article - For what it's worth if others require a 2012 TAR-2003 , my family came across a blank form here 2012 texas association of realtors residential lease application.