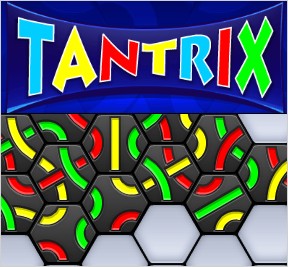 In 1988, Mike McManaway invented a board game using red and black cardboard tiles, which he called "The Mind Game." Since then, the board has been eliminated, the tiles have become more colorful and made of Bakelite, and the game now known as Tantrix has fully evolved. This online solitaire version is designed to introduce some of the basic strategies of Tantrix, a game that falls in the category of "simple to learn, yet difficult to master."

For the Discovery and Xtreme modes, there's only one simple rule to follow: All of the touching sides of your hexagonal tiles must match in color. Using this rule, your challenge is to create a loop of one color, using all of the given tiles. Each tile contains three segments of a colored path, which can twist and turn in many directions. In Discovery mode, you're told which color to use to make your path; in Xtreme mode, you must figure it out on your own. To move a tile, click and drag it to a location on the grid. To rotate a tile, click on it. Your goal is to make each loop in as little time as possible.

In Solitaire mode, your challenge is to shoot for a high score using all 14 tiles. While you're not required to form a complete loop of one color, the length of the longest chain of a single color determines your score, and forming a loop doubles the score of that chain. Thus, the highest score possible is 28 points. To play, click the "Next Tile" button on the right to get a randomly-selected tile. Place it on the board where you'd like, but remember that once the next tile is revealed, you can't change its location. In addition, one more rule is added to the mix: If there's an open area on the grid surrounded by three tiles, the first playable tile that fits must be played there. This can hurt your strategy, as it can keep you from playing a needed tile elsewhere on the board. If you think you've had a high-scoring run, you can submit the total of your last five games to a high scores board.

Analysis: This friendly solitaire version is an excellent introduction into the world of Tantrix. Although it might not have the renown of other board games like Scrabble, international tournaments are held annually for the multiplayer version of the game. With a 20-plus year history, Tantrix continues to attract new players.

One problem with this particular implementation is that the Discovery and Xtreme modes are in fact nearly identical. While the point is that one guides you gently by helping you decide which colors to match, and the other leaves you on your own, both introduce tiles in the same order. This follows the suggested rules of the physical version of the game, but doesn't translate well to digital.

The real gold is the Solitaire mode, which poses a unique challenge every time you play. The random selection of tiles almost feels like you're playing an opponent, since you can't determine how the game will change next. The tricky part is getting five high-scoring rounds in a row to submit to the high scores table. With persistence and planning, anything is possible.

If this mini-version of the game tickles your fancy, be sure to check out the official Tantrix website for more about the game and tournament information. If you want a "easy-yet-hard" puzzler to snack on, give Tantrix a shot.

Noo! Why does it have to be shockwave? :(

I love this kind of game, but can't run shockwave on Ubuntu.

By the way, this is a Shockwave game, so will probably only work in IE - it doesn't work in FF for one.

Found a way of getting it to work on Ubuntu... you'll need wine and ies4linux.

Running ies4linux will setup IE 6 under wine (you may need to have some extra dlls).

Running Tantrix from IE 6 then installs the Shockwave plugin, and the game has been working fine so far.

It's buggy on my mac, even after downloading the latest version of shockwave. :(

Music/sound effects are annoying as hell.

This looks good, and while I'd love to play it, I can't stand the noise and music and the controls to turn them off don't seem to work. Tried IE and FF on XP but still can't get rid of the sound.