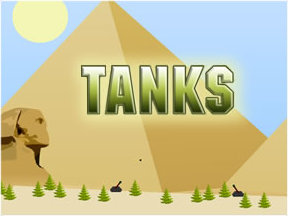 For all those interested in turn-based strategy games without all the complexity that usually goes with them, this one's for you.

Tanks features classic projectile gameplay in a Flash game package that ups the ante with tank, ammo and weapon upgrades, and even multiplayer action to boot.

The object of the game, of course, is to blow up your opponent(s). You can play against up to 4 other humans using the same computer, or against the computer. Each player takes a turn firing at an opponent by selecting cannon rotation, fire power, and even which weapon to fire. Following completion of a game, each player is awarded cash with which to buy weapons and upgrades, and this is where the real fun begins. =)

The up and down arrow keys control the cannon rotation, while the right and left arrow keys move your tank accordingly. Page up and Page down keys are used for controlling fire power. Press space to fire.

The interface for Tanks leaves much to be desired, and yet it is unnecessarily complex. The gameplay is actually quite simple and, if you can get past the interface, there is a fun little game lying in wait. Concentrate on learning how to aim and hit opponents first, then begin to explore all the options available to help get the job done. Click.

The game was developed by Khayam Ahmad, and is hosted on freeonlinegames.com. Be forewarned of the many ads you will receive when visiting that site.

hey this game is fun, but it needs a little more discription on the upgrades and what they do. like how can you have more than one shield?
good game though

Nick - I never played Scorched Earth, sorry. What about it reminds you of that game?

DB - I agree the interface is not the best. But discovery seems to be the redeeming quality in this game. As far as the shields go, maybe 2 shields protects you from twice as many hits? Just a guess.

you CANT have more than two sheilds!!!
A HINT: buy armor... its good buy HOT SHOWERS COS THEY PRETYTY MUCH BLOW THE WORLD UP!!!!!!!
did you know you can teleport after you fire????

Google for "Scorched Earth." This game looks very much like a straight Flash port of it.

It's a strange little early-90s freeware PC game which is, well, this, but in machine language to run acceptably on a 286 under DOS with CGA graphics and without the pretty scenic backgrounds, in which you and your opponent, controlling little pixelated tank silhouettes, try to blow one another up.

this is like the old game Pocket tanks. i have it downloaded on my computer. you can get it at http://www.pcgameworld.com/details.php/id/2507/
pocket tanks and this game are both AWESOME, but they both kinda get monotonous after awhile. there is a new version of pocket tanks with 60 weapons instead of 30 that you can buy for $15.00

muahahaha. i found a glitch. right after you fire, click teleport. wait until it is your opponent's turn to teleport, and you can teleport him! it counts as your turn though. if you do it just right, you can teleport him to where he shot so he hurts himself! if you do it too late when it is his turn, it will teleport you and your opponent will turn invisible, AAHHH!!! GHOST SHIP!! RUN FOR YOUR- *gets shot*

how do I activate my shields? I con only do it once at the very start of the game, but it is gone next round and I cant activate????

this game doesnt hold a candle to scorched earth, anyone that hasnt played it should go download it.

Not sure if its a spoiler but...

sometimes you will not die!!! if there is a decimal point to your power, unless you deactivate your parachute and fall, you will not die no matter how hard you hit urself!!!

I know this is old, but this game is SOOOO glitchy....

There's another link at http://www.mathsisfun.com/games/tanks.html , but it might be too late for that.

whoa, I played in a game where the wind speed reached 122 mph to the right. And for some reason, I, on the left, was the one who died 0.o

I can't believe nobody else noticed this but...

When Facing the computer, win with a Volcano bomb with of the ten you start with, and you will automatically get 99 volcano bombs! OWNAGE. As Far as I know it only works once a game, but it still rocks

Scorched Earth, if I recall correctly, had a setup period at the beginning of each round, so that everyone could choose what strength of shield, if any, to use for that round. It seems that since this game lacks that setup period, only the player who fires first can have a shield. I think that might be whoever's in last place, since I always seem to fire last when playing against the computer.

I was surprised to find out how right you were -- my power was between 0 and 1, I had no parachutes left, and I still survived a fall. Apparently I used a parachute, as afterward I had negative one parachutes! I then deactivated the parachutes myself and died on the next shot.

Were you on the left side of a mountain? Such a strong wind would probably have slammed your shot into the mountainside almost immediately, so that you were still in the blast radius.

I think that it doesn't have anything to do with winning -- that you actually start with a hundred volcano bombs, but it looks like ten because there isn't enough room in the display for three digits. Mr. Ahmad probably intended it to be ten, and didn't notice that he'd typed an extra zero.

i just found anoter glitch...not sure if i could redo it though

also...does anybody know how to use the upgrades?

If you meant upgrades as in more engine, better shields and stuff,they come automatically. with shields, you tke less damage, with engine you'll move faster, etc.

This game is a HOOT! If you've had a rough day, just drop a few bombs on the computer tank, and in no time you'll be smiling again!

This doesnt seem to have been answered...
How do I activate shields?

What does the "energy" upgrade do, exactly?