Tales of the Adventure Company

Tales of the Adventure Company is a casual RPG that works like a puzzle game. The tile-tapping exploration mechanic will be instantly familiar to anyone who's played Dungelot (or had an advent calendar), while the enemy grid formations will feel similar to the animal rescuing sections of Disco Zoo. Put it all together with quick combat sessions and a little bit of party-based strategy and you've got your next roguelike obsession! 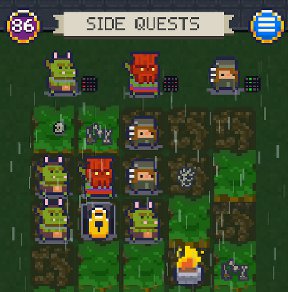 Each floor in Tales of the Adventure Company consists of a 5x5 grid of tiles. Enemies are hiding beneath the tiles, each one in its own arrangement as shown at the top of the screen. When you find a foe you can tap it to initiate a battle. There's also a hero that can join your party if you uncover his or her tiles, along with the occasional campsite to restore your health and maybe some other surprises, too!

Analysis: Tales of the Adventure Company has a layer of strategy sitting on top of its deceptively simple tile-tapping mechanic. Each party member has their own attack and health scores, but they also have an ability that's activated if you make them the leader of your party. The cleric heals your weakest party member with each move, for example. By swapping leaders you can maximize your tapping potential and keep your party in good shape for the wild battles to come. 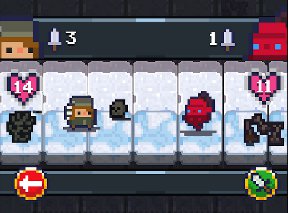 But wait, what's this? Enemies have abilities too?! Spiders and skeletons and all the rest aren't just going to sit and let you whack at them with your sword. When an enemy tile is on the screen, your party can suffer some negative effects, such as the ghost reducing hero attacks by one. This encourages you to prioritize certain enemies over others, creating a fascinating balance between exploration and party management.

Each move you make in Tales of the Adventure Company ticks away from the counter at the top of the screen. When you run out, it's game over. When you succeed, you unlock another episode filled with enemies to fight and tiles to uncover. Then you'll keep playing, because it's just that addictive.

Tales of the Adventure Company (Android)

Seems a bit buggy for me. Once I clear the first level and get the victory screen, it's stuck on the green screen and I can't get out of it. When I continue, it's all messed up and the turn counter reads XX.

I've had a similar issue, except in my case I run out of moves, I get a red screen, cannot move away. I reload the game, click 'continue' out of curiosity, get put back where I last was, no move, click on a tile and I just get the red screen again.

Agree with Haydn, a restart button would be nice so you don't have to refresh the website.

Also, is there any point to completing the quests (killing all of the enemies?) In my first play-through I was trying to kill all of them and I think all that ended up doing was wasting all my turns and hurting my heroes. I don't know why they'd call them quests if there is no point to doing it.

Or maybe I am mistaken about what the "Quests" at the top means. I thought it meant that killing each of the enemies shown was a quest. I now think it means nothing at all.

On another note I ran into a bug. I defeated the 2 Lich's on floor 7 and it showed a tombstone where one of my heroes was (even though he didn't die). Then when I uncovered a new hero it said my slots were full.

Even better, now I killed everyone on the 7th floor and nothing happened. I had 8 turns left and there was nothing else to do so I slept at the campsite. It restored my health and now there are -2 turns and I can't do anything.

This game is obviously far from release-ready.

How do I use Quests? Tutorial says click the top but nothing happens. Wat...

I reinstalled unity. No luck. This is unfortunate because the game is actually very neat for the small bit it works.

I find it really tedious that you have to click twice every time you want to make someone the leader (meaning, fight with that character) since this is obviously a primary part of the strategy. Ideally, you would just be able to click on him!I have to switch characters half a dozen times per level, at least!

Alas, no reset button, tis an amazing oversight. Not sure about "quests," but I played it a few times just to give it a try and I like the gentle blend of pattern logic and fighting strategy. A promising start.

On second thought, I believe "quests" are the same as the "achievements" referred to in the beginning of the game.

When viewing the description of an Episode they are indicated at the bottom with a picture of an adventurer or enemy, and the number you have uncovered. A star appears underneath it when you have found them all.

For example, in Episode I, the Quests are to find the indicated number of Priests, Rogues, and Skeleton. In Episode II, you must find Barbarians, Mages, and Pharoah.

1. You don't need to find the door before you find the key. It saves many turns to find the key first by strategically uncovering enemies one at a time using Archer.

2. You can back out of a fight mid-battle by using the back arrow icon (to heal using camp or Priest) and the monster retains the damage you dealt him.

3. You can switch characters mid-battle by pressing the character's icon. Deal the final blow using the Barbarian or the Mage, or kill a character intentionally (see below.)

4. When there is a desirable (fighting) character available, find the first two and wait until one character is almost dead. When he is dead, reveal the last square of the new character. Click on the grave icon to replace the dead character.

5. When revealing a new character or exploring a new floor for the first few clicks, it is best to use the Priest. After 4 or 5 moves you should be able to guess the pattern and use the Archer to deal damage to the enemies by uncovering them intentionally.