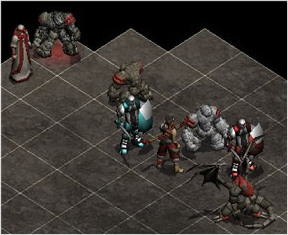 From Digital Seed Entertainment comes Tactics Arena Online (TAO), a turn based strategy game the likes of Final Fantasy. By commanding an army of characters on a battlefield, your goal is to decimate your opponents team in a battle of weapons and abilities.

Your team starts out in a formation that you plan out for them in the settings before the game begins. When the game starts, select which character to utilize. You have the options of attacking from your current position, moving it and then attacking, or moving it and wave your attack option. There's also the option to skip your turn entirely. Only one character is allowed to be moved per turn. The same character can only be used again after they've been through their turn recovery. For example, if a character has a five turn recovery, it cannot be used for 5 turns. A two turn recovery character can be used after 2 turns, etc...

Get to know your characters. Find out what they do, how they move, how strong their attacks are. From there you can learn how to setup your starting formation in a way that works best for you. Always try to keep the offensive in the game, never giving your opponent the chance to get the upper hand.

This game is beautifully drawn and animated, following in the footsteps of Final Fantasy and Warcraft. It plays much like a game of chess, in that you have to try to plan out your attacks ahead of time, and try to outwit your opponent.

Because this is an online game, you must setup an account. The account setup however is relatively painless. It asks you for a name and a password, and that's all. If you want to try the game by yourself first, and not battle against anybody online, the author has created a demo of the game called Tactics Core. It's the exact same as the online version except you don't get to choose your character setup, and they are all chosen at random. If you need more detailed instructions on how to play, there is a detailed online guide available to help you out. There is also a very active player community in the game forums.

If you enjoy games that challenge your intellect and ability to think ahead, then here's your game. Giving you the look and feel of a console game, but nicely packed into a casual flash game.

TAO also has the option to create a gold account with additional features, which is $5.00 USD a month.

you was a bit late posting this one werent you jay?

lol. Thanks, Chris. Yes, Labyrinth sent me the revised review several days ago (the first one I had sent back for editing =p). I should have posted it sooner, I know. My bad.

And thanks again, Labyrinth, for contributing to the site! =)

Wow, this takes me back. I'm interested in seeing if anybody remembers the original version of this, which was a single player game with 2D graphics. Oh, and this is a great game!

Old as the hills! I was going to get gold back when it was an all-time payment... I missed the boat by one day.

this game is easy and old wonder why it took so long for the game. lol

hehe juss trying dis out and use dragons alot ok

As always fun love this kind of game. As long its not mystery point and click i'm happy

The only pain is that if you're not playing at exactly the right time, you can't get the new characters, and without new stuff, you can't beat anyone that has it. Premium players get some extras right off the bat, which makes them nigh invincible.
Oh, and the Tactics Core has a totally different set of pieces and somewhat different gameplay, unless he's updated it recently.

hey i used to play this game ages ago, at that time it had at least half the amount of players it has now, 'Seed' the guy who made the game never really thought of the audience of the game much then, at that time he never thought that the game would become so big; anyways stopped playing because after asking him to put another character drop in the game he replied with an unprovoked rude sentence to me which i shall not write down and cut me off i couldnt log on for the rest of the day so i stopped playing since then, just posted this to warn u if u ever talk to him in the game:
He is not as kind and thoughtful as he likes people to think he is.
Karan

how do i buy new troops?

you don't buy troops..every now and then,right before you start a battle,it will say,"the winner of this battle will recieve a ____!"ya.

this game is quite good. for now the highest record i think is 2005. and that stats was by me the smiker boyz. i cheated to get that stat but seed banned me after like a few weeks my name was posted on the rankings.

how do u commit suicide with an assasin

i lost my mud gollem

i need help how do u talk 2 clane

how do you do special spells?

Is the server down or am I banned from the arena? I havent been able to get in since about 1-11-08.

I don't know, I play Legends and thje servers up just fine, but I don't know if the commercial servers are up or not.

@ walker : There are no "special spells" except for maybe the assassin kamikaze which requires the assassin to have very low hp...I believe it is below 5.
@ del : If your account was in the original seed server or "The Legends Server" which is what it is called, then you lost your account as a result of the server dying because seed stopped funding it. If your account was in a commercial server, then you were deleted after the 30 day trial period. Either way, it is unlikely you were banned if you were warned previously.