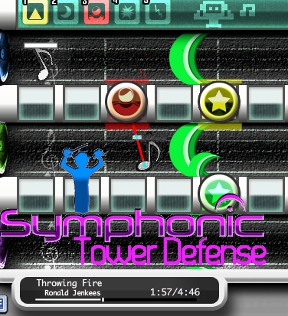 Tower Defense games have cast you in many different roles as protector: Soldier. Wizard. Monkey. Sunflower. I'm pretty sure though that Symphonic Tower Defense, the new music game by FrozenFire and Jon Sandness, is the first time that a band conductor (a balding one at that) has been tasked with guarding against a nigh-unstoppable attack. I suppose it's justified in this case, as it so happens that it is music itself that's out of control. Should the songs escape... terrible unspecified things will happen to us all. Get ready to take some notes and make your enemies treble with bass fear, as you orchestrate the sharpest defense possible!

Symphonic Tower Defense is based around notes traveling across three staffs to the beat of a song playing in the background. You must destroy the notes before they reach the other side of the screen, or else you lose a life. Each song has an "analysis" graphic that informs you which combination of five major aspects the song will focus on: Melody, Bass, Synth/Strings, Percussion, and Miscellaneous songs. Each one has a corresponding tower you can buy with a specific type of regular and special attacks. When the song focuses on that aspect, the regular attacks become more powerful and the special attacks charge quicker. Blasting notes gets you more cash, which can be used to buy/upgrade towers or power-ups like Sforzando Bombs, pausing Fermatas and Rests, slowing Decrescendos, and restarting Repeat Signs. There are nine songs in total, all available for download. And-a one, and-a two...

I don't think that there's any variety of casual game that couldn't be improved by the addition of a kicking soundtrack, and Symphonic Tower Defense is a case in point. Of course, what kinds of soundtracks you find to be kicking matter quite a great deal when it comes to music games. Symphonic Tower Defense leans quite heavily on electronic music, as, admittedly, many rhythm games do. Those who couldn't say what separates "trance" from "techno" might be turned away, especially since you must complete every song to unlock the next one, and some are a bit lengthy. Those who like the musical styling, however, will undoubtedly love the game (Two Words: Ronald Jenkees). Though without the songs, it would be a more than capable tower defense game, the addition is no mere gimmick. The developers have clearly taken the time to fully integrate music into the genre in ways that feel as natural as they are innovative. I was a little skeptical of the charts that specifically tell what the coming songs would focus on, but I can't deny you'll need every advantage you can get to triumph against the accurately named "Hard Mode". While a few hopefully-soon-to-be-fixed programming glitches make it a little discordant, overall Symphonic Tower Defense has a nice beat that's fun to dance to.

Hahaha I'm not very into tower defense games, but if a game uses fermatas and sforzandos as powerups? Sooo cool :D

The concept sounds cool, but the gameplay is pretty simplistic and the graphics look rather cheesy.

As a fan of music (esp. Trance) and Tower Defense games, I cannot give this enough thumbs up! :D And man, those last levels are *fast*. O_O

For some odd reason, the game doesn't work for me. At the title screen, there aren't any songs at all, and none of the buttons work apart from the "How to Play" button. The "How to Play" button opens up an instuctions section that cannot be closed. I am using Firefox 3.6 on a Windows XP. Could someone tell me whether this happens to them too?

[I'm not getting the same thing, but then I don't have the exact configuration you do (Windows 7, Firefox 6). There should be 2 songs unlocked to start with (bright green). First try emptying your browser cache and reload. It's possible you didn't get the whole file the first time it loaded and it's now corrupted. If that still doesn't work, try updating your Flash Player. -Jay]