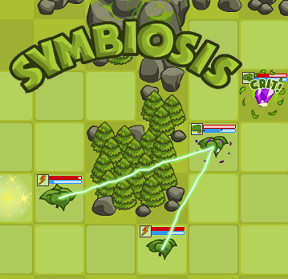 It will come as a surprise but aliens may not be as we imaged and there's a possibility our greatest salvation will come from none other than... plants? Before you scoff at the idea of Mother Earth being our best defense check out Symbiosis, a pleasant tower defense strategy game by The Gamest Studio that will prove to that dead fern that you do have a green thumb!

To fight off the cursed crystal aliens you will place plants on the map and decide whether the plant will grow, attack, or defend by clicking on the plant itself or using [A, S, D] keys. Close proximity to the enemy will allow your plant to attack faster and there are glowing spots on the map that double attack speed when you place a plant on it. To further assist your plants you have the ability to click and drag on one plant and place a symbiotic link to another. The bigger the distance between the two plants the better the benefits are for the receiving foliage. As an added bonus there are upgrades galore to make use of as well as spells that will help heal, harm, or protect.

As far as tower defense games go Symbiosis offers a wealth of upgrade options that will make the fifteen levels go by swiftly and flawlessly. The ability to adjust the difficulty the crystals will offer is a nifty gift that not only allows for better experience gain but also ensures you'll want to play even after beating all the levels. Even though the title of the game would imply that symbiosis would be an integral part of battle it's unfortunately not needed and after even getting halfway through the upgrades available most levels won't need more than two plants on the map to be victorious. Still, the gameplay itself is rewarding and has enough extra goodies to make it worth playing multiple times, especially if you like to complete achievements.

A bit too easy. Just play agressive and rush near enemy crystal selling plants you don't need, you'll finish every mission in under 1 minute.

How do you get silver and gold leafs?

@CrankTanker
I think its from defeating it with challenges turned on. When I put tier III challenges in everything I got gold

True, the main point of the game is to play 3 times, but it does fit the game:

If you realize that the 3 & 4 challenge achievements are do-able from the start you can easily get enough exp to finish the rest. I played for those each time. In the end you will have 3 stars left over and reach level 51 as a max for your level cap.

Just one question, once you win the game you get the gold Symbiosis? Does that automatically apply to your plants or do you need to do something?

I beat most of the challenge acheivements on the first try, then did a second play through do do the full challenge.

I never did figure out what golden symbiosis did.

Yes, you are absolutely right. Golden Symbiosis is just an auto powerup of regular symbiosis. So transferring energy from one plant to another becomes stronger.