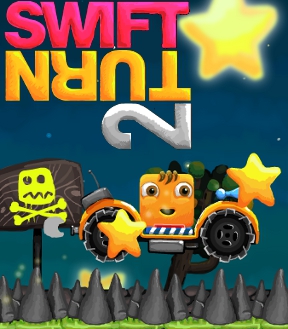 If I had control over gravity, I'd probably use it to steal the change out of everyone's pockets like some sort of villain from a Saturday morning cartoon. Just flip gravity near a vending machine, collect my ill-gotten gains and use them to construct a giant death ray. The boxy orange hero of Andriy Vinchkovskiy's physics puzzler Swift Turn 2, however, is out for stars instead of money so his gravity-defying plans might be a little less malicious.

Control the cubetagonist with the [arrow] or [WASD] keys, sometimes driving cars which control the same way. Your goal is to collect all the stars and then hit a goalpost, but naturally this isn't as easy as it might sound. There's a variety of mechanisms around each stage that do wacky things to physics; most common are levers that spin the world around and affect gravity along with it. You'll have to carefully manipulate each level's elements to grab all the stars and make your way to the goal.

Swift Turn 2's graphics are adorable, no getting around it. The protagonist and his expressions really make this game; he looks so frazzled when you fail a stage that how can you help but try again? The music and sound effects are great as well. The game feels very polished in general and looks much better than the original Swift Turn. The gameplay is pretty well-balanced and never becomes too difficult. While sometimes you'll fail levels due to physics wackiness such as a car falling on your character, this tends to be hilarious rather than frustrating.

Fans of physics puzzles could do a lot worse than Swift Turn 2. It dodges a lot of the frustration that puzzle games tend to run into which is a great breath of fresh air. It's enough fun that it might even make me forget to build that death ray... for now!