With great power, comes great responsibility. Most of the time. However, when a super hero is off the clock, and wants nothing more than to get back home and booze it up for the night, an alien space pig blasting their bottle of wine can really make him forget the words of his deceased uncle, or whatever. Suddenly, all the fragile civilians he spent the entire day protecting look so... flingable. And it's all for the greater good, y'know? Or, at least for the personal greater good of Supermuzhik. Supermuzhik (which the internet tells me roughly translates as "Super Strong Russian Peasant Guy") is an arcade-action sorta-shooter game by Aimar where the titular hero proves to be much better at "defeating evil" than "protecting the innocent." 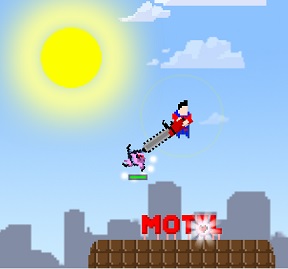 Use the [WASD] or [arrow keys] to fly around the screen. When the evil alien pigs inevitably attack, click on various citizenry to lift them with your telekinetic vision. Then, after aiming, click again to fling them at your foe. Some citizens are more resilient than others, and a few even have an extra attack or two to help you out. Defeating enemies and causing general mayhem releases both coins (that can be spent on upgrades, like the ability to fling pieces of scenery or unlocking a [spacebar]-charged laser) and various power-ups and weapons. Once you have a weapon in-hand, you can fire it by clicking. Should you want to drop it before running out of ammo, use [F]. There are three sets of five levels with a boss at the end of each. Supermuzhik is kind of a hot mess. The flinging and the fighting are all incredibly enjoyable on a visceral Attak kind of way, and the mechanics definitely make for a unique twist on the shooter genre. Still, while it just may be a personal level of skill, I found myself accidentally clicking outside the game window at a fairly constant rate, which felt less than ideal. Also, round about the time of the first boss, the difficulty takes a leap, so you had better keep buying those upgrades. Overall, though, Supermuzhik offers just as much gratuitous destruction than a Zack Snyder climactic fight scene, and might just end up being much more fun for its audience to boot.