Surprise! Bust-a-Move (or Puzzle Bobble, if you will) is creative and fresh and fun again! Super Awesome Hyper Dimensional Mega Team's Supermagical takes the familiar matching-based marble popping puzzle formula, quite literally turns it on its side, then adds a smattering of level-based progression, item upgrades, shops, mini-games, and even a hidden object diversion. The result is a colorful and charismatic game that feels like a brand new experience, no matter how familiar the gameplay might be. 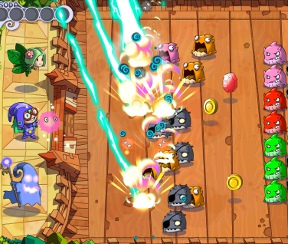 The Magic World has been invaded, but Nina the novice witch is ready to do her part to send everything evil back to the underworld. Sporting a fine pair of round spectacles, Nina steps forward to repel invading minix, the mindless color-coded foes that threaten to advance like no one has ever advanced before. Along the way she'll encounter her sisters, each quite diligently following the path of one of the seven deadly sins, and deal with them by cleverly answering questions. This witch is more than just a book of spells, you know.

Nina's abilities are rather limited at first, but she's very good at aiming and launching spare minix from her platform. Slide the gem to aim your shot, then release to fire. Just like Bust-a-Move, you can eliminate groups of like-colored minix, dropping "loose" pieces and watching as they get destroyed by almighty bursts of lightning. Complete a round and you're set free on the world map. From here you can access Nina's workshop, a tower with rooms for spell mixing, helper swapping and more. The shops are also found on the world map, varying their inventory depending on which spot you're standing. This means you've got to travel all over the place to find the items you need, adding a nice, adventurous sort of feeling to the game. And don't forget hunting for bags of gems hidden in the land surrounding each town! 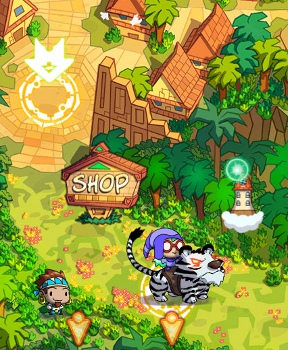 Matching minix isn't always a straightforward matter, as the grumpy little things will adopt different formations and send out things like unmatchable gray minix. As the game progresses, though, Nina gets a little better at using magic, allowing her to do more than just change the color of fired minix with pieces of candy. Some helpful friends show up with fantastic abilities that can be unleashed at the cost of a magic soda. With their help, you can eliminate whole rows and color groups, or just push back the enemy with the tap of the screen. You can even purchase ingredients and brew your own spells, which will take some time to do, but the results are so worth it.

Analysis: It might be a small point to raise, but for me, Supermagical feels like a game that came from the Game Boy Color era. That's a compliment of the highest order, mind you, as that device and that period in handheld history is home to some simple but wildly creative releases. Supermagical has that almost retro feel to it, but it's modern in almost every other respect, building around a basic concept and providing ample diversions from the main game.

Mini-games are a surprisingly fun part of Supermagical, and you're treated to one every few levels (more often if you buy tokens). The card matching game is simple but rewarding, and it will remind more than one gamer of the card game found in Super Mario Bros. 3. Defeating bosses is also a mini-game of sorts, as you have to answer questions correctly or deal with a minix attack. Oh, and then there's the piñatas. Every game should have breakable piñata items!

Here's what you should take away about Supermagical: it's got a lot of things going for it, and very few (if any) drawbacks. Gameplay that will appeal to a wide audience, a crazy sort of story with witches and magic and blobby things, mini-games and bags of coins to find, it's just a good game to get your hands on right away!

I suppose I'm the only person who first read the title in the top picture as "Spermicidal" - Now THAT would be a truly novel game idea!

This game is made of awesome! Helpful hint: do not bring your iPhone to work with this game loaded, you will not get anything done.

Sharon Lovejoy, I agree! Spermicidal was the first thing I saw too! Hilarious.

This is driving me absolutely batty, but does anyone know which village/station store the Sapphire Key can be purchased at?

I swear I've clicked through every level three times...