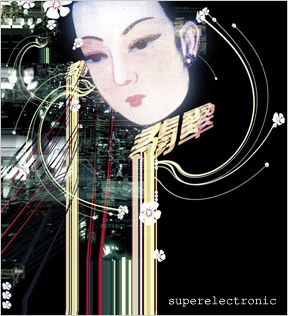 Superelectronic is an interactive art piece by Aoineko, a group of award-winning Web artists specializing in audiovisual aesthetics. It was completed over the course of about five months in 2002, and it received worldwide recognition during Canon's Digital Creator's Contest as well as Rockstar Games' Upload competition.

The piece blends various styles together to achieve something unique, an amalgamation of interactive multimedia. The result is a stunning work of art that is wonderful and inspirational. A creative cornucopia of sensory delights.

The title, Superelectronic, is a reference to electricity being the nature of life, as well as man's attempt to recreate himself through electrical devices. A representation of the cyclical nature of life, emotions and the universe itself.

Cheers to Mike for suggesting this one! =)

Wow, that was a super cool game.
P.S.Long time visitor, first time poster. Your site rocks Jay, the daily updates are what keep me coming here every time I get to use the computer =) Keep up the great work!

That was rather interesting. Nice find, Mike :)

Maybe I'm just not finding it, but is there anything beyond the third page?

The page with the fish.

Caya: the 3d cartoonish figures at the bottom somewhere in the middle

I love the part that says: Watermelon Hypertensile Reinvigoration. I hope I can found out which artist is responsible for that.

still I can't find where to click on the page with the fish..
: (

You probably want to scroll down, the movie is way too big to fit in my browser-window at least.

hmmm... maybe it's just me but I do not get it. First of all, I couldn't get passed the page with the fish (I couldn't scroll the screen to whatever animation thingy there was in the middle on the bottom)..and when I right clicked on adobe flash player to move forward, it turned into this strange Japanese animated game with talking baby flowers and clouds saying "I think I'm going to rain today.." (?!)

I hate to leave a negative comment but this perticular game was just flat out strange... not really a game at all! :(

moseywo - I don't what gave you the impression superelectronic is a game. From the first sentence of my 'review':

You're right Jay.. my bad!! This art piece is obviously too sophisticated for me to comprehend but maybe I'd change my mind if I could fully enjoy it. I had problems getting passed the 3rd screen for me. I couldn't scroll to make the screen bigger or anything :(

There's another piece here, from their old page:here.
There's also music of the band. It's nice.

The scrolling is bad design imo, not everyone has scrollwheel is it? And if I don't mistake mac-version of flashplayer didn't support scrollwheel at the time this movie was made.

This is gorgeous! The music fits perfectly, and the images are spectacular!

Thanks for the heads up wouter!!! That was really cool!

It was cool. The animation is very similar to what can be found at:

Screen 1 ("My Brain, My Spine.."): Anywhere on the drawn section

Screen 2 ("Artificial Cells in Arrays.."): On that text

Screen 3 ("A Candle that Darkens"): On that text

Screen 4 ("Summer Turns to Autumn"): On the flashing cartoon character in the bottom right corner, under the words "Pterophyllum Scalare"

Screen 5 (Neon lights): On the largest, rightmost butterfly (that shows text when you mouse over it)

Screen 6 (The cloud): Anywhere on it.

Screen 8 (Weird "flash game" part 2): on the cloud that says "I'm going to rain today" when moused over.

Screen 10 (Work): You can mouse over the character at the desk on the maximum right. Click "Drive Smartly"

Screen 11 (Corruption): On the area near to the red square.

This is definitely art. But an ATM is much more interactive than this. To my mind, the interactor's decisions should make material differences in their experience. For Superelectronic, except for a few mouseovers and the flashing picture set that paused when you moused over, there was nothing that changed from user interaction. It's basically a beautiful slideshow that makes you hunt for the "next" button.

Arguably, there are some games, like Wogger, that are only a step above. They have some dead-end possibilities, but for the most part, you just have to find the "next" button. The programmer railroads the player along.

Interactivity of the kind I'm describing has a few problems, because there are only a few ways to go about it that we've found so far. The kinds below are more related to art/fiction/games with storylines:

1. A big branching tree of choices (e.g. Choose-Your-Own-Adventure books). The problem with this is you have to develop a bunch of material, and unless it's all so good that the user patiently replays and replays to see all of the branches, that's a lot of wasted effort.

2. A branching tree that collapses some or all of the choices together toward the end. Less material needed, but it basically means the user's decisions didn't actually change things. I suppose you could make a cool game/art/fiction about fate or paradox-correcting time travel.

3. A story spine with side quests (e.g. most RPGs). Again, the user loses most of the feeling that their decisions actually changed something and that they had much choice in the matter.

4. A sandbox (e.g. The Sims). This is all interactivity, but no story/goal except the ones you impose on it. It's almost impossible to do a story humans will like this way because computers aren't very good at imposing "stories" on characters and elements, no matter how many details we program for each of the elements.

One method that has been proposed is related to object-oriented programming. You develop graphics for a bunch of settings and characters and events. And then the user controls one or more of the characters, and the computer sees to it that certain events happen to keep the story contained. The Eyemaze GROW games go a little bit in this direction, in that if the right elements are placed together at the right time, they interact and develop. If not, not.

The main character could walk through town interacting with people in environments, and the information and objects they give him will change future interactions. For example, if you meet your friend just as he leaves the coffee shop and discovers they put cream in his chai, he might offer it to you. But if you meet him later, he'll have already thrown it away. But if you have the chai, when you get bumped into later, you'll get it all over yourself and the other guy, and it might cause a fight rather than just a curt apology. And there may be dozens of other interactions that will make you fail or succeed at your interview later in the day.

All these characters, locations, and objects have already been created (I'm thinking of a 3D modeled environment), and the game can make sure that if you don't meet your friend at the coffee shop, you will still run into him later so he can warn you about the rabid gerbils escaped from the pet shop (but you won't get any chai out of it).

The major grand finales can play out in a bunch of different places, with subtle variations. For example, you might land the job, but can't prevent the gerbils from overrunning the whole town, and make your last stand in your cubicle with the hairspray from the salon and the matchbook from the tavern. But if you can make it to the abandoned gas station, you can use the same matchbook to sacrifice yourself and blow up all the gerbils. No matchbook, then you just get nibbled to death, and there's a hissing noise when they gnaw through the hairspray can.

Theoretically, this means you're not developing a bunch of different cut scenes, most of which won't get used, and you're also not railroading the player though a series of cutscene in order. Through the smart interactions, dialogue, and a few extra touches, there's still a strong sense of story to most of the interactions and endings, which are appropriately touching, ironic, etc. based on player leading up to then. It should be impossible to have exactly the same game twice, though the player will recognize the major ending types after several plays.

Some might argue that writing dialogue and variances in the interactions for all the major combinations of objects, locations, and characters is too much work, but these should take much less of a development budget, and still get a lot of mileage with the player, if they are done cleverly. This would also allow some elements of the game to be seeded randomly (or have unlockable events, objects, etc.), and the player would have to overcome the odds.

Thanks for posting my recommedation, Jay, and thanks for the links to the other aoineko pieces, wouter. I hunted this down again after re-watching Blade Runner last week. I think it has a similar appeal, like a cyberpunk novel in Flash form.

I see a lot of comments about having to scroll to see everything. Try switching to fullscreen. Scrolling doesn't seem to work at all for me (I wonder if it's a Linux issue), and it wasn't until I zoomed in and moved around manually that I even realized there was text at the bottom of the second screen.

Wow, this was really good. I remember a while a go, I saw something similar, under the whole "Click around while not really playing" genre. Not as good as this one though. I loved some of the earlier screens, including the fish one. If there were more websites like this, I'd be a very happy person.

if you wait a really long time on the screen that shows a boy playing soccer with a dog, the dog will hit the ball into the sky and the boy will turn into his super form, bring the ball back and play soccer with the dog at the speed of sound and the boy will miss the ball and turn back to normal.XD

Ghost in the shell was the first thing I thought of when I looked at this!