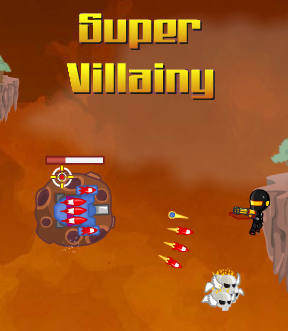 Super Villainy, a sci-fi arena shooter by Rob Almighty, offers a solution to the question that has stumped comic book readers for generations: When the various arch-nemeses dotting the globe finally get their act together and follow through on their threats of global thermonuclear destruction, what exactly is step two of the plan? Answer: Have a solar-system spanning battle royale to determine once and for all, who is the baddest of the bad. So bring out your henchmen, your death-bots, your demonic skulls, your... aggressive flying toasters? Whatever. Only one can remain to maniacally laugh over the bodies of their fallen foes.

In Super Villainy, you move across the space-scape with [WASD] and aim your constantly firing weapon with the mouse. Holding the mouse button down will enter a bullet-time state that makes avoiding enemies easier. [Spacebar] will release a special attack in all directions. Blasted enemies will drop coins that can be used to purchase upgrades between rounds, as well as to hire minions to fight along your side. Each level has different challenges, and lead up to a boss fight with your four rivals. So, good luck at being bad!

Super Villainy is a solid arena shooter with a few features that differentiate it from the pack. It seems to have a lot more freedom it its gameplay than is typical for the genre. Part of that may come from how the setting is the wide void of space rather than a cramped colliseum, but adding in that little bit of non-linearity where you can decide what order you take on your rivals counts for a lot. Super Villainy is just long and just complex enough to be satisfying, without wearing out its welcome. So try it out! Also... KNEEL! KNEEL BEFORE THE MIGHT OF DR. PUNCHYBLOOD!

Three things I can't do in my life:

3) Simultaneously move with WASD keys and aim with a mouse.

I think it's because I've spent too much time playing RPGs and not enough (if any) playing FPSs.

You have to use two different hands. <g>

Yeah, I haven't seen flying toasters since the early 1990s.

I know I'm holding out for a "You Bet Your Head" comeback.