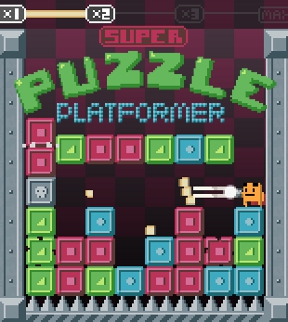 Andrew Morrish must have it in for you. I mean, he's clearly trying to get you in trouble with your boss, since his new action arcade platformer game, Super Puzzle Platformer, is way too addictive. How are you possibly going to calculate all those complex, disease-curing mathematical and chemical formulas (I like to imagine all of you are super geniuses) when you know you could be running, leaping, and blasting your way through a never-ending downpour of Tetris-like blocks instead? Any other work seems boring by comparison, even if you are out wrestling bulligers (that's a bull with a tiger's jaws) to save orphanages that are also on fire. (I also like to imagine all of you are super heroic and dreamy. You don't mind, do you?)

Controls are easy; just use the [arrow] keys to run and jump, and [Z] or [X] or [spacebar] to shoot. Coloured blocks fall randomly from the top of the screen and begin to mount up quickly; blasting one block causes all the adjacent blocks of the same colour to be destroyed, which not only keeps things from approaching critical mass, but also causes little pellets to drop that will count towards upgrading the damage your gun does, but watch out; if you get trapped underneath a falling block, your power will get knocked back down. Keep moving and shooting, but steer clear of spikes... from below and above, since a single hit will end the game. Periodically, you'll get a number of spiked blocks that can't be destroyed individually and need to be eradicated as part of a chain of coloured blocks. If things get too frantic, hit the [ESC] button to pause. Of course, you're only prolonging the inevitable... you will fail eventually, it's just a matter of how big your score is when it happens.

While there isn't a whole lot to Super Puzzle Platformer's gameplay, there's just something about it that makes it immensely fun to play. From the colourful, simple visuals to the relentlessly bouncy soundtrack by Landon Podbielski it's a bright, energetic package that makes it a joy to play over and over. While it may look easy, a bit of strategy is definitely necessary to achieve the 1337est of scores, and the rapidly escalating speed forces you to think on your feet. There are, of course, a few issues; the lack of variety keeps it from really achieving instant classic status, and the controls occasionally feel almost too responsive. Fortunately, for those of us who have been craving something that's just simple, fast-paced arcade fun, Super Puzzle Platformer serves it up piping hot and all tasty-like. Give it a play or four... if you have time in your busy schedule of rehabilitating orphaned orangutan babies, of course. (Seriously, you guys are so awesome!)

Such a very simple idea that's executed exquisitely, the addictive quality is many times greater than its size.

One of the best little Flash games I've played in a long while, and one I keep coming back to play again and again. :)

Only local highscores? That's ... kinda BS. Oh well. May come back to it again later.

Fun little game but it could be so much better! The getting pushed backwards as you shoot seems unneccessary and there could be a less steep curve on death-dealing spikes from above to make game-play last longer (and thus game enjoyability). Great idea, though!

It's a fun game, but it'd be nice to have more than one life. Maybe multiple stages, different obstacles.

Anyone who dislikes this game officially needs to get off this site and go outside.

Whhaaaa how did nobody think of this idea...?

Superb game, but it makes me feel dumb for not realising how awesome it would be and making it myself.

Man, this game is fun. Too bad it gets awfully laggy once you get to the third powerup or so. But I managed to play in slow motion to 59645 points, personal best!
Kinda disturbs me that there are so many zeros in the score bar, though. Anyone have a score in the billions?