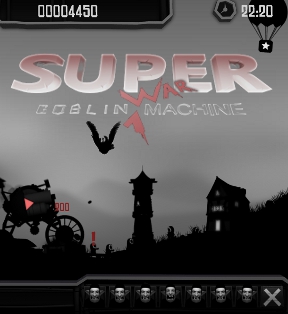 Well, you had to go and do it, didn't you? You stinky humans had to keep stealing goblin inventions, snubbing the romantic advances of goblin queens, and generally looking down on them. Now they're mad... really mad... and really, really armed, with a huge, configurable machine designed to rampage through human towns and armies and show you just who the puny ones really are! But it's not too late for you, and if you're willing to help out, the goblins might just forgive you. So score one for the little guy in Super Goblin War Machine, a action shooter with physics from Big Block Games that improves on the original in almost every possible way with more weapons, more carnage, more areas, and most importantly... more flaming cows!

Control is still relatively simple; use the [WASD] or [arrow] keys to move around, hold [shift] to get a boost of speed, and the mouse to aim and shoot. The goal is to wipe out as many humans as you can on each level, causing as much destruction as is humanly, sorry, gobliny possible, and make it to the end without losing all of your goblins located at the bottom of the screen. You might think a giant rolling death construct is impenetrable, but even tiny human soldiers can be trouble if they appear in big enough numbers... to say nothing of giant eagles, cannons, bombs, defensive towers, and much more, of course. If you need to, hit [R] to immediately restart a level, or [ESC] to bounce back to the main menu.

As you unlock more areas of the map, you'll also gain access to different shops that sell different things, but keep your eyes peeled for floating packages on certain stages; if you can shoot them down before they float away, you'll get one of these sweet items for free! After buying an item, you'll be able to configure your war machine to your liking; experiment with different parts and combinations until you find what best suits the stages you're trying to conquer. Big heavy main things, for example, are only a good idea if you aren't trying to roll approximately five tons of rock and steel across a rickety peasant bridge over a chasm.

Special Notice for Friday June 6th 2011: While the Dwarven Campaign normally costs 4.99, as a special promotion this weekend only, our readers who follow this link will gain access to the full game free of charge! (You need to register a free account with their site to do so.) Special thanks to Big Block Games for this great gift to our audience. 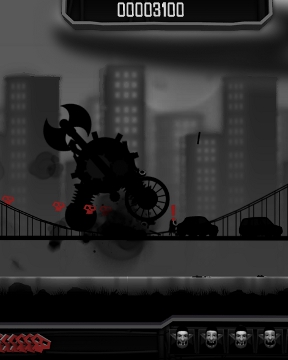 Analysis: Compared to the original, Super Goblin War Machine feels like it moves a lot faster, with levels generally being packed full with a lot more squishy humans, helpless cows, fragile structures and more so that you actually feel like you're going on a genuine rampage. There's just so much to destroy and so much happening onscreen that it's almost a disappointment when the levels end so quickly; the first time you cause an enemy bomb to explode and cause panicked cows and nearby civilians to burst into flames, I defy you not to cackle maliciously. It also doesn't feel quite as easy (or fated) to flip yourself over like a turtle on even the bumpiest terrain; it'll still happen occasionally, but without the depressing frequency of the first game, and it seems to be a lot easier to right yourself when it does.

But what's really new? Well, for one, you'll be able to play various optional minigames like Boulder Bowling or Crowning Distance to unlock new items for use on your war machine. You'll need to attain a high enough score on certain levels to actually partake in these activities, but some of the items you can win are entertaining enough that you might want to make the effort. Big axe thing? Fiery rock thrower? I am so there! Furthermore, while the first batch of towns might not offer much new to players of the original, the farther you play, the more challenging and tricky the game becomes, with harder terrain and deadlier enemies... look, I don't care what sort of magical fantasy creature you are, a cannon blast to the face is still bad news, so just be careful, okay? Your dad is going to kill you if you put the war machine back in the garage all dinged up again.

Super Goblin War Machine is a fantastic improvement over the original, while keeping everything that made the original awesome intact. The silly text that bookends each level, the beautiful shadowed aesthetics and animation, all of it blends together to make a beautifully destructive experience that the budding (gender neutral!) Dark Lord in all of us will appreciate. So strap yourself into the main thing with your goblin entourage, make ready the weapon of your choice, and get ready to cause some property damage. Hey... you deserve it!

I'd be grateful if anyone could tell me how you're supposed to get past collapsing bridges. Doesn't seem possible no matter what your reflexes are like, given that the WM jumps, like, half a millimeter at best...

I was enjoying it up to suddenly not being able to get past any new towns, as they all have the bridges by a certain point.

sorry but i just hate games that want you to pay for extras and that don't end unless you pay.. such a waste :/

I never played original, so everything was new to me, but - awesome game! I liked addictive game-play, funny text, lots of unlockables, graphic..
Only hiccup I noticed is when there's huge amount of explosions game freezes for a few seconds, but it's probably flash-vs.-my hardware thing.
The best moment was when I noticed a "graphical feature" -

Also, for "old-timers", the whole game has a sensation of inverse Choplifter

You know the game is free this weekend RafaDL, just use the offer and get it for free, easy.

How do you get the avalanche achievement?

@RafaDL I challaenge you to make a game I'd like to play. I also challenge you to waste months of your life doing so just so I can have fun.

Even indie devs like a tiny bit of cash my friend. It keeps the wheels well greased and rolling.

Give a little credit were credit is due. The thing is fun.

Probably should also add a tag that says iPad as its free on iPad today.

Not sure how much better the iPad version is as I still turtle often. Maybe I just need practice.

Actually, theres a bug in the iPad version where bout equipment have the same stats as your starting equipment.

Could a mod fix the typo in my above post please? I know its a double post, but theres no edit button.

How do you upgrade the machine? Can't find anything to click that opens up the upgrades.

To upgrade it, keep playing. Some of the levels you unlock are shops, you buy upgrades there. Might wanna get the free version now. And how do you get that avalanche achievement?

I just discovered how to get that "Avalanche" badge. Here's a hint:

Play the Motsognir's Kitchen stage. Look at the ceiling near the first batch of enemies...

Is there a way to erase progress? I wish to redo the old campaign, but find the map to be a mass of bronze and silver medals (and a gold one).

Got gold across the board and all achievements.

It's almost too easy I hate to say, especially when you can really upgrade your machine.