There's old school, and then there's old school, and the original Battle City, which came out in 1985, definitely qualifies as the latter. It was one of the earliest games to offer simultaneous two-player play, and that was back in the day when someone had to be in the same room with you to take part, so you could employ such classic Sun Tzu techniques as "unplugging their controller" or "shoving them violently off the couch" in order to win. Super Battle City is a more modern spin on that classic action game, packed with upgrades, achievements, and of course all the explosive barrels and crates you could desire. Using either [WASD] or the [arrow] keys to move your tank, and the mouse to aim and shoot, you need to complete each level's objective while staying alive while enemy tanks and turrets crawl all over the map trying to fill you full of... whatever tank ammunition is traditionally made of. Often you'll need to defend your base from enemy fire, and while you'll just respawn if you're destroyed as long as you have lives left, if your base is taken out, it's game over. While a lot of things in your environment are not only destructible but filled with coins to spend on upgrades, you might not want to just start blasting away willy-nilly, since a lot of that terrain can be all that stands between you and total decimation by greater enemy numbers. Power-ups can be found to temporarily boost or shield you, and if you capture a turret by sticking close to it long enough (something enemies can do as well!), it'll blast anything that comes within range. 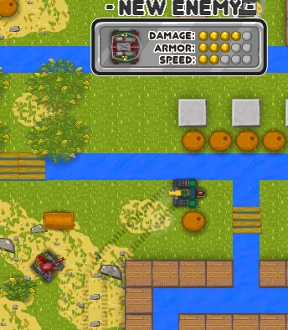 Even ignoring that retro-tastic soundtrack, Super Battle City feels like a very classic arcade action game in the way that it plays. It's chaotic, it's frantic, it's full of explosives and bullets, and the odds are always against you. It's not uncommon to be dealing with a procession of dozens of enemies while you're under heavy fire desperately trying to capture a turret also methodically plugging away at you. This isn't quite as challenging as it might be, however, since enemy AI is... generous. You often have a greater range than most enemy tanks do, so it's easy to fire on them while backing away as they struggle to catch up, and tight corners and corridors tend to confuse them, making them pile up like excitable, stupid, heavily armored puppies at times. The game is at its most fun when the stage is crawling with enemies with more open and destructible terrain, sending you scrambling for cover, sneaking to activate turrets, and diving on upgrades that will send in temporary reinforcements. Though slow to add variety, the game has a ton of levels, with each mission comprised of twelve different stages, not including the bonuses, survival stages, or timed attacks, and the challenge quickly ramps up when more and more enemy types are introduced. Fans of classic arcade action will find a lot to love here in this beefy game, and Super Battle City is one impressive piece of work that's clearly been made with love as well.