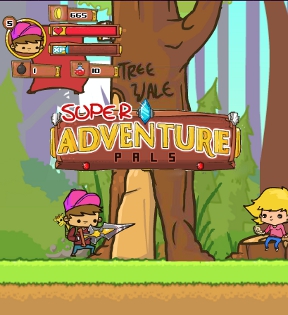 Is there anything more adorable than a boy and his tiger? Well, how about a boy and his giraffe? There used to be a pet rock in there too, but the jealous Mr B has stonenapped him, so now it's up to you and your trusty reticulated steed to get him back! Jay Armstong's quirky, bouncy platforming adventure Super Adventure Pals combines sword-swinging and RPG elements with a heavy dose of cuteness and absurdity for a weird and wacky title that's good and good for ya despite a few bumps in the road.

Super Adventure Pals has two control options for you to choose from in the form of [WASD] for movement and the [arrow] keys to perform actions, or vice-versa. In your quest to save your rockin' pal, you'll have to travel around the land defeating enemies and hunting down quest items for yourself or the hapless villagers you meet. As you defeat enemies, you'll earn experience points, and eventually level up which will allow you to upgrade either your strength or your health. Health, as you might expect, is kind of important since none of the baddies seem to care that you're a little kid and will happily pound the snot out of you, but as long as you're carrying potions they'll automatically be used when your health drops below a certain point. Use the gold you'll find strewn around to buy more potions, or bombs that you can hurl at enemies, and replay stages to earn diamonds that can be spent on more useful magical items.

No two shakes about it, Super Adventure Pals feels like it's expressly made to make you smile, from the goofy story and dialogue to the giggle-inducing character designs and bouncy soundtrack. The quests you'll undertake are all simple fetch-quests for the most part, but it feels like anything else would get in the way of the simplified approach to the RPG elements that makes it so much fun to hop right into. Super Adventure Pals's greatest flaw, however, will be the lack of customiseable controls. Neither option's choice of action keys feel particularly intuitive and will take some practice to get used to, and it seems like allowing players to rebind keys to what they're comfortable with would cut out the frustration some are going to feel that's going to hurt the experience for them. As a result, as simple in concept as the combat is, it's going to require a bit of finesse and practice to keep from getting backhanded off platforms. Super Adventure Pals is well worth playing through if you have the patience to wrangle the controls, and provides more than enough grins and cheers along the way.

I'm really enjoying this game but there's this terrible glitch on the world map that will randomly port you to the middle of no where, forcing you to refresh the page XP

After I got the damage upgrades maxed out, I started putting my increases into health, but the bar never advanced. Also, I alloted a point to damage after the gauge for that was full. It let me do this, but I'm pretty sure the point just went to waste.

This is a really fun, beautifully designed game. But was anyone else annoyed by glitches? I found when the screen got too busy the 'jump' key was pretty hit and miss, resulting in a lot of swearing and keyboard abuse...

Turning the quality down helped alot

Good -- it's not just me swearing at controls that flake out from time to time.

I fell through more than a few platforms, and made a suicide dive when I know I'd pressed the jump key in plenty of time.

I'd sure appreciate some sort of hint about the final boss stage, though -- that one is unlike any other level, and thus far I've died before I've even figured out where the character is on the screen, let alone what to do with him.

and after a couple of days of dropping back in to try to beat the final boss?

Hurray -- a glitch that leaves you standing at the entrance to the final stage, and panting....but unable to do anything else -- no menu screen option, and frozen controls.

The final stage turns this game from a fun little romp to an aggravating exercise in futility that strips all the fun out of the game.

I agree with all the comments.
It's a great concept ruined by finicky controls and glitches.

On another note, does anyone know how to help the penguins adopt a child?

About the penguin adoption:

There's a person in Treevale that (after you've completed the level he sends you to) tells you that he is an orphan.

Leave again, if you want, go back to Treevale to make sure that the orphan isn't there anymore.
Returning to the Penguins again will complete the quest.

Do you mean the bully that you then find out is insecure?

Is there some secret to getting the find one million dollars achievement, or is it one of those you'll have to play for 100 hours just to collect it all?

@ inheritance.fan: I think "ruined" is going a bit far... It seemed fun enough to me despite the problems mentioned thus far.

@ Ryan: There are no easy ways to accomplish it but it is doable with a few tricks such as

selling diamonds that you get for completing levels after you have beaten them the first time (for 500 coins each) and buying some of the upgrades at the shops.

It will still take a long time, though.

HEY! This game was super cute and random... but sometimes very frustrating, but I got through it!
I found it funny how even the bad guys/monsters were adorable too! Except for those blue thingys and the creepy cactuses. lol.
And I ~finally~ got the ending/final showdown :) Here you go;

So when it starts you totally freak out with all the lasers and what not, right? Well see all those blocks you can jump on(and the help of those circle thingys?), all you have to do is keep jumping up up up, avoid the lasers... and then~~

...you will end up fighting just the guy one on one instead! Very easy like all the other "bosses". Just throw bombs and use your sword, you'll win in like 5 seconds

This is how you Redeem Yourself to the Sheriff:

I liked this game a lot and so far hadn't too much trouble with the controls. Has anyone managed, though, to have a completion percentage of 100? I have finished every single level with A grades and earned every medal except the 1 million coins medal (as Echoloco said: that's going to take loooooong) and yet have only 94% completion. Thanks for sharing your experience.

At first I really enjoyed this game but it wore itself out pretty quickly. I found the artwork a little gross at times in a Ren & Stimpy kind of way (nothing wrong with that but it was not what I wanted to see in a game.)

The controls were pretty awful but at least there was no mouse/keyboard intermingling (which ruins a lot of good games.) I remember one jumping sequence in particular in which I died about 25 times in the attempt because of lousy controls (and some pilot error I'm sure.)

All in all I suppose it is worth playing only because it was not overly long. It was really just the right length. I felt it was getting to be too much towards the beginning of World 3 and then blessedly it ended.

Here are some tips for frustrated players:

BUY THE COIN MAGNET FIRST it will make your life magically easier. Play two easy levels in the first world over again right away and buy the magnet.

Pretty much you can take this as far as you want to. The second boss level rewards you with 400 coins each time you play (after the initial ruby-garnering win.) Just hold down the A key to fire and close your eyes. As long long as you are in the middle of the screen the robot will not hit you and will often be dead before even throwing his first punch. Don't worry about the bullets, they barely scratch you. I have never died in this battle. Make about 4,000 gold, trade for Diamonds, and buy all the upgrades.

Not by a long shot. At first I worried about using bombs excessively then found it sped up the game considerably, especially once you are in the desert. Since you should be rolling in gold most of the time just keep many bombs (& potions) on hand. (The lucky clover helps with this too.)

While initially so frustrating I momentarily decided to call it quits, feeling the ending would not be worth it, I found that this level is deceptively easy. Notice that the meter in the corner starts at the bottom and rises to the top, and is therefore not a health meter but an indication of how long you have avoided the robot. You just have to keep scaling faster than he is shooting. Don't worry too much if he hits you, just don't get knocked off the edge. I basically just started hitting the up arrow as fast as I could and haphazardly piloted my way back and forth with the arrow keys and I made it to the top. Then hit the Rock Thief as much as you can until he is defeated, doesn't take too long. Have a couple potions on hand to revive you.