Failbetter Games' Fallen London is best described as Welcome to Night Vale meets alternate-history Victorian-Gothic, a strange combination of horrifying, hilarious, and mysterious that takes players on a bizarre tour through a dangerous and strange world where London exists underground (it was stolen by bats... long story), and with that comes a host of surreal creatures, characters, and customs, where whispers and secrets can be currency, and playwrights make pacts with demons. Sunless Sea, set in the same world, is the team's first commercial product, and one that expands on the beloved series mythology by placing you in command of a vessel on that vast subterranean sea, the Unterzee, where new cities, cultures, monsters and more lurk across the dark depths. Part choose-your-own-adventure style text story, simulation, part nautical RPG and player-driven narrative, you'll craft a character, decide their background, and give them an ambition... maybe you'll want to write the next great masterpiece, or find your father's bones. It's all up to you, and a vast world filled with intrigue, wonders, and horrors awaits you, but be warned... the zee is a dangerous place, and anything can happen. Sailing darkened waters and encountering strange events can increase your crew's terror, and leave you dealing with mutinous, panicked fools, while supplies and fuel can run out and leave you stranded. Even if you die, well, that's not really the end. The zee is endless, and you can just create a new captain, one who can have a variety of ties to your last, or even pick up their inheritance. 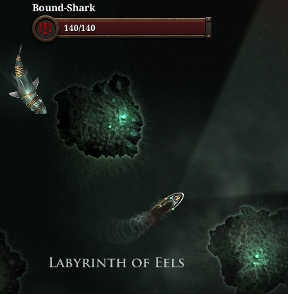 If you enjoy Fallen London, then the good news is that Sunless Sea is essentially Fallen London wrapped around sailing, naval combat, and resource management. Once you create your character (you can choose a name, portrait, and form of address... the gender is left to you to decide), you'll choose a goal, which could be anything from recovering your father's bones to becoming a legendary poet. In the beginning, your crew will be quite small, though you can hire on others eventually, and these people(?) will affect your stats... which aren't as usual as you might be used to. Hearts, for example, help with your overall defense, while Mirrors tend to your perception and trickery. These values not only help you in combat, but also in various challenges that can pop up in the text portions of the game, such as hiding contraband at the docks or fighting off would-be robbers. While these are important, however, so too is your Terror... this increases both when strange and unsettling things happen, but also from sailing in particularly dark and dangerous places. If it gets too high, the strain on you and your crew could be dangerous, but it can be reduced through certain activities.

While in town or any other port, you'll be able to undertake a variety of quests, providing you meet requirements that typically ask you to either have certain items or have experienced something, as well as manage your ship and its inventory. While Sunless Sea is still, at its heart, a narrative-driven adventure, your ship is more than a little important since it's how you make your livelihood and travel around these dark waters. You need to stay stocked on fuel, since you'll be stuck adrift if it runs out, and supplies to feed your crew, lest they starve and grow mutinous. Don't forget to repair your ship when necessary, or even upgrade it with new weapons and equipment... see, as you sail, you can come across everything from gigantic moths to pirates, and if they spot you, chances are they'll move in. When you enter combat mode, you can still sail your ship freely, doing your best to dodge attacks, but you'll need to fire your weapons when their gauges are full if you want to take your enemy down. If your ship is destroyed, well, that's just one way the game can end in Sunless Sea, but if you choose to continue directly, your next captain can have certain bonuses from your previous one depending on what you've done. 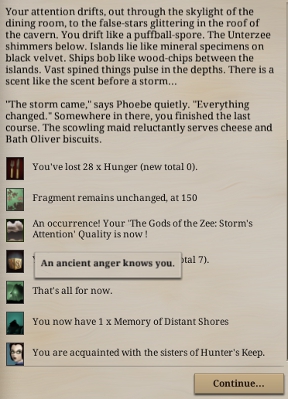 Sunless Sea is a little intimidating at first blush, with its myriad menus, bizarre characters and locations, and a multitude of variables, inventory, and more that seem to change after every single interaction. Playing it is a little like fumbling around in the dark, despite the tutorial, because figuring out what you should be doing to keep yourself supplied in Echoes, the currency of the game, and thus fuel and food, is harder than it seems. For some, however, the hardest thing might be the combat, or at least warming up to it. It just feels clunky and awkward, though this gets smoother when you begin improving your ship, at odds with the smooth and engrossing narrative-driven gameplay, mostly comprised of you and your foe slowly swanning around the area waiting for timers to refill. There's just nothing that unique or striking about it, which is strange given the world the game inhabits, which is otherwise so rich in weirdness and creativity. In a world where you can sell crates of human souls, deliver colonists in caskets, be driven mad by the fathomless darkness of the zee, you just sort of expect more than timers and numbers. Fans of Fallen London may likewise find the need to manage cash to keep yourself alive with fuel and supplies gets in the way of the flow of storytelling the game is trying to weave... at least until you get your sea legs.

At the same time, however, Sunless Sea represents a new foray into a beloved and fantastical world that has both teeth and the morbidly mystical in equal measure. There's something more than a little hypnotic about its quiet soundtrack and dark atmosphere, and the rich storytelling paints a world thick with the sort of creativity and imagination more games should have. Some quests can even have drastically different text on different playthroughs, especially as relates to your captain's past. While you can expect to get your nose bloodied on your first few playthroughs as you figure out the best way to keep your ship supplied and in one piece, Sunless Sea unfolds into a vast underground world filled with stories to experience, with new content being added all the time. Some of these adventures are small and simply strange, while others are grand and grotesque... you could discover what happens when you dare drink with the Tomb Colonists at Venderbright, or wind up entangled in a bizarre game without realizing it when a simple game of cards one night in port takes a turn for the weird. The cargo trading here isn't as developed as other simulations, mostly because it exists more to drive various plots than to help you make it rich. Sunless Sea is incredibly adept at pulling you into its strangely compelling world and making you feel like there's always something more to discover just over the next wave, or even the next time you start a new game. It's a slow, dream-like game, best played sunk deep into your favourite chair with the lights turned low when you're in no hurry to get anywhere. Like the zee itself, once you've gotten a taste for it, don't be surprised to find it calling to you.

Dang you to heck. Failbettergames. I was supposed to get a lot of work done this weekend, but you ruined that completely. I kept thinking "just one more expedition". Just one more captain. Oh, and I had to get reports from those two ports. And map that part of the Unterzee. Just that tiny little part... and the part next to it, perhaps.
I got no work done, at all. IT IS YOUR FAULT, FAILBETTERGAMES!