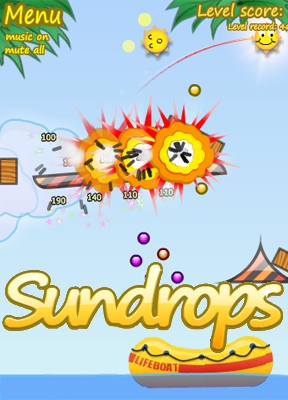 Under normal circumstances, the idea of the sun spitting parts of itself towards us is prone to inspire some form of panic. But put it in a Peggle-style game, with a dash of physics puzzle phuzzling and Breakout, and it's a fun day at the office. If only Nostrodamus packaged his end-of-the-world musings like CCat Games' Sundrops... it would have saved him the trouble of all that cryptic poetry AND he'd have made the afternoon go by faster.

Unfortunately the doomsday talk is purely for the lumbering intro. There is nothing remotely morbid, apocalyptic or devastating about this Peggle-style game. Armed with a set amount of shots, you have to hit all the coloured pearls before you run out of firepower. In typical fashion, it comes down to how shots rebound against surfaces, managing the angle and power of shots with the mouse. With a splash and a Worms-like "Bye Bye!", your ammo (little suns) disappear into the ocean after falling to the bottom. But a bit of timing and luck, though, can spare them. Bobbing along the bottom is a lifeboat, which moves back and forth. Every shot that lands in it is recovered and loaded back into your ammo count. It certainly takes the edge off the game a bit, because often shots rely on luck. Obviously as you get better at the angling and power, you control the setup a little more. But there is always a little bit of chaos at work, especially when powerups come into play.

Several of these powerups alter the gameplay. They cover the general family of breakout-enhancements: split shots, extra shots, larger and smaller ammo, score multipliers and a ghost mode that passes through obstacles. In turn, the obstacles include the usual curved and angular surfaces, moving parts, movable obstacles, sun-devouring lava and bouncing pads complete with pinball sound effects. Exploding pearls add a little bang to some proceedings.

Apart from the regular game (44 levels), there is a Kid's Mode (unlimited shots, but fewer levels and no overall score), Survival Mode (start with a finite number of shots and see how far you get) and Time Attack (unlimited shots, but only a minute to complete each level). All of these modes are unlocked quickly via the normal game and sorts out any variety problems the game might have. The level selection is a bit unbalanced and some are beyond the realm of strategy. But the little lifeboat is a real gamechanger and often you spend more time predicting if the shots will land in it then how many pearls they will pop.

Initially Sundrops didn't quite grab me, but it manages to capture the best parts of all the genres it borrows from. It's no classic, but you won't be asking for your time back, either.

For those who are used to Peggle, there are a few things it could take a while to notice on your own: you can control the power of your shot by cursor distance (a gentle lob is sometimes crucial), and you don't have to wait for the previous shot to fall before shooting again (important for grabbing power-ups).

I liked it. A silly little diversion.