Have you ever stopped to think about the little cubes of sugar you put in your tea? Like, maybe they don't really appreciate being dropped into scalding hot liquid? Sugar Cube: Bittersweet Factory is a creative puzzle platform game from TurtleCream that tells the story of one little sugar cube that wasn't too keen on the idea of being put into baked goods. Eyeing a method of escaping the factory, he hops from the conveyor belt and begins his escape, one stage at a time. 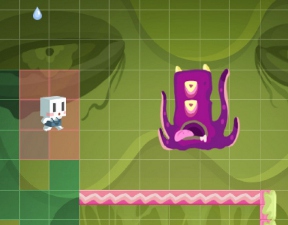 Sugar Cube controls like most platform games with simple walking and jumping commands, but with its unique tile-flipping feature, you'll have a tricky time doing either of those things reliably. The world is divided into a tiled grid, from background elements to just about every solid object you see. Move across a grid space and the tile will flip over, often revealing different elements on the reverse side. Platforms disappear, blocks materialize, springboards vanish and morph each time you cross their paths. It's chaos, but a controllable chaos, which is where Sugar Cube gets its delightful puzzle elements from.

Instead of randomly running through stages hoping you'll make it to the exit, you can press and hold the [shift] key to prevent tiles from flipping as you go by. This means you have a bit of control over what happens when you move, though exerting that control is an exercise in speed, timing, and luck. One wrong move and you'll be powdered sugar. Which, we assume, is analogous to being dead. 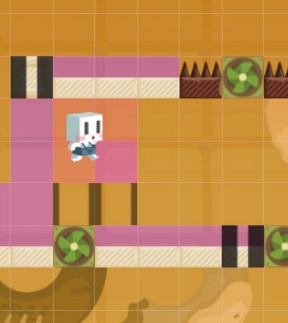 Analysis: Sugar Cube is a good mix of puzzles and classic platformer accuracy. Half the time you're fretting over whether or not you can make that jump up ahead, while the other half is spent wondering how on Earth you're supposed to cross the screen with those flipping tiles everywhere. Experimentation goes a long way, especially since you usually can't see what's on the reverse of a tile, and even when you die, you're not really punished, making it a very forgiving sort of game.

Sugar Cube is a bit of a short game by indie standards, featuring around four hours of gameplay from start to finish. It doesn't feel too short, nor does it drag on in later levels, it's just the right length to play out every tile-flipping mechanic the designers could think of. Enemies and boss battles spice things up a bit, but otherwise it's just you and a fevered escape from the conveyor belts.

A simple premise executed with charm and style, Sugar Cube: Bittersweet Factory is a little bit of unique platform gaming that's a great play from start to finish.