It lurks in the shadows, always staying just in the corner of your eye, having you unaware as it sneaks up right behind you. Goblins be here, or really just one goblin, Styx. And there's no reason to worry about him. He'll just pickpocket you.... or slice your throat open, or snap your neck, or stab you in the kidneys. Hmm, on second thought, there is a lot to worry about, or would be if it wasn't this foulmouthed, toilet-humored, goblin you're helping through this action adventure stealth game aptly called, Styx: Master of Shadows, by Cyanide Studio. Steal, assassinate, set traps, cause diversions, but mostly sneaking around without being seen in this high difficultly roleplaying game. The whole reason for all the prowling and silent death dealing, is to get to the center of the World-Tree, in order to steal the heart of this great magical flora and possibly find out why there are so many voices in your head. Oh, and trying to remember what happened before you woke up. That may be a good goal too. 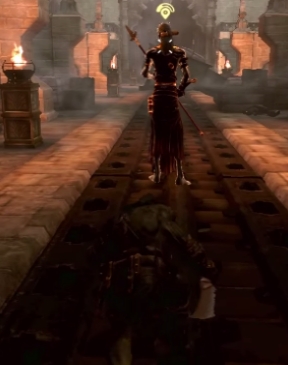 Styx: Master of Shadows is a true blue stealth game. You're not really made for one-on-one fighting. Getting into fights you can only parry until you have a chance to land a death blow, so more than likely you're going to end up dead if you get the attention of more than one guard. Thankfully, in this world of goblins, World-Trees, and other mythical creatures and plants, there is also magic. The World-Tree is made up of a glowing sap they call Amber, which has magical properties and, wouldn't you know, you're part amber. You can make clones of yourself to distract guards, pull switches, scout rooms, and even become traps for unsuspecting guardsmen. You can also become invisible for short periods of time, and use Amber vision which lets you see the room more clearly, as well as living things and where items are lying around. Since all these things are done with the use of the Amber, you'll need to drink more when you start to run low. Items in this game are hard to come by and you'll need to make sure you use all of them as wisely as possible. 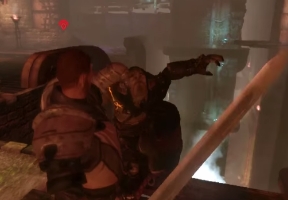 Even if you run out of Amber there are plenty of other ways to get around without becoming a smear on the floor. Being small as you are, you can slip under tables and into lovely placed tunnels as well as hide in drains, cupboards, and chests. Guards are a bit smarter than you think, and if on alert, they'll check in these hiding spots and pull you out by the green skin of your neck. Guards will also alert others to ready their weapons if they have spotted but lost you. A guard with his weapon out is much more wary of his surroundings, so the best plan of action is not to get caught and eliminate those who may spot you with an attack from behind. A quick press of the button is a quicker kill, but the unit has time to shout out for help before he meets his maker. Holding down the button causes a muffled kill, which is much quieter but much longer as well and still produces sound, usually when their dead body collapses against the ground. Upgrading your skills you can soon gain the ability to grab around corners to kill the target undetected, pull someone off a ledge to their death and even, aerial kills, or as I like to call them, death from above. 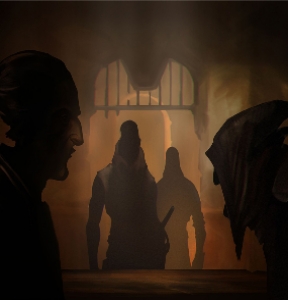 Analysis: Prepare yourself for some of the most frustrating levels you've ever encountered. You're going to die. You're going to die repeatedly, possibly in the same locations multiple times. You're going to die so often you should invest in a punching bag. You're going to die so often you'll need a towel over your keyboard to stop your tears from shorting out your mother board. And that's on easy difficulty. Even for seasoned players easy should be looked at as "teeth grinding hard." Hard should be seen as Hell on earth. And Goblin? Probably for those who are purely masochist. What makes this game so hard? Well for starters, you're so squishy. Confrontation with anything is worthy of punishment and, oh, do they punish you. The only issue is that most ways you need to go, it is nearly impossible not to have confrontations, so the save is your friend. In the tutorial, the auto save works perfectly, saving right after any small accomplishment and bringing you back to life in the right spot to just keep moving. This is to trick you because when you finally get in the game there can be twenty minutes in between auto saves and a lot of luck and skill goes on in those twenty minutes. Trust me. If you don't spam your save slots, you'll probably be sobbing before the end.

The A.I. doesn't make it that much easier either. The best way to describe the feel of Styx, is a game that should have come out five years ago bringing the issues of that time with it. A fresh body killed on top of a new body will cause a small explosion flinging them away from each other. This is rather funny until one of the bodies moves just into a view of a live person and then you're caught. The A.I.s have a habit of running into each other, still walking and sliding rather oddly across the floor until something clicks in their brain and they realize they need to just move slightly away from each other and start over. All of this may make the game sound extremely buggy, but in the big picture, it really isn't, and besides is likely to get better with patches. See, Styx: Master of Shadow is a long long game. The maps are huge, with hundreds of bad guys and different pathways to find and explore. It gives you options of how you want to treat each mission and if you're stuck one way you can look around for an alternative route. Even after all that, and besides the mini missions, there are hidden puzzles, and badges to collect, coins to steal, and conversations to eavesdrop on. There is a lot going on and the world is your oyster as long as you make it to the end goal at some point. So with this grand picture, a little bit of a glitch now and then is no big deal and kind of understandable with how much they had to do per level. 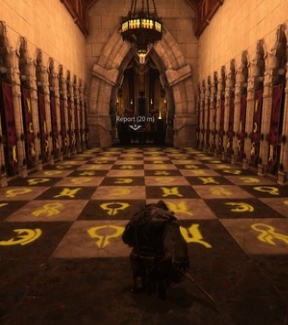 The game design is beautiful too - the backdrop anyway- most people's faces look like hardened play-dough. The buildings and the scenery are very pleasing on the eyes even though everything takes place in a single tower. But this tower was built by a unhinged inventor who wanted to keep things as complicated as possible and build something so large the eight wonders of the world could fit in and have plenty of elbow room. New enemies are introduced at a good pace keeping you involved and forcing you to change up your strategies. Even when you have to travel back through stages you already did, the guard placement and new tricks along the way make it feel fresh. The story isn't cut and dry either, and there are some clever tricks that keep you wondering as well as a deep psychological look into what makes a person a person. Not something you'd expect from a game that has a mouth like a unsupervised middle-schooler pretending to be a drunken sailor, with the humor to match.

As I said before, Styx: Master of Shadows feels like a game that came out a little less then a decade ago, but that is just its charm. Just starting this game fills you with nostalgia, and makes you remember all those long nights playing Thief: The Dark Project or even Penumbra. And the little crude hero, who you'll find has a habit of being stabbed, shot, squashed, and beaten to death, will win over your heart with his somehow lovable self. The game will win everything else over as even as you rage quit and stomp around for a while, you'll find yourself going back for more. It may be a bit of a bite out of your wallet, but Styx: Master of Shadows is well worth your money for the amount of playtime you'll be able to enjoy. And with every ounce of frustration you'll gain from the failure, you'll find three times as much in the success... sweet, sweet, murderous, gobliny success.

Hey, I know you have absolute freedom to review whatever you want, but doesn't it make sense more to review more free games?? I feel like recently there's been a lot of reviews for non-free games.

While we understand readers who prefer to read about and play only free games, we strive to provide coverage of games of all types. Our only criteria is that we enjoy them and want to talk about them, and we find games as they're released. :) Since the start of October we've reviewed 19 free games (not counting entries like Weekday Escape with multiple games), which works out to almost two per day (which is usually what we strive for) and 6 paid. In September we reviewed 61 free games, and 12 paid ones. I think that's a pretty good ratio. :) Even if you aren't interested in this one, I promise you you will ALWAYS find free content here on a daily basis.