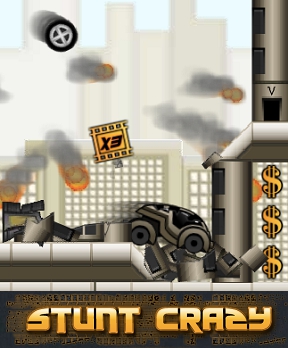 You can keep your CGI mippy-maps and digitally inserted explosions. In my mind, what the best movie stunts need is non-negotiable: An actual dude, in an actual car, making actual jumps (possibly with an actual dude hanging from the rear axle with an actual whip). I suppose then it's a little contradictory that I turn to computer gaming to recreate this real-life experience, but Stunt Crazy, the new physics driving game by The Podge definitely has the right spirit... and a ton of stuff that goes boom. Can't forget that.

In each of 24 maps, you are presented with a stunt to complete for a certain genre movie, and a certain map in which to complete it. Generally, you use the [arrow] keys or [WASD] keys to control your ramp-jumping vehicle, crashing into buildings, collecting bonuses, exploding barrels, and generally being awesome. You collect red, yellow, and blue movie reels to complete your stunt objectives, and by doing so gain cash, fame, and points, based on the ultimate box-office take. These can then be used to add new upgrades for your vehicle, unlock new levels, or design a customizable stunt-show for extra money. [Z] fires missiles to destroy building, holding [X] fires up a stunt-rocket that can blast you around the arena, and [C] launches a crash bomb for quick direction changes. And... ACTION! 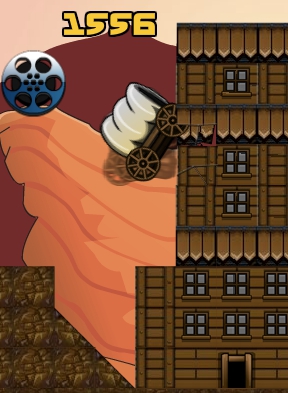 Analysis: Stunt Crazy ultimately feels like a fusion of the Hedgehog Launch and Indestructotank series, and is a lot of fun for being so. However, almost paradoxically, the combination is nowhere near as immediately accessible as said predecessors. This is a game with a steep learning curve when it comes to the controls and mechanics, and only really gets enjoyable when you manage to get the hang of it. What kept me persevering is Stunt Crazy's light-hearted tone. The spoofy film names, dead-pan stunt descriptions and snarky newspaper headlines did a lot to make me want to keep going and see where my stuntman's career would take him. A sense of humor cannot make a bad game good, but it will make the player give it the benefit of the doubt. In the end, I stuck out the initial awkwardness (which, after all, might just be on this side of the screen), and I'm glad I did. Stunt Crazy is solid and only gets more over-the-top and explodier as the levels progress from sci-fi, to horror, to western, to fantasy. Ever wanted to do backflips all over a frontier town in a Conestoga wagon? Now's your chance.

I think that Stunt Crazy suffers a bit from the problem not uncommon to many upgrade-based games. Most games have the natural progression of being easy at first, then more challenging as time goes on. Here the evolution is flipped: the game is difficult without any upgrades, and only becomes easier and easier as you buy them. Certainly skill has something to do with it, and Stunt Crazy's does balances itself with levels that get ever more complex as time goes on. Still, I hate the feeling of not wanting to start up a game on a certain computer, solely because the version of game I like, the game for which I've upgraded the mechanics, is saved on another one. Does that makes any sense?

Anyways, despite the balance issues, and car tires that fly off if you so much as look at them the wrong way, Stunt Crazy is a lot of fun. It has a sleek art style, some cool arcade-rock-sounding tunes in the background, and the various multiplayer and sandbox creation modes are quite cool. I really felt accomplished when I was able to snag a tricky low-hanging reel, or was given a fictional stunt award. This game may drive you crazy like nothing else, but once you get into it, you just can't help yourself.

I love the concept, and the gameplay is great! Unfortunately, the super-sensitive tires issue renders this game frustratingly unplayable for me. If only there were an upgrade for that...

good game. but disliked the restart button. Not only does it take you back to the "loading" screen of that level instead of starting over my computer refreshed the page restarting the game too. Another buggy feature is even though it never shows a click ad, it spams your history. I wanted to go back to a different site that I had closed out of and it was listed at least 50 times.

I believe it's the ad next to the game that is "spamming your history" as the developer of the game we have no control over our sponsor's site.

The re-start function has to re-generate the level, this "loading screen" isn't a loading screen, as in the level doesn't load, it generates and it has to be like this to make the game run well. Sorry if that wasn't clear.

About losing your wheels, we never intended to make a driving game, you really only need your wheels to launch yourself off the ramp. Maybe we could have been clearer on that point. If we make a sequel we'll maybe make some changes to that aspect. I think a lot of people maybe don't get the game, it's maybe a bit different to what was expected - a victim of it's own originality?

"Still, I hate the feeling of not wanting to start up a game on a certain computer, solely because the version of game I like, the game for which I've upgraded the mechanics, is saved on another one"

That's the same for all flash games or am I misunderstanding something?

I also disgree with the previous comment:
"Most games have the natural progression of being easy at first, then more challenging as time goes on."

1. Yes, and while I do mention it is not an uncommon problem, this one I felt more than most. It is not so much the losing of progress that is at fault, but the initial awkwardness. Not wanting to start a new game because the early bits aren't as fun as the upgraded bits is a flaw: ideally, even if games become more fun the better you get at them, shouldn't they also be so right from the start? Drive Crazy is really fun, but you have to work at it.

2. Again yes, and that's a concern with the genre: fun coming with the joy of progression being launched ever further. Here, though, the game is based around steering, acceleration and control, not distance. The closer equivalent here might be racing games that make you drive beaters until you can unlock the Ferrari. It just seems a little arbitrary.

Not going to say QWOP levels of frustration in controls but it comes pretty close. On the ground and pre-launch everything is as expected... and I suppose the aerial aspect is as expected when you attach a rocket onto a car - very sloppy and hard to control. I had to be meticulous with thrust while the hypersensitive rolling didn't help. An amusing diversion of a game, but I couldn't take the progression or upgrades seriously when all they did was make things harder to control, and going back to achieve gold medals on older levels left me overshooting a lot of reels due to my uber stunt car.

have just too many hedges and not enough space.

Overall, this game is lots of fun. But whoever came up with the idea of "car-eating hedges" needs to be fired. Out of a cannon. It's just no fun at all. Maybe if you could use missiles or a crash bomb to get out of it, it might be more acceptable, but instantly wasting one of your precious takes with little or no warning is frustrating and it goes against the game's style of freewheeling craziness.

If I end up upside-down with no wheels, I can still hop around with my rockets and hope that I hit something along the way, but the moment some bush decides it wants a piece of my car, it's game over? Honestly, who thought that was fun?

Ahh - sorry about the "car-eating hedges". They are in the horror theme, so we thought it kinda fitted the theme - they are a bit annoyng, maybe the most frustrating thing in the game, which is why we saved them for the harder levels. We tried to make the fantasy levels more of a treat at the end.

By the way, you can use your crash bomb to get off them, but it has to be fairly well charged.

The game was inspired by King of Sweden 1/2 and King of Portugal games...

This game was actually inspired by Burnout's "Crash Mode" and Crush the Castle. I've never seen the King of Sweden games until just now, but I can see why you might think that was the inspiration.

Mr. Carl, it is true that the man-eating plants will release you after using a fairly charged crash-bomb, however, once it lets you go, it sucks you right back in again, making these horror levels nearly impossible.