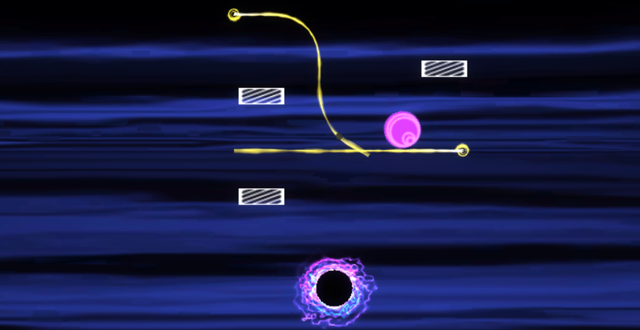 If someone has ever quipped "It's not quantum mechanics!" at you, well, this game sure comes pretty darn close. Wandering somewhere between the second and third dimension, trying to unravel the mysteries of the universe, it appears that you may have made a wrong turn somewhere. Now that you're somewhat stuck, the only way to progress is via solving some sort of puzzles. Imagine if you will characters represented by shapes, a square and a circle. Your goal is to guide them through a sequence of levels and hopefully find the exit so they can escape!

This puzzle physics game involves strings in its game mechanics, quite literally. You have strings that can bend, strings that can break, rigid strings that only rotate, and some strings that cannot be manipulated and simply get in the way. Successfully manipulating the fabric of space itself in this way will allow you to progress, but failure will result in the utter destruction of the space-time continuum! (Just kidding, fortunately someone thought to insert a reset button into string theory.)

Originally constructed for Ludum Dare 35 and ranking an impressive #30 out of over 1500 entries, String Theory was assembled by TeamSemiColon, who definitely knew what they were doing. It comes off as well-polished, complete, and even features voice acting for the characters. With the juxtaposition of bite-sized levels and the volatile emotions of the researchers, from excitement to consternation and back again, many fans of things quantum and platform will find themselves spellbound and eager to find out the next plot twist. 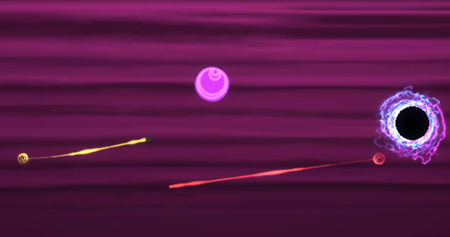 String Theory also features voice acting that is cleanly and professionally executed. The crisp sound allows you to hear the very emotions precisely in their voices as hope yields to befuddlement and back again. As you are transported through the levels, a stream of consciousness seems to run through them, as if seeing bits and pieces of a greater whole - just as the namesake would imply. Will you be able to solve the puzzle and free the scientists?

The game is controlled entirely with the mouse. As mentioned above, you can click and drag strings in various ways to manipulate the level and carry the shape(s) to their respective exits and advance the story. A feature of this game that I particularly liked is that many of the levels are fluid and do not require a great deal of dexterity to beat. Once you see what needs to be accomplished, you can fairly readily do so, in the manner of your choosing. The mouse controls on the strings are also well-programmed and are tight without flopping all over. So jump into the void between dimensions and have some fun - no strings attached!

Obligatory mention that String Theory 2 has been out since June and is a great sequel to this already amazing game.

Absolutely! You can expect a review for the sequel coming out in the near future.

Great puzzles. I almost quit the last level after about 10 tries, but I finally managed to finesse the ball into the zone.

Fixed, thanks! (And the other one too I think.)