The Strike Force Heroes thought they had seen the last of the GlobeX corporation. Weren't they completely destroyed by Alpha Team? But a series of random attacks has shaken them of that comforting illusion. From space stations hundreds of miles above the Earth, to the marketplaces of the kind of third-world cities where people go to disappear, to the Heroes' own base, nothing seems beyond GlobeX's reach. But, if they're going to push, then you'd better bet the Heroes are going to push back. Maybe that scientist GlobeX is so intent on killing can provide some answers... Strike Force Heroes 2, by Sky9 Games, is the action arena shooter sequel that's everything the fans of the original could have hoped for. 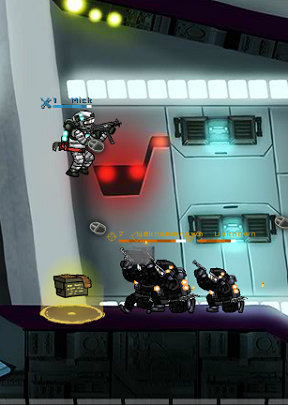 Your soldier moves, jumps and crouches with the [WASD] or [arrow] keys, and aims and shoots with the mouse. You can choose between four different classes to play as, each with their own strengths, weaknesses, and special weapons: Engineer, Mercenary, General, Juggernaut, and Sniper. You can set your two starting weapons in the Soldiers menu, and switch between them in battle with [q]. Successful enemy kills with a class will gain experience for each class, unlocking new weapons and abilities. In particular, there are "kill-streak" abilities, activated with [ctrl] or [E], after killing a sequence of enemies without dying. In a new mechanic, Reloading, Kill-Streak Ability Activation, or Weapon Switching can be assigned to right-clicking. Ammo and Health Packs are scattered around each level for replenish your stocks. Each level in campaign mode has various win conditions, be it a certain number of individual or team kills, capturing the enemies flag, or working as a team to face off against a single boss. Lock and load!

Analysis: Creating a sequel for a successful game can be a difficult proposition. Especially in the action-shooter genre, there is the concern that gameplay must be a recognizable continuation, without seeming repetitive, but containing enough new content to justify its existence, without alienating fans of the original. Strike Force Heroes 2 deftly approaches this problem by focusing on expanding the feel of the game's world. The development team has clearly focused on their strengths. As impressive as the selection of arenas were in its predecessor, here they are even better, with urban, futuristic settings that teem with life. The stand-out is a shoot out in a beautiful Japanese-style mansion that quickly gets totally wrecked with bullet-shells and bodies. The new character classes, weapons and level modifiers also add to the experience, and little touches of experimentation like a power-up slot machine will keep things fresh, and players old and new happy. 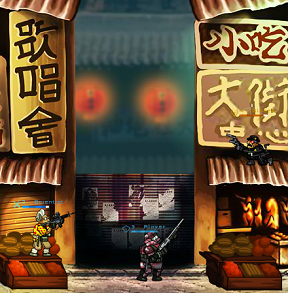 The negatives of Strike Force Heroes 2 come off as a little structural in nature, since, in all honesty, they seem to pop-up over and over again in the genre: the AI teammates whose behavior suggests they didn't do too well on their ASVABs, maps that seem blatantly favorable to one class or another, huge CPU-requirements, and a campaign mode plot that's largely a retread with a sci-fi element tacked on. And, by that we mean, clones are involved, because clones are always involved. It is perhaps unfair to take Strike Force Heroes 2 specifically to task for these issues. Still, it makes you wonder if anyone noticed during testing that, say, if 25 kills are required to pass a level, then the player is probably going to have to be responsible for at least 23 of those and spend most of their time hoping their AI comrades aren't charging themselves into the spike-pit too often.

Still, when Strike Force Heroes 2 does many more things right than wrong, and when it is good, it is very, very good. The game ends on a pretty large cliffhanger, which we can only hope portends further installments. For now, though, Strike Force Heroes 2's mass of content should keep all fans of furious action satisfyingly glued to their keyboards for at least a fortnight, or until they unlock the Sheep Cannon, whatever comes last.

How do you get the secret medals?