Strike Force Heroes: Extraction from Sky9 Games continues the arcade shooting browser games on mobile devices, introducing rooftop running as a central mechanic lined with ample amounts of gun fire and upgrading. A creative "cover" mechanic sets it apart from the rest of the endless runners in the crowd, making it both a strong contender in the mobile race and a suitable follow-up to the Strike Force Heroes series, too! 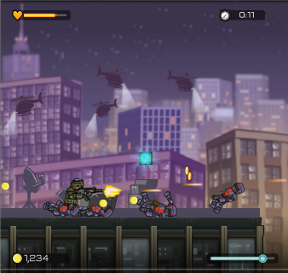 Strike Force Heroes: Extraction's controls have been boiled down to just the basics. Your character runs on his or her own, all you have to worry about is, well, not dying. Tap the left side of the screen to jump, holding there for higher and longer jumps. You can swipe down to stop running and take cover, allowing you to strategically bump off enemies in your path by tapping the right side of the screen. You can shoot while on the move, too, but beware that running into enemies slows you down and causes a bit of damage. You've got to keep an eye on your health, as running out of hearts is a bit more of an issue than running out of time.

Playable characters are one of the big selling points in Strike Force Heroes: Extraction. You have not one or two but 20 in all, each unlockable for a certain amount of in-game coinage. Characters come with flaws and perks, the latter of which are upgraded by performing different activities during play. For example, Cate is an ex-cat burglar with a stealth skill that is unlocked after killing 40 enemies while taking cover. Singe wears a fire proof suit and gets stronger the more explosions he survives. Not only does the character system encourage you to play the game in different ways, it also adds an enormous amount of replayability, especially when you consider the number of guns you can buy and upgrade. 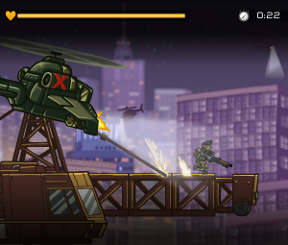 Strike Force Heroes: Extraction comes with three main modes of play: Campaign, Survival, and Free Run. The former is the meat of the game that sends you through stage after stage of running and gunning. Start here to experience the game's story across 30 different levels and unlock the other modes. When you're in the mood for a challenge, hop over to Survival to see how far you can run in a handful of special stages. Finally, Free Run lets you cut loose and simply hoof it. No guns, just runs!

Analysis: Strike Force Heroes: Extraction has long been a favorite shooter browser game. This mobile experience has been tweaked to better fit mobile devices, turning it into something closer to an endless running/shooter hybrid. It hasn't lost any of the action or strategy (or shooting!) in the transition, however, and you'll be pleasantly surprised just how captivated you are with the high-speed re-imagining of Strike Force.

For all its action, speed and upgrade goodness, Strike Force Heroes: Extraction does have a couple of weak spots. The cover mechanic, for example, isn't quite as precise as it should be. Swiping down on the screen seems simple enough, but when you're dashing along rooftops, your attention isn't exactly riveted on how far your finger moves across the screen. Sometimes you'll jump when you mean to swipe, which is frustrating when you're on a good run.

Despite some slightly blurry visuals that spin by at high speeds and an occasionally iffy combat mechanic, Strike Force Heroes: Extraction is easily one of the top arcade games on the mobile market. It has the ability to draw you in with quick stages that only take a few moments to play, but the longer you stick with it, the more characters you'll unlock, the more perks you'll get, the more weapons you'll use, and the more awesome the game becomes!