Moon Logic Enterprises has discovered an imposing tower on a planet once thought barren and lifeless. They have recovered several stone tablets, apparently the scriptures of a lost civilization. While the excavation is still ongoing, it is up to you, a professor of xenolinguistics, to translate the text. Doing so just may unlock the mysteries of those who once inhabited it. Stuart Madafiglio presents Stranger Than Fiction, a cryptogram puzzle-based rumination on life, the universe and everything. In each puzzle, you will be presented with an untranslated passage from the alien mythology. Reconstruct the alphabet by pressing two letters in sequence on the keyboard, to switch their places, or click them on the alphabet listing at the bottom of the screen. Once each section is translated, a new one will be unlocked, 28 puzzles in all. 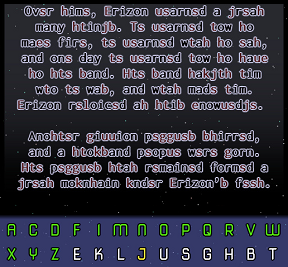 Stranger Than Fiction's challenges are rather on the easy side, admittedly, but the process of decoding and decrypting has a thematic unity with the parable at the heart of the story. The pacing is near-perfect, with each solution providing just enough intrigue to keep players pushing forward, while the puzzle-pondering provides the bit of reflection time that the prose deserves. The little touches, like how the final, correct alphabet for each passage will spell out words relating to it, show the amount of thought that went into the game's production, and largely, it pays off. While gameplay may have limited appeal outside of cryptogram fans, and any work with theological themes can't help but be a little provocative (even if it is alien theology), as a whole, Stranger Than Fiction presents a meditative, original, and quietly satisfying peek into another world.

Hey, while you're translating, pay attention to

what the alphabet is doing.

spells out a word related to

the puzzle. I solved a couple of levels using this trick without even reading the puzzle until I was done. I like this one.

At the risk of overselling, this is WONDERFUL. A deep and moving little story .

Yes, it's a little too easy--I wish there was a sequel (looks like the ending left a little room for more) that's harder. But that's only testament to how solid this offering is.

It won't load for me, with IE or Firefox. Suggestions?

It's an HTML5 game, so it probably won't work in IE. I did get the game to load in both Firefox and Chrome, on both Windows 7 and Mac OS X. Try reloading the page in Firefox.

I wonder if there will be a sequel.

There certainly were a few loose ends. What about Mendik? Are we to accept that he just happened to have lightning strike him and his bricks repeatedly? Was it coincidence? Or just a story told by their civilization, corrupted to explain the tower? Or might there be something more to it?

And what eventually became of their civilization?

What happened to Mendik was probably quite simple if you take a step back and think about what was he doing at that time. He was on top of a very tall tower, the highest point in the entire area, during a thunderstorm. He was making himself a living lightening rod. Notice how the bricks got stuck when he held them up.

So much for being a scientist...

Hey, what do y'all make of the levels:

2nd of Advent, the 6th of Believer and the 4th of Ascent, where

seems to be in no particular order?

All the others made some sort of sense...

Didn't really care for this at all. The gameplay was trivially simple. The story was intriguing for a while, but the ending was enough of a downer that it felt like a waste of time at the end.

Huh. Surely Firefox hasn't updated so drastically in a year as to render the source code obsolete and the game unplayable. I get the start screen complete with music and chapter select buttons that light up when you mouseover, but clicking them does nothing.

I'm having the same problem but not only in Firefox. In FF and Chrome on another site I only get the music and no title screen even. Clicking around blindly doesn't matter. Maybe something to do with changes in HTML5 standards?

Yup, doesn't work on Firefox, os10 I get the music and chapter buttons but they don't do anything.

I came over from "No-one Has To Die" looking for more from this creator.

3,415 Views
0 Comments
jayisgames.com— Who doesn't enjoy gaming? Especially online gaming. It is a great way to unwind after a long day and transport yourself to a different world. There is a wide variety of games you could enjoy but irrespective of what kind...  ...