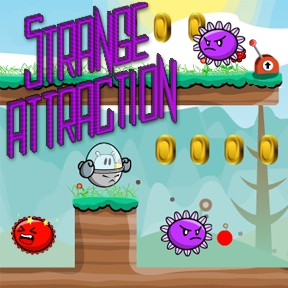 At one time or another, haven't we all wished we could have super powers? Who hasn't dreamt of wearing a large egg-shaped suit capable of granting its wearer the ability to jump 20 feet in the air and punch through walls? And doesn't everyone wish they could just pull a switch to instantaneously invert gravity? (Well, most of us not unfortunate enough to be outside, that is.) All this is possible in Character Arcade's newest action adventure game, Strange Attraction. As the accidental hero Gus, you are called upon to save your fellow blobby-shaped villagers from the vile clutches of a horrible cage-like machine. Along the way you'll encounter challenges and enemies across three worlds, with coins to collect and various medals to earn based on your time.

Strange Attraction is a standard shooter-platformer with a slick presentation and interesting gravity elements. After reading through a comic book-like intro, you get a quick tutorial on the controls. The standard [WASD] / [arrow] keys make Gus move and jump really high, while the mouse controls Gus' aim and punches using gray boomerang-like boxing gloves. The goal of each level is to get to the magical vortex to warp to the next area, though it is usually closed off by some type of barrier. Sometimes punching various buttons opens this barrier, while other closed gates require you to trap enemies inside cages before letting you pass. Many levels also require you to reach certain areas by punching gravity switches. These switches can make Gus walk on the ceiling, or cause the entire level to rotate upside down.

Game mechanics aside, much of the charm of Strange Attraction is in its style and visuals. Everything is presented in a friendly cartoony manner, with vivid colors and rounded edges. Later levels use dramatic shadows and color contrasts to help set the mood. Strange Attraction also has a colorful assortment of baddies ranging from spiky plants and floating orbs, to evil-looking floating meatballs and spiny whomp-like walls. All this is accompanied by a groovy electronic-style soundtrack that keeps things moving nicely.

All told, Strange Attraction is a fun romp through an interesting new world. While the game itself is not particularly difficult to get through, the challenge is in getting through the levels quickly while snagging all the coins, a task requiring a bit more effort and ingenuity. Notably, the controls used to do this are a bit pokey, and you might end up dying a few times leaving some of the levels' vague boundaries or landing on offscreen enemies. Due to the game's forgiving nature, though, these issues shouldn't prevent you from enjoying your stint in Gus' super suit. So what are you waiting for? Tap into your inner blobby-hero and give Strange Attraction a try.

Yet another game that I can't play because:

1) I disable Flash by default in Firefox and Chrome.
2) The game won't load without first forcing me to watch a video advert that I have no interest in.
3) It doesn't appear to work for me even in IE 8.

Does anybody have an alternative link where I can try this game without having to sit through obnoxious adverts for cell phones and pointless, mind-numbing suggestions that I want to "enhance my experience" by "connecting" with my "Facebook friends"?

[Hi Rose! Free Flash games are, more often than not, ad supported, so you might want to realign your expectations just a bit. And this game is loading just fine for me in IE, Firefox and Chrome. Try disabling your browser extensions as I'm sure it's something that you have installed that's blocking your ability to play. -Jay]

haha its a physics joke!

strange attraction. as in quarks.

charm quarks.
strange quarks.
get it?
am I alone here?

No Loadey in Chrome & IE. Never gets past "Your game is loading" screen.

[The game is loading just fine for me in both IE and Chrome. Try updating your Flash Player and disable your browser extensions. -Jay]

You may also want to try clicking on "Compatibility View" for the page in IE8 - that sometimes fixes issues.

Appears I'm not the only one having strange problems with this game. I see the title screen, but when I click play the screen goes white. Now I hear the ads playing, but I can't see them. The game doesn't return once the ads are done, either. Running in Opera 11.00.

Ok, so I just upgraded to Opera 11 on both Mac and Windows and I experienced different results.

On the Mac, the initial ad loads, after a short delay, and allows the game to be played soon afterwards.

On Windows, however, all I get is the blank white screen and the ad never loads.

I suggest using a different browser if you're trying this on Windows/Opera 11.

I had no problem loading the game in Chrome, but I do have to say I found the jump mechanism frustrating to the point of ridiculousness. I understand that part of the game is that you are supposed to be able to jump very high/far, but there is ZERO finesse to the control and what should be rather simple jump maneuvers turn into a time consuming exercise in frustration. I had to quit because of it. Ah well.

Also just getting the white screen. Off to play something else.

I agree with hothotpot. The jumping controls lacked any control. Your character would easily slide off any surface. Often in playing it felt like you had no control over the circumstances that lead to your death. It never feels like you have control at all over anything. Terribly frustrating game.

Heh - in my case the lack of jump control keeps landing me between the first switch and first door of the first level of the tutorial - after which I can't do anything except clicking the mouse anymore.

The artwork looks good and interesting enough, but I won't be around to see more of it...

The jumping is too floaty for me. I died more times than i should have because i couldn't stay on a platform i jumped onto. I constantly slid off into the abyss. After 10 tries on such an early level, i gave up.

And that saddens me. It looked like such fun.