Get Set Games' iOS title Storm Casters is essentially a very casual roguelike action RPG mixed with am arcade-style shooter. You play either a young man or woman who sets off to rescue their fellow villagers from the monsters that pillaged your town and winds up getting a set of really sweet magical abilities to enact your revenge. Helpful, since the monsters have holed up in a massive dungeon. Oh, and the dungeon's floors change every time you enter them. Oh, and each set of floors has to be unlocked by defeating multiple bosses. Oh, and the portal to each floor only stays open for a set amount of time, and if it runs out, you're teleported back to the level hub whether you've cleared the floor or not. But hey, at least you can find and unlock some really sweet upgrades and special powers... oh, but they're randomized every time you die, too. You know, I don't remember Dresden ever putting up with this. 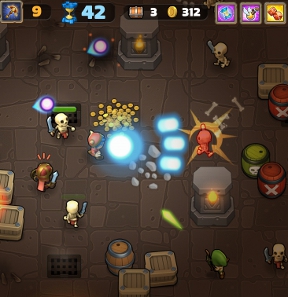 To play, use the left onscreen analog to move, and hold down the right button to fire. You'll automatically attack anything within range, and though you can find various spells and power-ups to help as you unlock them, spells can only be used onces, and power-ups have limited ammunition. Each "zone" is broken up into a series of floors, which are in turn made up of a series of rooms and bosses, and you need to clear them all in one run to unlock the next zone, all while the clock is ticking, unless you're on a zone's final boss. If you die, you'll keep your treasure, gold, and experience, but you'll have to start the zone all over again, and only have one heart to boot. The gold you collect can be used once you die to increase your attack and the length of time you have before a portal closes, as well as to permanently upgrade your character's attack and timer caps, but even more important are cards.

See, you earn cards as loot, sometimes for beating a boss or found randomly in special chests, and each card has a different ability. It might increase your attack, better your chances of finding specific power-ups, increase your character's speed, or even have multiple stacked enhancements. The catch is that you can only take three of your available cards with you, and you don't get to pick them... each time you die, they're randomized, and while you can spend gold to get another three random picks, the amount you have to pay goes up each time you do it in a row. You can also spend warp stones, awarded throughout play (or bought with real money via in-app purchases if you're impatient), to buy booster packs of cards. Get more than one of any particular card? Fuse them to power-up and make the card even stronger. 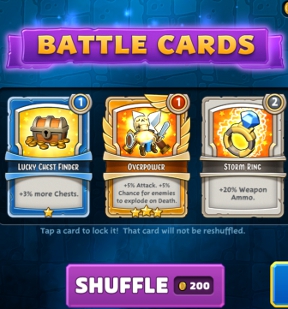 Analysis: As much as the fire of a thousand RPGs might flow through my veins, there are few things I love more than a good shooter or roguelike. Storm Casters combines both these things in a simplified format that makes it easy for anyone to pick it up regardless of their preferred genre pedigree, but also might lack staying power for players who prefer more variety and challenge... over less grinding. By design, you have to fail before you can succeed, since you have to grind gold to upgrade your character, but you can't actually do so until you've bit the dust as after death is the only time you gain access to the upgrade screen. The single heart you get upon resurrection feels pretty pointlessly miserly, and being unable to upgrade your character's speed stings when it often doesn't feel fast enough to get of range of an enemy's melee attack, or dodge the myriad of projectiles that wind up on the screen in later levels. The game winds up having more in common with a bullet-hell style shooter, so not having it be as responsive as one can rankle.

That said, embraced more as an arcade game than anything else, Storm Casters is a lot of fun, and addictive in that "ouch, my thumbs" type of way you don't usually get on an iPad. The amount of power-ups and spells available is pretty darned substantial, and all of them feel unique and valuable in different situations once you start to play around with them. Though the first handful of zones feel repetitive and easy, the meaty variety of enemies that show up later on, not to mention hazards like spike traps, lava pools, and fire blasters, make things downright frantic. The game is generous enough with gold, cards of all rarities, and warp stones that it never feels like it's even close to trying to push you to shell out real money. It's a big, vibrant, chaotic action game that'll keep you grinding away long after you mean to put it down, and its easy to pick up mechanics make it dangerously simple for just about anyone to lose their free time to it.