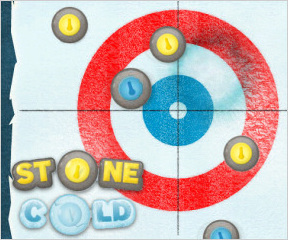 Stone Cold Curling is another well-polished game by Preloaded, the makers of CDX, Death in Sakkara and Shootin' Stars. It's a simple Flash version of curling where your goal is to slide stones to the end of a field and come as close to the center of the target as you can.

Use the arrow keys to move the stone left or right before taking your shot. Press and hold [space] to give it a kick, the longer you hold the button the more powerful your shot will be. While the curling stone is between the dotted lines you can give it a spin by pressing the left or right arrow keys, though don't expect it to change the outcome very much.

Also available to spice things up: bombs. If the target gets crowded with those pesky computer-controlled blue stones, just aim your stone straight ahead and click the bomb icon to knock them off the board. Great as a last resort desperate measure-type thing, and strangely satisfying as well.

Analysis: All of the gameplay in Stone Cold Curling centers around physics, and Preloaded obviously spent a lot of time on them. They feel spot-on except for maybe a little extra glide at the end of long, powerful throws. But only a little. The controls are intuitive and the visuals are well-polished, making the game a breeze to get into and enjoy. Just like potato chips, you can't have just one, and each time I played a round of curling I settled in for two or three subsequent matches just because I could.

A very well made game but it really lacks some challenge mode... A tournament or at least different difficulty levels?

It's taught me that I stink at computer curling, that's for sure. Looks like a fun game, but the computer just outclassed me every single time. One shot and all 4 stones dead on target? Come on!

They have the curling physics down pretty well, but the bouncy backstop really changes the game dynamic.

The computer's pretty dumb too - all it knows how to do is throw it down the middle, fast.

Multiplayer curling like Gamesheep's "Trick Hoops" would be fun.

well I discovered that I am hopeless at curling too! lol I had several goes and lost each time by a lot. But then my nine year old had a go and beat the CPU first go. *glares at him*

A couple of quick notes:

1. Turn order: Whether you or the computer leads off needs to be randomized.

2. Physics tweaks: At certain times, the stones in the scoring area lose their true momentum and slide orthogonal to an invisible cartesian grid; entirely horizontal or vertical (which could very well be an error with the vector math code).

It's kinda fun...a little unrealistic with the bumper at the back and lack of competition from the computer, I have yet to loose a game. I at least expected the computer to put spin on the rock instead of just shooting straight and hard. Also, it's not set up like real curling with 10 ends, this only has one which was a little disappointing. I don't know if I like it or not. Either make the game out there and totally unrealistic with a lot of cool extras or make it true to real curling.

The AI for this game is fairly abysmal, to be honest - they've turned "chess on ice" into "knock a random stone as straight and hard as you can". It wouldn't be awfully tricky to create a proper curling flash game with tactics, ten ends, sweeping, corner guards, agressive and defensive play etc. etc. Perhaps making it an aiming game rather than a skill one.

Nevertheless I quite enjoyed this game and found it a fun diversion.

Actually, now that I've reconsiled myself with the simple nature of the game I've started to enjoy it a lot. Anyone beat my 38800?

"Either make the game out there and totally unrealistic with a lot of cool extras or make it true to real curling."

Interesting. You hint that there is an uncanny valley for game design, which is not something I'd thought of before.

I've never heard of uncanny valley until I read the link you provided. Interesting theory, I tend to agree with it. As for it relating to game design I think that for me personally it likely plays a small role in my liking or disliking a game. I don't know what that says about me, I'd be interested if it's the norm for game players.

Sob, this game keeps preloading from here to eternity.

Yes, the game QUITE needs a random feature--the computer has gone after me every round, and sure enough, has won. It's becoming MOST trying that, despite their sad attempts for the first three curls, the last one almost always hits dead-on, and in the process, knocks mine off the target completely.

It's also sad that four of my curls in the target area mean nothing when their only one happens to be just that hair closer. It's not a complaint, because that's curling, but it's just sad. haha.

Also, I agree with Heavinlyn. I think that too in these 'realistic' games.