One afternoon, a knight decided not to wait until night to take his nightly knight-nap. And while the knight benightedly knight-napped alongside his knight sword, a wizard came along and stole . Thus when the knight woke from his knight-nap, he realize his knight sword had been sword-napped! The knight chased the wizard to the wizard's castle, only to get zapped with a nightmarish knight-spell. The knight could no longer jump, only knight-fall from ceiling to floor as his personal gravity was reversed. But only a weak knight would let that stand in his way, so off to recover his sword he goes! Stolen Sword is a gravity-bending puzzle platform game that will flip you so much, you might have trouble telling between night and day. 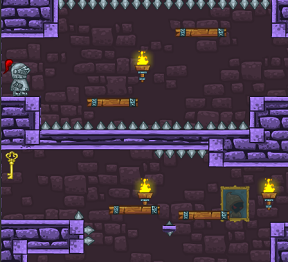 Use the [arrow] keys or [WASD] to move your knight left and right, pressing up to shift the gravity to make the knight fall up, and down to make the knight fall down. The knight keeps his forward momentum though, and beating the game will require you to master that as well. In each level, you must first pick up a key before making your way to the exit door. There are twenty levels in all. The obvious comparison for Stolen Sword is VVVVVV, still the gold standard in the flipping puzzle sub-genre. Certainly, requiring two keys to employ the gravity mechanic, rather than just one, took some getting used to, but it is not without its advantages. Stolen Sword is slower-paced than VVVVVV and beating it will require a greater proportion of strategy than reflex. One thing that Stolen Sword does share with VVVVVV is a high challenge level, and I don't mind telling you that I impaled many a knight on many a spike while going through the game. But while certainly some of the levels appear frustrating, even unfair at a first play-through, but they end up having a logic behind them that is satisfying to suss out, if only by trial-and-error (Though one must admit that after trialing-and-erroring so much to get there, the ending is a little weak.) Still, maybe it's just the summer slump of game releases granting me a dose of pat or maybe it's my frankly inexplicable love of cartoon knights walking on ceilings like Lionel Richie, but I found pushing through Stolen Sword strangely rewarding, and this good knight should give you a good night of fun as well.

Some cool level design but the controls are sluggish and the collision detection is wonky. The former could be a design decision, but there's no reason the knight should so frequently get stuck on corners or have bouncy ropes completely screw up his momentum.

The review says the ending was "a little weak". I'd have to disagree.

I'd say the ending was nonexistent.

This is only SLIGHTLY more playable than the version on Kongregate where it's next to impossible to beat level 4.

I made it to the bottom of level 6 but couldn't hit that bottom platform even once. I stopped playing there.

I don't think the game was properly play-tested. If play-tested even at all.

There's no feeling of "I almost made that, I CAN do it".
It needs a serious rethink for playability.

I have to agree with the previous comment, although I was at least able to make it one level further. But there I was facing the same problem: a jump/drop that's just impossible to make, without even coming near the very seed of an idea of seeing the solution on the distant horizon. Add to that the other imperfections in regard to the controls and the lack of originality, and it's just not worth continuing. 1 out of 5 mushrooms for me.

It's like...they just left out the whole section of code regarding the end.

I never got my sword back! Why did I go through all of that??

I'd prefer one single button for switching gravity. I get confused between up and down too much.

VVVVVV this is not, no matter how bad the creators wish it was.

Sorry for the double post, must have confused things when I hit the update button after hitting submit (things were taking an abnormally long time to respond for some reason).

To contribute more, I despise that the character slips on corners. There's nothing fun or challenging in that behavior, it's just frustrating.

Either games are getting worse or ... this game is barely playable.

The previous game from the same dev was clearly better:
https://jayisgames.com/games/bury-my-bones/

This game is impossible to play when you're drunk.