It sounds like something that would raise an eyebrow or four if it showed up on your hotel room invoice, but LongAnimals' Sticky Ninja Missions is just as cute and quirky physics puzzle platformer about a guy we can all relate to. He's got super ninja powers, adhesive feet... and, having completed his training, crippling student debt. But where the rest of us would be donating blood, eating ramen, and selling our My Little Pony collections on eBay to make ends meet, Sticky Ninja can earn all the money he needs by beating up the thugs who've taken over the city. Click and drag on Sticky Ninja to choose the direction of his jump, then let him go to watch him fly and then stick to almost any surface he lands on, horizontal or vertical. When he's in the air, he can bust through certain obstacles, but also take out any enemies he flies through or lands on with a single kick. Your rating in each stage depends on how many jumps you take to clear a level. Just watch out for deadly obstacles (marked with red) that can hurt you since you can only withstand a few hits before you'll be forced to restart, and pick up any gems you see to help your score. 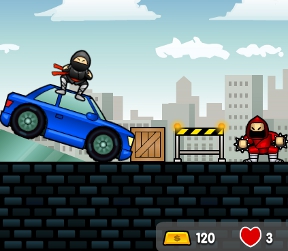 What's great about Sticky Ninja Missions is how much unexpected variety and challenge there is. Every level feels different thanks to some remarkably different environments, and it's constantly throwing in new things to keep you on your toes, from surfaces you can't stick to (some of which are simply slippery, and others that will make you rebound!), to enemies that you must use your surroundings to defeat, and even cases where you'll need to react fast to avoid hazards coming at you. It keeps the game from feeling like "just" a simple physics puzzle where you can relax and take it easy, and more like a dynamic platformer that takes planning to complete with the best medal. The presentation on the whole is much more polished than the original, though it actually feels less difficult in some cases due to the greater focus on static level elements rather than the wind, moving platforms, wheels and more that made up the first game. On the other hand, figuring out what you will and won't break through or stick to is initially sort of trial-and-error, and you're occasionally required to make some very precise jumps that require you to be in very precise positions beforehand. Despite its fiddliness, however, Sticky Ninja Missions charms with its creative design and carefully planned gameplay. I'm not saying I advocate wrapping double-sided tap around your feet, putting on black pajamas, and hopping your way around the city smashing things to solve your money problems, just that it would probably be less depressing than the alternative until the cops show up.