We've all been there. You want to change the TV channel, but the remote is, like... all the way on the other side of the room, and getting up would mean ruining this nice butt-groove you've been cultivating in the cushion. It's the First Worldiest of First World problems, but if you were Sticky Blobs, it wouldn't be a problem at all because you could just exude a few friends right out of your own body until you could reach whatever you needed. Because that's not unsettling at all. In MadFatCat's quirky World of Goo-ish physics puzzle, you're helping grunting, squishy, sentient balls of goop reach whatever they want by directing them how to grow. Click, drag, and release on any blob to grow a new one in that direction. You can only make new blobs if you have enough material, as represented by the bar on the left side of the screen, and clicking on a blob will destroy it and return whatever material was expended in making it. 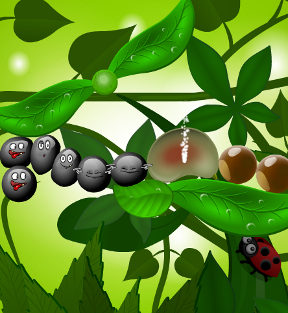 They don't all need to be connected, so you can split them off and move them in groups. Since they're beholden to physics and don't have feet, they can't move on their own, and you'll need to use mass and momentum to get them where you want them to go. Collecting the three stars on each level is optional and will usually require a little tricky building, especially if you're trying to circumvent any hazards that'll make your buddies pop. Simple, right? Well, it gets trickier when you have to use both your stickiness and your weight to figure out how to move and manipulate objects in your environment. Once the special powerups that bestow unique abilities on blobs become available, things get even trickier.

Though not necessarily a wholly original concept and possessed of some mildly obnoxious sound effects, Sticky Blobs is actually a pretty clever and entertaining game. The fiddly physics of some level contructs can be annoying, however, and the explosive fruit feels like it requires some awkward timing and placement to really pull off reliably. Still, the charm of the concept and trickiness of the levels makes this one worth checking out.

For the "fly" powerup, it took me way too long to figure out how to work it.

When it says "free me", it means remove the blobs that are touching it. I thought it meant "click it".

A well-done, fun little game. Only issue for me is the limited view of my goal and the screen auto-moving/shifting seemingly away from my target raspberry when growing blobs. I understand that this is part of the challenge, but I prefer a static, full-view screen.