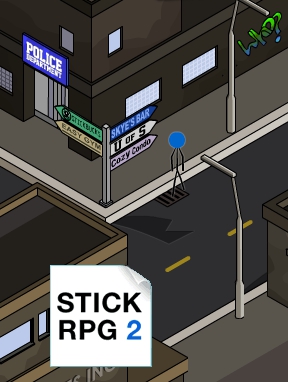 Way back in 2003, XGenStudios released the first version of Stick RPG. A semi-remix of the flash dating sims that were gaining popularity, it focused on humor and role-playing elements rather than scantily-clad anime girls. Whatever its inspirations, the tale of a Stickman trying to make it in an unfamiliar world was quite fun and quite well-received. And so fans eagerly waited for a promised updated sequel. And waited. And waited. And years later, Stick RPG 2, a huge open-world "realistic" role-playing session, has finally been released, barely beating Duke Nukem Forever out of the gate. Was SRPG2 worth the wait until "when it was ready"? Unambiguously, yes. Please note that you require a free XGen account to save your progress.

The game starts, like many RPGs do, with the character creation screen. After assigning points to your Strength, Intelligence, and Charisma, you are immediately thrust into the 2.5-Dimensionality of Paper Thin City. Using the [WASD] or [arrow] keys to walk and holding [shift] to run (or use your skateboard, if you have it), you make your way around the isometric landscape, exploring locations and buildings. To talk to one of the city's many inhabitants, you click them with the mouse (something that does get a little awkward while trying to run around), oftentimes gaining advice or a mission offer that will improve your stats, cash flow, or push your karma one way or the other. Your success at these missions depends on your stats, or your performance in one of several mini-games including boxing, gambling, and shoot-outs. All of them take time, and if you go too long without returning to your home based to sleep, there'll be problems. Each day is divided into four distinct sections: morning, afternoon, evening, and night, with different locations and missions available during each one. Generally, your immediate goal is exploration and being a sinner or a saint as you wish, but there is a meta-plot concerning the location of trans-dimensional artifacts... that just might be the key to returning to the third dimension once and for all. 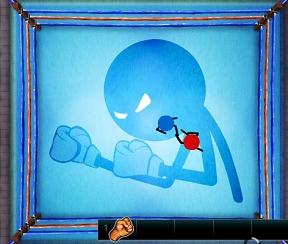 Analysis: At one time, Stickmen were only used by flash developers under limitations, technical or artistic. With the release of the Xiao Xiao series, however, the aesthetics's obvious uses in masking caused it to evolve beyond enforced simplicity. With the popularity of XKCD, it might be said that stick figures have entered a bit of an internet renaissance. Stick RPG 2 fits quite well into said resurgence and just might be the best Stickman game ever... Yeah, that's somewhat of a limited genre, but it would be a fine casual RPG regardless of its art-style: there's just so much to do. SRPG2 will more than please fans of the first and should appeal to those encountering the series for the first time.

There are a few points where the SRPG2 is... sticky: For one, the game map is so huge that there is quite a steep learning curve in just figuring out where everything is. Isometric perspectives can be beautiful, but tend to be be a little difficult to navigate, and SRPG2 is no exception. It doesn't help that the world map being more than a little cluttered: there are many buildings you can't enter, and even more that start out locked. Perhaps they will be filled (and glitches fixed) in the promised updates, perhaps not. In any case, the fact that the world is filled with enough content to get lost in, is both a pro and a con. Finally, the fact that you must have an XGen account to save is tolerable, but annoying.

(Incidentally, while most of the content is strictly the PG-13-ness of rating-o [suggestive but not obscene], there was one point of contention that review listhost found a little troubling: how almost all of the "gangster" NPCs in the game were a dark reddish-brown color, as opposed to the varied colors of the other characters. Personally, since its main purpose is to more easily distinguish your enemies from your light blue PC during combat sections, and their dialogue is so generic-badguy, I think it more an unfortunate choice of coloring than intentional stereotyping. Your mileage may vary.)

These concerns are minor, and even if you don't enjoy SRPG2 like I have (though I think you will!), at the very least you must admire what XGen has set out to do: creating a free-roaming sandbox of a city entirely in Flash, packed to the brim with choices. It's a setting that lives and breathes and doesn't wait for you. That it is filled with hilarious dialogue, fun minigames, and a pack of secrets is icing in the cake. It may leave you lost at first, but Stick RPG 2 is a game well worth sticking to.
Note: While the basic complete game is available for free online, a special director's cut with full-screen offline play, a full length soundtrack, cheat codes aplenty, exclusive updates and a one month pass to the Stick Arena Lab (w/exclusive character head) is available for sale on the main XGen site.

Thanks to Matt, Mellifluous, Caleb, and Billy for sending this one in!

You know, this was released way, waaaaaaaayy before. Like, a year ago. Nonetheless, it's a good game.

[Nope, it was released in December, and has received a few 'director's cut' enhancements since then. -Jay]

It's pretty good, and the addition of in-game trophies makes it better. Achievements FTW!

The game was fun for a while, but for some reason talking to the grey guy in the corner of the gym resulted in a dialog box with no text and no choices, so I had to restart.

Has anyone figured out the advantages to better housing? I just bought a condo and as far as I can tell, the only difference is location.

i used to play the 1st version for days, great game! would love to see them make another multiplayer game though...

I would be dissapointed for half a year of development, let alone seven. Bugs are almost everywhere, including skateboarding (AKA, the only thing that would make the glacially slow movement bearable). It's too slow, starting stats are useless for almost every job, and I spent most of the time walking around instead of, you know, doing things. Come on, guys.

Some "miniquests" that I've discovered and their rewards:

When you click on someone to fight, you can't cancel or leave the menu in any way! I got beaten up so many times from that.

What a colossal disappointment. I enjoyed Stick RPG 1, despite its flaws and bugs, and I was looking forward to an improved, bug-free experience. They certainly expanded on the first game, but they didn't fix any of the problems. Even with the skateboard, travel is still slow. And now there are multiple, larger screens to travel slowly across. To make matters worse, there's no button to jump back to your home at the end of the day. And there really should be a more detailed progress screen that shows your career progress and what you need for each next promotion.

After defeated the boss and went through the third (right) portal and started my game with my old stats.

But wait. My old character used to have the trait "Wall Street Wizard" - mildly useful. Now, now many how many times I reenter, I end up with Photographic Memory, this useless trait.

I had the same problem as JIGuest--got stuck after talking to a guy in the gym and having no option to click anywhere to finish the conversation. I would have had to restart, but after a few days of running around, making $13 selling milk or $5 flipping burgers, I wasn't interested in restarting. For a game made on an apparently large scale, it has quite a few issues. Lots of little things--like the fact that getting anyplace takes a long time, getting stuck on walls trying to exit a building, and the inability to cancel a fight once you've clicked on a fighter--made the game more frustrating than enjoyable.

Is anyone else unable to run diagonally down-left?

Good game, although plagued by bugs that force a restart of the game. A lack of autosaves compounds the problem.

Tips for reducing Karma? I want to get into the negative Karma professions, but am at over +400 right now. Things I've already done:

here's a good tip: make as much money as you can, then purchase businesses at the bank. just go to the business(es) you purchased every 14 days and collect the profit. it's an easy way to make money!

For those just seeing this now: the director's cut version is apparently 80% off - a price of $4 - on the Mac App Store. :D

does anyone know how to do the whole bit with Tiffany? cause i can't find her (this is after I returned the purse)

you have to make an account on the save screen

To all of you that are getting frustrated about the people that fight you as soon as you talk to them, that is not a bug, even Helpful Hank mentions it in the "tutorial". It's applying a real life situation, if you walk up to a gang and start chatting them up you can't just leave.

@gabe small
find all four trophemons and give them to the essentric millionare. you will get $1000 and negative karma

i need help what do you need to do to face the east side mob boss?

What do you do after

You return Kate's pencil and she gives you a watch?