Greetings from Boston, Massachusetts! (Just kidding, I'm back in Pennsylvania now.) Last weekend, gamers young and old flooded the streets of Boston and met in one giant convention center for PAX East 2013, three days of ridiculous gaming bliss. From tabletop to desktop, console to mobile and everything in between, pretty much any form of gaming you can imagine was represented. Last year I interviewed a handful of developers at The Indie Megabooth and Extra Credits' James Portnow, so how could I follow up that experience? Simple, do the exact same thing again, with better sound quality. (But slightly reduced video quality.) Check it out!

While a lot of major companies had booths showcasing upcoming products (DuckTales, anyone?), I spent a majority of my time checking out The Indie Megabooth, where over 50 independent developers were exhibiting their games. For the interviews I did with them over the weekend, I asked everyone to tell me about their game(s), what the inspiration for their game was, if the game was currently out (and on what platforms), and to sum up the game in ten words or less (more on this part in a bit). The sheer quantity of games featured here alone makes The Indie Megabooth worth visiting, but when you factor in how awesome all of the games are, and how the developers are standing right next to you to answer your questions or take feedback, you realize that you could happily pitch a tent and spend your entire weekend there, except they close the exhibition hall at 6 and security would probably get pretty angry with you. But anyway, check out the interviews! Links to all of the developers are available through The Indie Megabooth website above. 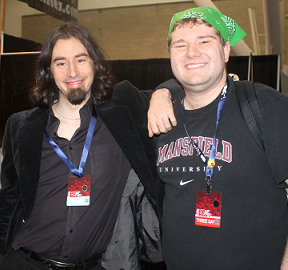 If you were lucky, you might also see a dapper young gentleman named James Portnow running around the convention center, giving lectures and hugs to all who approached him. (I just happened to meet up with him at the Digipen Institute booth at a pre-announced time.) The Extra Credits writer and I had a quick chat about the past year in games and advocating for games in society. Check out the video below, or read the transcript. (Note: Some editorial liberties were taken to shorten and clarify the transcript.)

Even if you look around here at PAX, the independent presense is incredible. We have seen such a growth of innovation because we've seen a growth in distribution and the ability to fund. It's been more than a year, but with Greenlight, with a lot of the different crowd-funding sources (Rockethub, Kickstarter, all these sorts of things), we've seen projects that would never see the light of day if we only had the triple-A industry, really making a difference here, impacting the lives of a lot of people. So that's probably the biggest thing, this growth of distribution, this further growth in ways to fund games that otherwise wouldn't get funded.

In terms of Extra Credits, over the past year, what was your favorite topic that you covered, and are there any new topics that came up that you want to tackle now?

Oh, there are always a million topics we want to tackle. As far as my favorite topics, I will confess, I like anything that allows me to research random things. So for example, the going over XCom and talking about the Fermi Paradox and that sort of thing, when I get to learn something new is always a blast for me. But in terms of more serious topics, in probably a month or two, I'm actually going to do some crowdfunding of my own for an advocacy fund for games, because I've realized I've been trying to get out there, especially now with all the gun control, "Oh no it's really games" stuff that's come up. I realized talking to a lot of different entities trying to get people out to Washington that we're totally reactionary. All we do is, everytime someone says "games are murder simulators," we go and try to convince people that we're not. We need to be more proactive. We need to teach people, get the discource to become "games can educate." Games can be used for science, they're a powerful cultural medium, to allow each other to walk a mile in each others' shoes. There's all these other incredible aspects of games that don't enter the public discourse, don't enter what you see on CNN or Fox News and we've really gotta change that. And so we're gonna do an episode talking about that and talking about all the other ways that games can be used without reducing the engagenent and how to bring that conversation to people who only see games in terms of the ads they see on tv. So that's a big one for me.

Just curious, how do you plan on following through, what are some of the means you'll be using in for this advocacy group, would what that involve?

That's a fantastic question. I've already reached out to everyone from the mayor of Belview, to the senator from Colorado, to a lot of people in sort of the existing political establishment, but there's a lot more than that. The first thing I want to do is establish an informational trip to DC with a group of other people working in this field employing a lot of people but thinking along the same lines. but the more important one--that's short term--the more important one is that all the time we talk about public funidng for games. And I think it would be great, and the amazing thing is it's already happening, the problem is that funding always gets the wrong people, you see edutainment, you see these horrible simulation games that maybe they know a lot about the field but they don't know anything about making games, they dont know anything about engaging people. And so really just starting opening that dialogue and allowing the people who are sort of in charge of distributing the grants, connecting them with people who can help direct those distributions to groups that understand that really or at least having other people who can vet what's going to be engaging what's going to be ineffective, because right now there's no open channel of communication, so establishing that is going to be one of the first things I plan to do.

You have the [Extra Credits] panel later tonight. What are some of the things you want people to take away from that panel, people for whom it might be their first time seeing you?

We've had a bunch of panels so far, and all of them have been fastincating to me, mostly one about games and sort of having larger accessibility. How do we serve people who may be disabled, who have things like ADHD or PTSD or any of these things. That one was fascinating. We just had one on what can we take from games, how do games transfer to our real-world lives, also amazing. In terms of our Extra Credits panel, all I'd like people to take away is that games matter and that we can do more, and that in this generation, no one should feel marginalized for playing a game. No one should feel like it's an embarrassing activity. This is something we should be proud of and proud to do.

Finally, here's a blooper reel moment for you to enjoy. When I asked all of the Indie Megabooth developers to sum up their games in ten words or less, I originally did so with the intent of stringing all of the summaries together in a compilation video showcasing the entire Megabooth in one ten-minute shot. Due to time constraints, I won't be able to put that video together (or at best, not soon), but I did snag a bit of intro footage in case I could ever get the video online. I wasn't expecting a terrifying visit from a familiar old face though...

Thanks so much for stopping by our booth (Frogdice).

Watching our interview it reminds me how worn out we were by the time you came by. We're both hoarse and trying to get as much information out there as possible as rapidly but clearly as possible.

I hope we did that.