The Lady of the Lake knows you've got to change with the times, so when a super steam powered jerkface of a knight storms your castle with his minions and boots you off into the horizon, she changes your sword for a fancy rifle in IriySoft's platform shooter game Steam King. After the long, long, long load, and a long, long, long (but cute!) cutscene, you can move with [WASD] or the [arrow] keys, and click to fire or use [Z] or [X] to do so too. Your health is in the upper left corner, and at the bottom you'll find a count of any grenades (launched with the [spacebar]) that you're carrying... these grenades don't carry between levels, so smoke 'em if you got 'em. Most importantly, however, in the top middle of the screen is your count of cogs, which you can spend at any time on upgrades by clicking the dollar sign icon to the upper right, which presumably sells them off to an interdimensional steampunk cosplayer. If you die, you'll be booted back to the last checkpoint you passed in each stage. 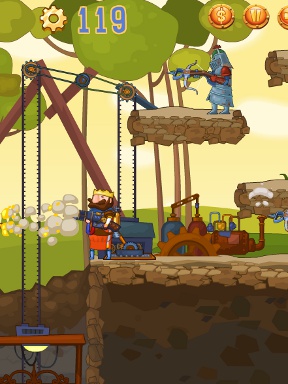 Steam King wants to be a goofy, fun, silly game, and it is, but it does feel like its pacing is holding it back. You have to be upgrades in specific orders, which makes it frustrating to have to spend precious, slowly amassed cogs on upgrades you might not want just to get to one you do. The levels tend to be nice and big, allowing plenty of opportunities to replenish your cogs, though they're also a little slow to showcase variety initially. Stick with it, however, and Steam King ups the ante nicely, with a lot of different enemies, hazards, boulders to push, power-ups to find, and more. It plays like a very classic platformer, allowing you to hop and blast away at most enemies incapable of stepping down off a ledge after you and only letting you fire in a straight line, but that's sort of part of the charm. It's a game I found myself having to warm up to because of how simplistic and easy it initially seems, but the more I played it, the more I found myself liking it. It's still a little clunky in movement and control compared to some other games in the genre, but its style and increasingly creative, sprawling levels, and classic boss battles earn a lot of marks in its favour. You could probably do without the annoying enemy knock-back when the flying enemies start bouncing you around like a pinball when they show up in number, and it make take a while to start really showing off, but Steam King is a quirky and challenging classic platformer that is a welcome addition to the genre.

Yet another game ruined by bad boss battles. I see no way to kill the train as the double jump isn't enough to avoid the attacks and I can't match his damage on me. Oh well, the first part was fun.

Takes forever to load, and then it st-st-stutters along. Looks great, but is unplayable.

You can beat the first boss by double jumping:

STRATEGY GUIDE -
Wait until he lowers his face shield.
Pop off two shots
Run towards him
Double jump over him.
Turn around.
Pop off two more shots before he gets his shield up again.
Repeat until bored/dead.

I thoroughly enjoyed this game. Great balance of levelling up and difficulty. The secret areas also lend the game a good replay value.

@JEBLIS All you need to beat the first boss is some strategically-placed shots. Double-jump and/or other upgrades not required.

@EXTRAFLUX I didn't experience an overly-long load time. No lags in gameplay, either. A browser or internet speed issue on your end perhaps? I'm playing on Safari with 50Mbps down.

I wish more casual games were this fulfilling.

Engaging, enjoyable game until level six when the game really started to lag so reloaded but got the same lag. Will try again later 'cause I'd like to continue. Am just finding secret areas and suppose there were more I missed earlier. I'm a little unclear about what some of the potions do. Is there an explanation guide within the game that I'm missing?

@JCFCLARK I don't see a guide anywhere, but...
After having played a while, here are some guesses:

CHALICE = gives you a halo of invincibility (aka "Sacred Aegis")

Fantastic game - greatly enjoyed it. Couple of thoughts on what would make it more interesting. Would be more re-playable if you knew how many secret areas were on each level, and how many you'd found already, so you could go back and get the ones you missed (after you complete the level, not the game). After beating the game, there's not much point going back. The game currently gives you unlimited lives - maybe there should be a hard mode with some set number of lives, or where you have one life but get the life regen from the start. Looking forward to a sequel! -M

Really fun little shoot em up, shame the two bosses are so hard! They aren't impossible though, but it's best to get all the power ups before facing the last one

Thanks for a lovely review and nice comments!