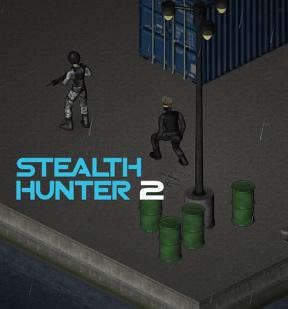 When a shipment of nuclear materials goes missing the fate of millions could be at risk and there's only one thing standing between them and total nuclear annihilation; you. In a

At the beginning of each mission you'll be given a host of objectives ranging from sneaking into heavily guarded areas to finding top secret plans. Navigating your unnamed agent through these missions is simple, using the [arrow] keys to move about with [spacebar] acting as a general purpose action button and [shift] allowing you to sneak around in silence. Meanwhile, a helpful tutorial system helps guide you through the several mini games that do a great job of changing the pace.

Ominous music and well crafted visuals set the stage for this surprisingly engrossing stealth action title. Control over your character is smooth and seamless, and seems to mesh perfectly with a difficulty that keeps this game fun and challenging while still not seeming too terribly hard. All of this is accompanied by a story that is at once generic, but still fairly well told with nice little details like eavesdropping thrown in to enhance the experience. Yes, it uses an isometric perspective which is always awkward thanks to foreground objects getting in the way and a somewhat awkward learning curve when it comes to getting used to your arrow keys, but Stealth Hunter 2 manages to make these issues seem at least tolerable. So if you're hungering for the feel of creeping past trained arm guards and dodging the watchful eye of security cameras from the comfort of your own browser, Stealth Hunter 2 is definitely something you'll want to check out.

Awesome game! Controls are easy to get used to, nice graphics, and good length of game. Played from start to finish in one sitting.

I loved the original, and I love this one as well. really well done.

The "hacking the terminal" was hilarious. I just bash at the keyboard and c++ code comes out. "someone has been stealing lunches."

There is some humour in this game. It is very dry, subtle and well hidden.

The hacking is hilarious indeed! At first I thought I had to type along, starting with a "#".. after I realized I could just smash the keyboard with my forehead it became so much easier. And funnier.

You can shoot cameras. :D

Great game. There was a bit too much trial and error in the middle, though. It could use a walkthrough...

Um... subtle, dry, and well-hidden are not synonyms for unnecessary running gag. In fact, it's rather the opposite.

This game is really easy. You never have to crouch walk. Just run up and mash space bar. There are only 3 stages where you actually have to shoot.