Undead Labs' State of Decay blends zombie apocalypse action adventuring with a survival simulation and RPG elements. As the game begins, you and your pal Ed have just returned from a two week long fishing trip, only to discover that apparently that's just enough time for the world as you know it to end. When the opportunity to join a small struggling group of survivors presents itself, it's the only option you have to stay alive... but how long can you last, and is help even coming? In this atmospheric story-driven post-apocalyptic game, you'll gather unique survivors, train your abilities, scavenge for supplies, and fortify your stronghold against zombies and even other survivors. But be careful... supplies are scarce and finite, and if the morale of your group begins to turn against you, there's no guarantee you'll make it to see rescue. Please note that this game is currently only supported with a wired XBox 360 or other compatible third party controller. Mouse and keyboard support is coming... though I was able to use it to play the game as of this writing with some patience and experimentation. 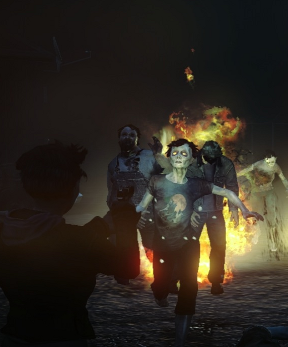 A lot about State of Decay will seem pretty standard initially. You've got a health bar, which naturally decreases with damage, and a stamina bar, which decreases with attacks and running and slowly regenerates over time. Perhaps more important, however, are your character's traits and skills. A character with the Powerhouse trait, for instance, is much stronger physically than another, while someone who is Eagle-Eyed is better with ranged weapons. Skills like Cardio and Melee become more efficient and useful the more you use them and level up. Though initially you can only play as Marcus, as you explore and complete missions, you'll unlock new characters with distinct personalities and abilities you can swap between. In some cases, you'll need to change characters, since certain story-related missions are best handled by a specific person.

These people, and other survivors you'll gather, are the core of your community, but unlike most simulations you can't just order them around as you see fit. Influence is treated as currency in the game, and while actions such as ordering a new facility built or establishing a new outpost, and even taking things from the community storage, costs you a certain amount of Influence, you can gain it back by successfully completing missions, returning with supplies (food, medicine, fuel, etc), and more. If you have enough Influence, you can even convince other characters to come and explore with you. You'll need to grow and expand your community if you want to survive long term... building gardens, infirmaries, repair shops and more take people and supplies, and are essential to your well being. Especially since supplies are finite... you won't find items magically restocked or destroyed cars respawned, so think carefully what you use and how you use it.

Just make sure to keep morale high, and remember that even when you stop playing the game is still going. State of Decay is a persistent world, and time will pass in it and the world will evolve even when you're not playing. Ignore the game for a few days when your community had a single sick person and you could come back to find a full-blown epidemic with zombies beating down your barricades. Make sure everything is supplied and safe, however, and you could find more things repaired and improved when you return. Note that the longer you are away from the game, the more this progression slows, so you don't have to worry about checking in every single day if you don't feel like it. 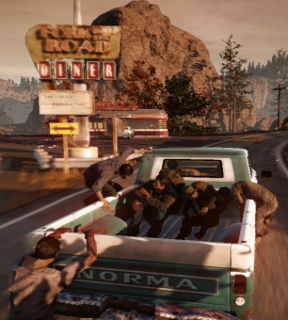 Zombies, naturally, are a big part of the game. In small groups, they're not too dangerous, and as long as you destroy the head they won't be getting back up. Large hordes are far more deadly, and you don't want one beating down the gates of your compound or on your tail while you're fleeing on foot carrying a heavy bag of supplies. Though in general they're attracted to noise and sight, which means breaking windows or driving a car around can be a bad idea if you're trying to stay low, the day and night cycles can have a big impact on how well they see. Nighttime, for instance, can be a pain for you to find your way around in the dark, but can allow you to sneak past zombies more easily... provided your flashlight doesn't attract them. Figuring out how to distract them or even just ditch them as you climb over fences and duck into the underbrush is essential... though when it comes to cleaning out infestations and dealing with what lurks inside, you won't have much choice but to get your hands dirty. 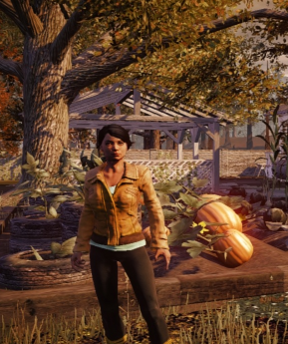 Analysis: In a lot of ways, State of Decay is basically what I was hoping Dead Island would be. The characters are more defined, the plot is more grounded (... relatively speaking for a game about the dead rising...), and the focus on survival feels more important than bludgeoning things to smears on the ground. With everything from weapons and ammo to medicine and vehicles being in limited supply, you're forced to pace yourself and play intelligently... which for a lot of us probably goes against our first instinct in an open-world game. Some characters are more interesting and fleshed out than others, and it makes me wish you could interact with them a bit more beyond simply ordering them around. Letting you simply chat with people would have gone a long way towards making you more invested in everyone's survival, making everyone feel less like expendable bodies and more like people you care about, though the little conversations that happen between characters on missions and exploration are a nice touch.

The fact that your newfound compound is incapable of making anything but the most basic decisions without you can start to grate after a while... waaaaah, find us food! Find us medicine! This person is bringing us down, take them out for some therapeutic skull crushing! Some autonomy would be nice, even if you had to assign it to them, just so you don't start feeling like the world's most underpaid babysitter. There's just not much else to do beyond catering to your compound through missions. This is where the lack of choice sort of stings too, since the linearity of events means you don't get to play as anything other than a fine, upstanding pillar of the community and leader. It's more Grand Theft Auto than it is Mass Effect, in other words, and for some players, that'll suit them just fine. Personally, I've always felt a horde of flesh-hungry beasts would have significantly livened up all of Niko's dates and provided that extra element of excitement to a night of darts and drinking with Roman.

It takes a little while for State of Decay to really get going, and the initial "tutorial" area doesn't really showcase everything that makes the game shine. While a lot of your time is going to be spent gathering supplies and survivors, more exciting events like zombie sieges do a lot to spice things up, forcing you to scramble to keep your barriers up with undead batter down the walls and you pick them off one by one. Establishing trust with your neighbours is also important and funnily enough, nobody seems to appreciate being accidentally set on fire even if you're trying to help, so watch those molotovs. Once new zombie types start being introduced, the game gets considerably more difficult, and more interesting. The game does a good job of doling out new things bit by bit, just enough to keep you following its trail of breadcrumbs and keeping it from getting stale. The main missions tend to be vastly more entertaining than the side missions, sadly, largely because those sidequests are so repetitive and bare-bones. Go here, kill those. Go there, get that thing. Come back, mollycoddle some idiot who's feeling a little sad about the end of the world. 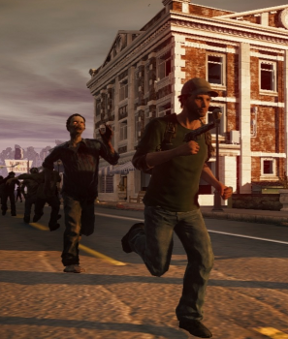 At the moment, however, the biggest frustration with State of Decay is that it's essentially a straight port from the XBox, and thus its keyboard and mouse control is only sort of functional. While a lot of the controls are standard ([WASD] for movement, [E] to interact, etc etc etc), many of the actions are bound all over the board and more than a little unintuitive to figure out, especially with the game constantly spitting XBox controller buttons at you. It's sort of baffling that even an "early access" title would arrive on PC without better PC support, and not everyone has a compatible controller or wants to (or is able to) spend money on one just to play one specific game. It is, fortunately, the developer's number one priority to implement, so if keyboard and mouse support is a dealbreaker for you, you might want to wait a while. Hopefully, the somewhat sluggish controls and reactions will be improved too, though I'd trade it for the ability to zoom a camera in and out. With the fixed over the shoulder perspective, it's too easy to get an entire facefull of blinding foliage when you're trying to sneak, also making it to get hung up on terrain or certain obstacles you can't see.

Visually, the game is gorgeous, despite a lack of any real expression of character faces. The town you find yourself stranded in tends more towards a quiet, scenic Greenvale-esque vibe than a thriving metropolis, but the gorgeous scenery and design makes up for it. There's a lot to explore, from outposts to establish to neighbours to find a befriend, and every inch of it is beautiful. If you're hoping for any sort of multiplayer, well, don't. You're not going to get that, but there is more DLC on the way, such as a sandbox mode that will take you to an entirely new town to survive for as long as you can... provided you can fix up an RV and find people willing to come with you. Though some aspects are more compelling than others, as an open-world story-driven zombie action adventure, State of Decay is still both a ton of fun and a lot more intelligent than many other zombie games ever even try to be. Though it suffers from repetition and, in this early access stage, it's fair share of glitches, it offers a unique and interesting twist on the zombie genre in a world that feels dangerous and alive. Or... undead. You know. Whichever.

Pardon my OCD, but I believe one of your tags is misspelled (earlyacess vs. earlyaccess) and it would be a shame if people didn't find this game due to a typo.