Starseed Pilgrim is a very, very unusual game. Created by droqen, author of Probability 0, it's best described as an abstract puzzle game with some light musical elements and a touch of sandbox-style gameplay. That doesn't do the experience justice, though, as its real value comes from the sense of exploration and wonder you'll get trying to figure out which seeds grow which blocks and what exactly you're trying to accomplish in this bleak world. 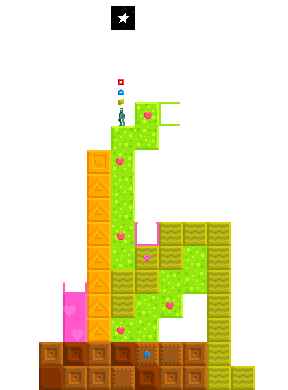 You control the so-named starseed pilgrim, a cosmic gardener armed with a handful of starseeds. Move and jump with the [arrow] keys, tapping [down] to remove blocks below you. You can also remove blocks to your side by running into them. Hit the [spacebar] to plant a seed. Different seed types are shown floating above your head, and each one does something different when planted. The orange seed, for example, quickly grows straight up or straight to the side. The pink seed moves much more slowly, but if you dig out one of these blocks you'll add another seed to your inventory. You wouldn't be much of a starseed pilgrim if you didn't have any seeds in stock, would you?

Starseed Pilgrim doesn't spell out goals or gameplay methods right in front of your eyes. You know something vague about the sky slowly dying, and you'll see the dark corruption chasing you as you grow your garden of blocks. You'll also find the inverted "flip" world that contains keys and hearts. What all of these things do and how they're connected is part of the discovery element of Starseed Pilgrim, and we're not about to spoil the feelings of awe, confusion and delight this game doles out with liberal abandon. Sit down with it and get lost in the experience. The more you don't know, the more fun you'll have.

You say you don't want to spoil the experience of discovery, but this review is probably the one I've read that gives away the most info on how the game works :/

The only thing the review gives away that you don't learn within the first 45 seconds is the bit about the pink blocks. I included that because it'll eliminate a lot of frustration for people.

I've played this for a few hours and I'm rather unimpressed so far.