Developed back in 2003 by Moonpod Games, Starscape may be considered an "oldie" by the gamer crowd, but it's a goodie. Launched as a shareware game without the distribution support that it has today, Starscape flew under the radar, slowly but surely gathering a respectable following. Today it's finally starting to hit the major distro sites and people are either discovering or taking a second glance at this little space shooter/strategy game created half a decade ago. 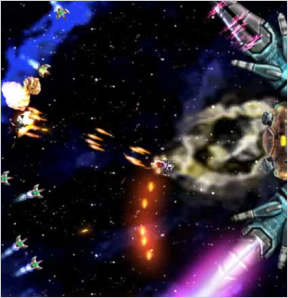 In Starscape, you play the captain of a fighter ship onboard a space station called The Aegis. After being sucked through an alien-made wormhole during a scientific mission, most of your fleet is gone except for a few key personnel. It's up to you and your crew to find out where you are, salvage raw materials and equipment and fight off hostile alien forces, all in the hope of returning home. The game is approximately 70 percent a top-down space shooter and 30 percent a strategy/simulation game. Most of your time will be spent controlling one of four potential spaceships, mining asteroids for raw materials and fighting alien forces. The rest of your time is spent onboard the Aegis station, managing your crew and systems.

After a nice animated introduction, you'll begin a tutorial that will teach you everything you need to know about both aspects of the game. You'll start by controlling your first spaceship, the Runabout. It doesn't feature the most battle-ready equipment available, although it can defend itself in a pinch. More importantly, it's equipped with a gravity beam that can tow resources in after you've blasted them apart from inside asteroids.

Default controls are a little counter-intuitive, but they can be changed in the menu options. Ship thrusters are controlled by the [arrow] keys to move you in the respective directions. The [Q] button fires your blasters and [E] deploys the gravity beam to reel in the resources. After a short time you'll be upgraded with missiles, launched with the [W] key. Since your space station is always in the same playing field you're in, you can use [R] to either call the station to your current location, or to instruct it to open its hangar doors so that you can dock with it. 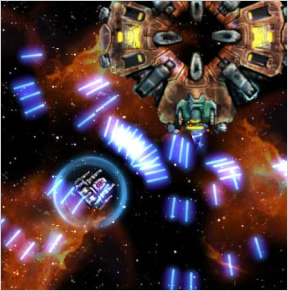 Your first few missions will be fairly easy and are explained by the tutorial. You'll be cracking open asteroids to gather resources and blasting a few stray alien ships apart. Aside from the resource collection, the element that sets this game apart from an Asteroids clone is the strategy aspect onboard the Aegis. Unless in combat, you're able to interface with the space station menus at any time, where a variety of functions are available. You can work with your chief engineer to build new ships and modify existing ones, outfitting them for specific purposes or designed to perform all-around. The security chief will help you build up the station's defenses, adding automated turrets or additional gravity beams to scoop up resources that fly by. The station's scientist can be used to build new items or upgrade existing ones, like the blasters on your ship, or the strength of its hull. All of these things—whether it's researching an upgraded missile system or building a fighter ship—require resources found in the asteroids and salvaged parts from certain alien ships you destroy.

Analysis: Fun. Old...but fun. Sure, it might not hold a candle to some of the epic space shooters and sims that we've seen like the classic Freespace 2, or newer titles like DarkStar One. But it's not meant to. Starscape is a casual space shooter/strategy game, and in that regard it succeeds. Although not without its flaws (mainly in the controls, which can be changed), this game finds a happy median between action and strategy that give you a breather from both just in time, before you get tired of one or the other. Just when you've had enough action and need a break, you can dock with your station, jump into warpdrive and work on upgrading your ships or researching new abilities. Unfortunately since it was designed five years ago, the largest resolution available is 800x600. Thankfully the art and graphics aren't ugly to begin with, offering a 2D, cartoonish on-station experience with emulated 3D space combat. For many people with older machines, this game will be a nice change of pace because it'll most likely run smooth as silk, even on 256MB of RAM. Check out the demo and give this overlooked game a try.

Oh my...
I love this site now.
I lost a demo of this in a system wipe, and I'm glad I got it back. Two. Whole. Years. Two years I had to look, and now it pops up in front of my face. I managed to destroy the mining ship before the time ran out. Now i'll buy it. My only advice for the mining ships is destroy the twelve teal boxes on the sides, and when that laser charges up, fire up the speed boost and don't stop circling!

I've been giving this a shot on my poor little Vista laptop. Had to switch things over to be compatible with WinXP just to get sound during gameplay sections, but other than that, it works just fine.

I gt an error and lost my 47 minutes of progress I think the error message was called Bad No but I forget what it said on it. It happened when I looked at the Map Key and then I pressed enter 'cause I was done looking at it and then pow BAD NO!!!!

This game is amazing. I should note, however, that the demo (assuming it is the same as when I purchased the game a couple of years back) highlights, more or less, the worst and most boring parts of the game. To get a better sense of the game's frequently epic combat, I recommend playing survival mode a few times, as this really comes closer to the true feeling of the game, though it lacks the surprisingly deep ship-customization aspects of the story mode.

I've been a fan of this site since early 2005 but Jayisgames is being overrun with games with price tags. I'm living paycheck to paycheck and the last thing I spend money on is games (very last, if ever). I need more Cave Stories, Poyos, and Might Jill Offs. I won't be buying any of these games.
No offense though, I still love you guys, you've filled a bumload of afternoons. Just not lately...

[Edit: The majority of games we review are free, and at a ratio of about 90%. We review download games on the weekends only, which this is from. It's a slow time right now for compelling new releases of free Web-based games, but we do have a few to post today. -Jay]

Oooh, this is pretty nice. It's almost like an RPG version of asteroids, with morer and betterer enemies.

One thing I didn't like though was the resource collection bit - it's kinda boring / tedious going around blasting asteroids and hoovering up the gems, and having three different gem types doesn't really serve much purpose, since they're all collected the same way. It's frustrating when your production is stalled on yellow minerals while green and purple are full, but every asteroid you blast just releases more greens and purples...

Still, the payoff when you finally research and build all the new parts for your next hull type and take it out for a spin is very nice :D and then you can get back to blasting aliens until you have more research to do...

One thing that I took to doing is listing which components sell for. This way, when I hit a stall, I can sell some of the lower-tech loot and begin making progress again. . . Your mileage may vary.