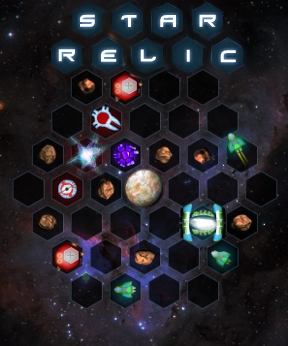 Exterminate! EXTEEEERRRMINAAAATE!... oh, sorry. I've been playing Indigon's turn-based science-fiction strategy game Star Relic, and it seems to bring out a side in me that is a little... um, anyway. Choose one of three different races (and select your gender where applicable) to play that species' campaign; each not only has different ships and abilities, but a different set of battles to win.

Regardless of who you're playing, the goal is the same; protect your warp gate, and destroy your opponent's. The battles take place on a grid with a planet in the center, the players on opposite sides, and various obstacles occupying other places. A handy tutorial in the first mission explains everything you need to know; just click on your warp gate to deploy ships when available, and click on a ship to issue orders to it. Each turn, you gain energy that you use to warp in different ships you can then direct about the battlefield and attack. When you're done, click the planet in the center to end your turn and start your opponent's. Reduce the opposing warp gate to zero hit points by attacking it with your ships to win, but don't leave yourself unguarded. Be warned; the game only saves after each mission. You can't save in the middle of a battle, which means you have to see each one to the end or lose all your progress in it.

After each turn, the entire battlefield rotates clockwise around the planet in the center of the screen. Why should you care? Because this orbit is different depending on how close you are to the planet, and not only does it shift obstacles around the playing field, but beneficial objects such as repair stations and energy sources as well that grant bonuses to anyone who has a ship stationed nearby. Fortunately, the lack of a timer means you can sit and mull over your strategy and plan your moves in advance. Might I recommend deploying an obscene number of warships and coming down on your terrified foes like the hammer of God? It's an oldie, but a goodie. 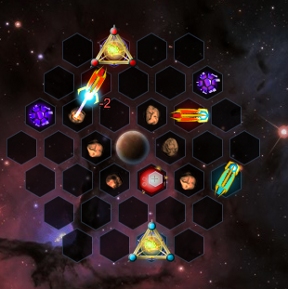 Analysis: Star Relic wasn't a game I expected to enjoy at first, but found myself quickly falling prey to "... five more minutes" syndrome. The presentation is extremely tight; while I might wish everything was a bit larger, the visuals are well designed, and the inclusion of voice acting makes the whole thing feel like a professional little package. The downside to voice acting, of course, is that most ships only have one audio clip they play over and over when preforming any particular action; when your enemy gives the same command to five identical ships, hearing the same clip five times in quick succession can set your teeth on edge. The endless looping music track for some species can likewise get old quick, but fortunately there's a button to toggle it right at the top of the screen so you can play something more appropriate. I don't know about you, but I prefer to do all my conquering to Black Sabbath and AC/DC.

There is a story involving a relic (surprise) being uncovered somewhere in the galaxy that both the humans and the reptillian Klossians have their knickers in a twist over, but it's mostly relegated to short text blurbs in between battles. Which isn't necessarily the kiss of death since, while sort of interesting, it isn't integrated well enough to be compelling. No, where Star Relic shines is its simple, point-and-click strategic gameplay The gameplay is extremely accessible and easy to pick up, with only one resource to keep track of and no complicated commands to master. It also features a pleasantly robust single battle mode that lets you select your opponent and choose from a variety of maps to duke it out on, in addition to allowing your chosen race access to all its technology from the get-go.

All of this combines to form a surprisingly addictive bit of galactic strategy that is as relaxing as it is involving. What's satisfying about Star Relic's gameplay is the knowledge that when things turn south, it's usually your own fault; it might not sound comforting, but knowing any failures are from your lack of planning rather than an unfair advantage to your AI opponents. If you're careful, you can usually think your way out of any battle, even if your chances for victory look slim. And if you're not careful, well... there's always openings in the star fleet maintenance department.

Not only does Dora write the best game reviews on the internet, she watches Doctor Who and can channel the Daleks. What a woman!

That's why we love you, Dora.

Wow, this is fun.
AAAAND +1 for Doctor Who reference.

Get it right. Cybermen are waaaaay more awesome.

The game is enjoyable, but it's too easy in my opinion.

I did the story mode as the lizard race and there was no challenge at all. I swarmed and it was over within minutes.

Then again, theres a certain charm to obliterating the enemy :3

I've just tried Sodinar only, and it rules. Nexus is a great bombarder. Starship can control the shift battlefield. And Quasar can finish an enemy base with 1 shot(if you have enough orbs, but that's not hard).

However, the ion cannon seems very powerful also. I mean, the attack range.

By the way, always take those energy reactor. 2 energies per turn owns 1 energy per turn. And 3 is much better.

Thanks for the review and the feedback :)
Hope everyone enjoys the game!

Now I've tried the alien race. Basicly you just need ion cannons, as they can destroy almost anything not very strong on their fire range. They pwns.

If you want to use alien, you can use ion cannons to clear asteroids, and auroras to take the strategic points(where you can stay with an energy reactor always adjacent to you). It's just that. Not hard at all.

And lastly for human force, missile frigates and defence platforms(especially with an +1 movement upgrade) will finish the stage, although not very fast.

The game is really a little too easy.

For the Klorians, it isn't the ion cannons that are important, but the Auroras. Auroras, once upgraded, move incredibly fast. They also have a natural range attack, and are cheap. A flood of auroras is essentially impossible for the AI to stop, and will kill their warp gate very, very quickly.

Would be a nice game , something like Spybot . But the AI is so dumb, whatever you do, you always win...

Wow, a highly original setup, turning the battle field, good graphics, funny sounds, distingishable races with their own traits. Love the game. The length of all 3 campaigns was also just right before the existing mechanics would've become a bit too dull. It even got an original story, well no deep hearthbreaking one, but an ortinal one.

Personally I enjoyed playing the klosians most, the aurora is IMHO actually the most powerful unit/per price. Can move almost anywhere with at most 2 turns, 2 damage for 1 cost each, distanced shots, dont care if one is lost, etc. So contrary to the race descriptions it are the klosians that feel more zergy. But the game setting is easy enough for plenty of strategies to work.

My only complaint would be about improving the computer AI, e.g. if it plays the klosians I've never seen it using teleports, or taking important points like energy reactors. So once you figure out the strengths of your race, its more a walkthrough than different strategic challenges.

BTW: If "EXTEEEERRRMINAAAATE" is refering to the ion core, I'm pretty sure it actually says "Illuminate", also fitting klosians peaceful style. No we dont want to kill them with than ion cannon, we just "illuminate" em "bringing the light" :-)

by the way, I love singing units, I'd to have a map what the Klosians sing about:

Phaser:
* Energized
* Beam me up
* Aproochiiing

The game hangs if I end my turn when Starcores are blocking all the orbits from moving. Does anyone else have this problem?

Wow...Dalek much? Just for that I am playing this game.

So, um, for those who say this is so easy, I have a question.

Does every level have asteroids forming a natural shield around the enemy base (but not yours, no, of course not), or just every level I've played? 'Cause that doesn't seem exactly fair or fun to me.

@JIGuest
Why don't you just wipe the asteroids out ?

Fun. It WAS easy - I beat story mode with Humans, Klosians and Sodinar, only the humans and the klosian suffering a single defeat. Even one of those defeats was "suspect," since I accidentally clicked on the central planetoid twice, thereby forfeiting my turn. Anyway, fun little time-killer. A larger playing field and smarter AI would help - many was the time my attack hung by a thread, only to see the AI concentrate on wiping out a single cheapo fighter, when I had a Quasar or Mothership within a hex or two of the enemy jumpgate.

It seems the best strategy is to flood the screen with cheap fighters. Farm energy, then bring in some big boys. The Sodinar "Quasar" ship can take out a jumpgate in one shot if you have plenty of orbs in play.

I really love this game, found human mode challenging but didn't lose once, playing as Klosians and aurora swarm+holding resource hexes equal easy win every time. I've lost once in the Deep Space level of the custom game, as humans in that level if you lose your juggernaut you're dead.

Anyway, it's really fun though it is a bit easy. I know how impossibly hard it is to add online multiplayer, but this game would be soooooo fun with that.

Nice, but... pathetic, push-over AI (specifically, they didn't go after resources, or know how to use teleporting units, etc...). Yet, I still had fun and played all three campaigns. I hope there's a sequel with better AI!

Oh, also the third campaign's writing was atrocious. Indeed, REALLY stupid writing on that last campaign. A let-down since I was continuing in order to uncover the mystery of the asexual race. Unfortunately they were quite LAME. Good game that had more potential. Maybe it's hard writing for aliens, but it seemed like the author gave up after the humans.

Just a few forgivable bugs during my play-through. Like units spawning off the grid for their first turn, etc. Again, nice game. Thanks!