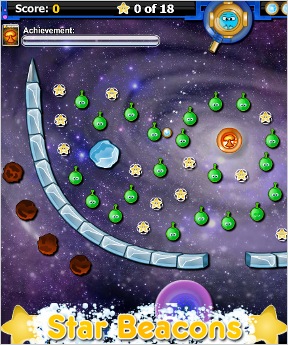 What happens when you take a galaxy of stars and frozen meteors and send a ship plummeting through it, bouncing off of everything it hits? The fourth seasons finale of The Jetsons! Ho ho ho... I kid, really. There were only three seasons.

OR! It could also be Star Beacons, a pachinko-style arcade game from Steel Panda Studios. When an evil space armada captures a planet of jolly water creatures who use a giant star as their source of light, it's up to you, an intrepid waterite in a cool spaceship, to scour the deepest depths of space to retrieve the pieces of your broken star/sun.

In each level, you'll find yourself positioned at the top of the screen with a bunch of stars, meteors, and other space creatures scattered below you. Use your mouse to guide the turret, and click to fire a pellet at the space matter below. Anything your ball bounces off of on its way down the field is removed from play. On the way down, you might also encounter frozen blocks that shatter on impact, solid meteors that can't be destroyed, and aliens shooting at your ball. Naturally.

There are twenty levels to conquer, as well as five unlockable bonus levels. Given the limited supply of balls to shoot, can you conquer each level and restore your star to full brightness?

Analysis: Hey, look, it's Peggle! No, not quite, but Star Beacons does bear a resemblance to PopCap's megaton downloadable. Beyond the fact they're both pachinko games, of course. It might be unfair to compare a free browser game to a years-in-development title from a huge studio, but it's impossible to play Star Beacon without thinking of Peggle. The resemblance isn't necessarily a bad thing.

For starters, the basic setup in Star Beacons, from the block arrangement to the visual style and overall cartooney atmosphere, is practically Peggle Light. Aiming works in a similar manner in both games, though you can't fine-tune your shots here, only use the mouse to aim and fire. The physics in Star Beacons sometimes feel a bit off, as a one pixel difference can send the ball flying in a completely new direction. Also, don't expect to find any power-ups other than the occasional exploding item. Star Beacons is straight-up pachinko.

Star Beacons isn't the first game to borrow from Peggle, and it certainly won't be the last. But what it lacks in originality it makes up for in faithfulness to the source and raw fun factor!

The game is also available to Play at Kongregate

I really do wonder what goes through the head of designers who make games that are just copies of games already made. I mean, I've made a Tetris clone, but that was practicing flash and I never showed anyone.

Anyway, the game was fun but I already own Peggle and it just made me want to go play that again. For what it is, they did do a decent job at it, although I did notice some of the ricochet physics were a little messed up. Though guide arrow did help predict this weird ricochet, although sometimes I shot at a circle despite what the arrow told me just out of stubbornness. "The ball could not go that way" I would say with glaring eyes. And then it did. And I was sad.

Another complaint is that aiming wasn't precise enough. It just felt a little clunky.

All in all, I just felt silly playing it, knowing I could just go launch Peggle.

This game is Peggle. No doubt in my mind about that. And I think its one thing to make a spiritual recreation of a game, its another completely copy a game and not give credit to that game. Now I dont want to sound like a jerk, but this is unorigianal.

I'd actually like to start seeing more Flash-based, Peggle-like games start to pop up from time to time. Peggle was one of the VERY few games in that genre that I really enjoyed.

And hey, they're great for people that never step over to the "download game" side of the fence.

Physics seem too slow. I have Peggle Nights, would rather play that.

It is the non-genuine version of Peggle.

I, for one, am too cheap and reluctant to use credit cards to buy games online, and am thus grateful for cheap ripoffs!

If you're going to show reflections off of ice, at least show accurate reflections. Similarly, if you're going to allow "path transparency" through ice, make it consistent! I lost track of how many times I had a beautiful little shot lined up (according to the path indicator line) past the corner of an ice cube and it blocked the $#%$#^% shot!

Did I miss JIG giving Star Beacons an Editor's Choice award? That's what the splash screen says (at least on Kongregate) and it links to this page.

Since everyone is entitled to an opinion, here is mine! Yes, the game is very much like Peggle but come on people let's face facts. Most people can only play a game so many times until they tire of it and want something new.
I enjoyed both Peggle and Peggle nights but after playing them over and over I was tired of them. I was looking for a game like Peggle but with different challenges. I found that with Star Beacons...yes I agree there are a few glitches in the game but overall I would give it a 4 1/2 star rating. I can't design games so I thank the people that do.....