I like you. You are mine now. So writes your stalker in a message pinned to the door. Many escape-the-room puzzle games operate on the premise that you're locked up as only teasing jest, a jocular amusement played between old friends before sitting down for an afternoon tea together. Unfortunately, that's not at all the case when you awaken inside Stalker Room Escape. Here, there is no lock on the door preventing your departure. Rather, you're held captive by a few meager words: a promise to kill you if you leave. That's the kind of devotion that makes you feel special (and, by special, I mean icky all over). 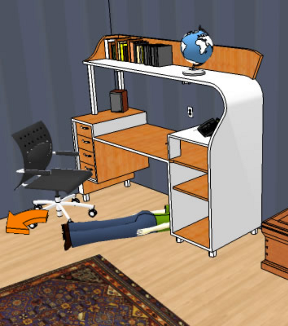 On this unnerving note, FireRabbit's three-part mobile game series begins. Your goal in each installment is to outsmart your captor by overcoming a slew of cognitive obstacles and maneuver yourself toward safety. Failing to do so has its own set of consequences as part of the multiple endings. Investigate your surroundings by tapping the screen to look around, under and behind; arrows will indicate where you can turn around or move back while finding interactive areas, clues and useful objects requires your tapping anywhere and on everything that seems worth a closer look.

Self described as "light-to-moderately challenging," the puzzles in Stalker Room Escape involve mostly logic and lateral thinking. Although occasionally the difficulty comes from trying to find or use items in a helpful manner. While the puzzles are esoteric at times, the free hint feature provides a nudge or, if desired, an outright answer, so mild bafflement doesn't turn into raging frustration. The navigation takes getting used to, especially the inventory, which works by touching the hand icon then selecting the needed item. Although it could be a source of vexation if you're used to friendlier layouts such as Robamimi's, the controls work well on the touch screen of your device. 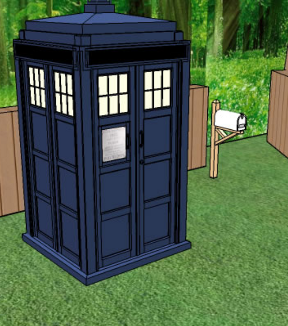 Stalker Room Escape's rough-hewn graphics seem kind of sketchy, but that's not a sign of a low quality production. Rather, the design is apropos. The piecework of flat drawings, computer generated images and stylized photography creates the same mood and tone as a ransom note, letters snipped out of newspapers and carefully pasted into words—quite well suited to the stalker theme. Adding to the creepy mood and tension in your sleuthing moments, situational complications and moral dilemmas present themselves as you progress, increasing the sense of accomplishment when you make a successful escape.

Each game in the Stalker Room Escape series works on its own, yet played together they're more satisfying with the linked scenarios. The first two games, Stalker Room Escape: Part 1 and Part 2 are good and enjoyable, but possibly not enough to inspire you to purchase the third. The concluding chapter isn't perfect, but it is truly better because of its increased content and overall production values. Plus, Part 3's plot heads in an interesting (although not wholly original) direction with the TARDIS-escent time travel device. This nifty trick adds dynamism, and a new layer of confusion, to the puzzle solving.

The whole lock-you-up concept is too creepy and disturbing to consider very deeply, and a bit odd to just make light of it; yet the trapped-by-an-obsessive-stalker contrivance does make for a some enjoyable gaming moments. To outsmart the trickster and overcome foreboding obstacles, even time itself—as it turns out, that is a special feeling, after all.

NOTE: This game was played and reviewed on an iPhone 4S. Game was available in the North American market at the time of publication, but may not be available in other territories. Please see individual app market pages for purchasing info.

I bought this a while ago when it was on sale. Pretty good escape game. Was only really stumped a few times on the third one. Worth the $$ though.

Shame they didn't put it out as a flash game.

Part three really is the best so if you liked 1 and 2, you'll like 3. Although, the other two are complete games on their own, just like any of the Bourne movies...but it's nice to have the third to wrap it all up neatly nonetheless.

OHHHH NOOOO!!
No WALKTHROUGH?!??
:(
I assume this is because the game is not playable on JIG?
I have been stuck in Part One for ages...I go back to it every few days to see if I see it in a different light. :(
BUT! I will keep trying, as the review by elle is a good one, and although there are only 5 comments...they are all positive ones.
(I am tempted to just skip to Part 3!)

We didn't do a walkthrough because there is an in game walkthrough. We often do make walkthrough for mobile games, though. But, what are you specifically stuck on? Maybe someone in the JIG community can help?