One part physics-based slinging game, one part RPG, and one part tactics, Squids from The Game Bakers is a many-layered game that gracefully passes gameplay elements back and forth, creating a dynamic but cohesive experience. While it starts out with a little Sling-like action, it ends up playing more like Ogre Battle, all without adding too much complexity or foregoing its casual roots. To top it off, Squids looks as good as it plays, featuring top-notch visual design and a storyline and characters that are legitimately fun to engage with! 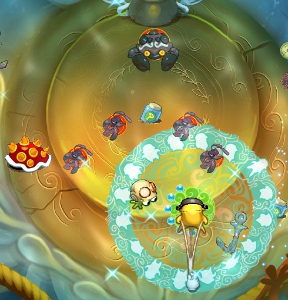 The basic mechanic of Squids: click one of your party members, pull back on their rubbery tentacles, then release to send them flying. The farther back you pull, the more ground (er, water?) the squid will cover. Slinging characters around is how you move through each level, how you attack enemies, and how you loot stages for all sorts of treasure. It's a solid, well-implemented mechanic that's both exciting and tactical, as it's great to see what happens when you ricochet off of three walls, but at the same time, you can't just go flinging these guys anywhere due to pits and other dangers.

Once you get this down, which takes all of a few seconds, you get to see what Squids really offers in terms of lasting gameplay. For starters, each character in your team has certain abilities, so choosing which order they make their moves requires some thought. Each level also has different goals and missions to work towards, from gathering stars to defeating enemies to just making it to the exit alive. Not all missions are a requirement, but the better you do, the more you'll have to work with when it comes to power-ups and team bonuses. 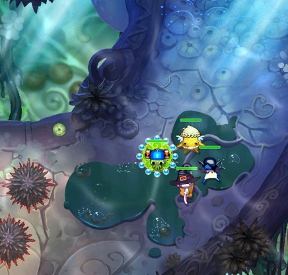 Analysis: Squids oozes entertainment from the very start, introducing three characters and showcasing their unique personalities. The story is genuinely interesting, something most games put little focus on in the modern market of fast-paced game development. The graphics are simply stunning, and even if you opt for the smaller-screen mobile version of the game, your eyes will love what they're seeing.

Squids features an in-game store that lets you purchase everything from new items to new squids, all by using pearl currency you pick up through adventuring. Characters also level-up and get stronger with more experience. The mobile versions of Squids play a little more naturally than the mouse-based Windows and Mac versions, owing to the more hands-on approach touch screens take to controls. The desktop versions look much better, though, as this is definitely a game to experience on a large screen.

Squids is a game that displays its creators' dedication to a fun, meaningful experience conveyed through a combination of instant gratification gameplay and slow learning-style strategy. It covers just about every base you could want it to cover, all while looking fantastic and keeping you smiling along the way!