Squid Skid tells a tale of two brothers just like any other: Sometimes they're the best of friends, sometimes they drive each other up the wall, and, naturally, the younger of the pair believes himself to be a squid when he is very much an octopus. What, don't all little brothers do that? But a bunch of squid-napping sailors have scooped up the smaller, slightly silly cephalopodian sibling and trapped him on their fishing ship. Good thing he's got his big (very big) brother in his corner! You'll have to release the Kraken! to, well, release the Kraken in this sliding block-flavored puzzle game from Wingon Studios. Rock the boat with the might of Big Bro's enormous tentacles, powered by the [arrow] keys, and slide Little Bro's cage to the key. True to the game's name, he'll keep on skidding until he hits something. And if you want that key, he's got to land dead on that sucker! Heh. Sucker. Get it? It's an octopus joke. Squid Skid has a lavish and eye-catching attention to detail, from the way the whole playing field tilts when you take action, right down to the adorable squid-shaped cursor. It's a pretty coat of paint, but thankfully, it's more than just camoflage for an everyday Sokoban game. 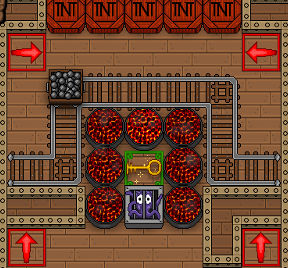 The game also features a nice array of obstacles to mix up the proceedings, such as mine carts that follow along specific tracks (on a ship? Your guess is as good as mine), and TNT crates that explode when they touch burning coals. By making you manipulate your surroundings as deftly as your cage, the game makes it levels far more interesting and involved than just "slide from here to there". The difficulty curve is actually fairly gentle, however. Although some levels can be failed by accidentally sliding your brother off the ship, there are very few where you can get "stuck" and are forced to restart, meaning there's little frustration. The game does encourage you to complete levels quickly and with limited moves by way of a rating system, but those ubiquitous three-star rankings aren't just for show! In a nice touch, they're actually used as part of the progress, and unlocking later levels requires a certain number of stars first. With enough stars, you can even skip over levels you're having trouble with! It helps you progress more quickly through the game while still providing incentive to find the swiftest solutions to every level. If you beat every stage, the game even rewards you with an extra challenge in the form of mirrored levels. Squid Skid is an easy-enough puzzler to be accessible to newbies, but it's got enough tricks and enough shine to keep even die-hard puzzlers entertained.

Level 7 appears to be broken... When I completed it, I didn't go to the next one and instead the controls locked up

It's an ok game but the scheme of perfecting earlier levels to collect stars in order to unlock more levels isn't for me. It's bad enough when games force you to beat each level to get to the next, but gating your own content this much just makes makes me want to move on from your game altogether.

The Fracken TNT locks up my game. When I blow it up, the playing field freezes. I can still control the game, and I can beat the level with 3 stars, but I need to refresh the page Every Time I beat a level that uses TNT. Please Fix This Headache.

To those experiencing issues: What browser are you using when you're experiencing these freezing issues? And is your Flash player completely up-to-date? Certain browsers sometimes have issues with Flash, especially if it's not up-to-date (I know Chrome can be an offender, although I played on Chrome and did not experience any issues).

There's a place hall of fame for bad game design for making people collect extra stars just to move to the next level.

I've always wondered why sliding your brother's cage into the water means you fail to rescue him when he's a squid and belongs in the water anyway.

Granted, he's still in the cage, but are you telling me an octopus big enough to tilt a ship like a pinball machine can't bust open a little cage? And why doesn't his brother just squeeze through the bars?

I may be overthinking this a little.