Isn't it about time you had a good old fashioned quest? Spud's Quest by Chris Davis is a retro-styled platform adventure that draws inspiration from classic games such as The Legend of Zelda and the Dizzy series. It takes place in a fantasy world complete with items to find that unlock new areas, a sprawling map with non-linear pathways, and plenty of characters to interact with. A metroidvania, if you will, and a frightfully good one at that! 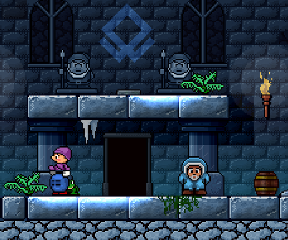 You play the roles of Spud and Prince Charming, the former a round little hero and the latter a real prince that has been cursed by an evil wizard and turned into a frog. The story follows the pair as they travel through the kingdom to uncover ancient stones that can banish evil and remove the curse. Which, incidentally, has turned the king and queen into frogs, as well.

Your basic actions allow you to walk, jump, hang onto ledges, talk to characters, and pick up/use a (very) small inventory of items. Everything you'll need to get started in this vast pixel world. Later you'll unlock even more abilities that let you do things like push/pull objects and swim. Prince Charming plays a little more than a side role in Spud's Quest, as well. You can switch characters with the press of a button to send the Prince off on his own, allowing him to manipulate some simple environmental objects to allow Spud to pass through. 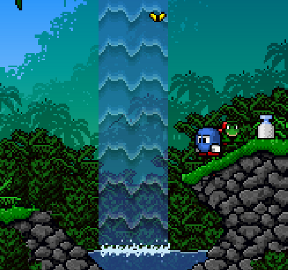 Analysis: Spud's Quest screams "old school" from every stationary screen. Beyond drawing inspiration from classic games and looking like a retro title, it perfectly captures the feeling of excitement and exploration those old games conveyed so well. The world in front of you seems like it's filled with secrets, many of which are dangling right in front of your eyes. In order to capture them, you'll have to find a new item, open a hidden path, solve a puzzle, or just get really good at jumping from platform edges.

The inventory limitation in Spud's Quest is occasionally frustrating. You can only hold a handful of items at a time, and if you try to pick up something else you must first drop an existing item. This forces you to be thoughtful and thorough, but on the other hand, it can create a lot of backtracking to re-collect old items you sat down. It's not a game breaker or anything like that, just something that'll make you grumble "aw maaaaan".

Spud's Quest is a love letter to the best of the retro metroidvanias out there. It's instantly enjoyable but provides plenty of challenge and exploration with just the right dose of humor. Go on, jump in. That frog's not gonna turn itself back into a prince, you know.

I'm trying to get into the mines, having been to see merlin.
I've got (or have access to):

I've been running around like a crazy person, and I can't work out what to do next. Halp!

Power of posting! got it.

for anyone else stuck at the same spot:

it's on Merlin's island

it's the bag of gems

I need help with the Earth Temple. I'm to the point where I think I need to be able press the two buttons in Medusa's room and I have no idea how to do it.

There's a free demo available on the site as well - is that worth mentioning here?